I'm back now from England, where I was visiting my sister for the holidays, but also got a chance to see some great theatre.

On Boxing Day, I went ice skating at Canary Wharf, and in the evening we had tickets to see Hadestown at the National Theatre. Unfortunately, the intimate show got a little lost in the larger space of the Olivier Theatre, though it was still nice to hear the music again live. 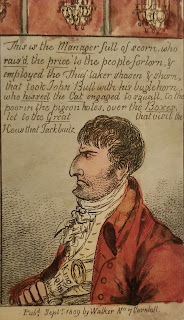 As I previously wrote, I visited the Foundling Museum the following day, where there was a small exhibit on the actress Kitty Clive. They also had on display a famous cartoon lampooning John Philip Kemble and the Old Price Riots. Portraying Kemble as "King John" it makes reference to an old nursery rhyme, stating:

This is the Manager full of scorn,
who rais'd the price to the people forlorn.
& employed the Thief-taker shaven & shorn,
that took John Bull with his buglehorn,
who hissed the Cat engaged to squall,
to the poor in the pigeon holes, over the Boxes.
let to the Great that visit the House that Jack Built.

The House named in the rhyme is Covent Garden, which Kemble rebuilt at great expense, then raising the prices of tickets to recoup his investment. When protests broke out inside the theatre, Kemble hired thugs to enforce decorum, but that apparently didn't stop crowds from hissing the opera singer Angelica Catalani, the Cat in the poem. 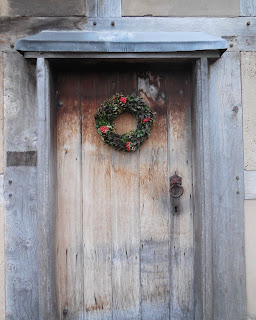 Friday, we took the train out to Stratford-upon-Avon to see Timon of Athens. The play was done quite well, but I was mostly excited to see the hometown of William Shakespeare. I hadn't been to Stratford since the 1990s, and while I got to see Shakespeare's grave at Holy Trinity Church then, I missed seeing the Bard's birthplace. This time, the birthplace was at the top of my list of things to see. It was decked out for the holidays and quite a sight to see, as was Holy Trinity at night. I wandered about the graveyard, much to my sister's consternation, but it was incredibly picturesque.

We spent the night in Stratford, and in the morning visited the site of New Place. The house, which was once the grandest in Town, was bought by Shakespeare after he became successful, but its owner in the 18th century burned it down out of spite. So what is there to see now? Beautiful, beautiful gardens. Though New Place no longer looks like it did in Shakespeare's day, it is well worth seeing. It's also right near the Chaucer's Head Book Shop, where I picked up a couple of choice finds, and while you're in the neighborhood, make sure to also check out the Guild Chapel. 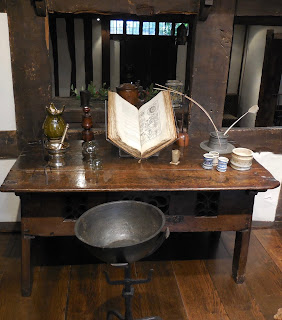 A little further away is Hall's Croft, where Shakespeare's daughter Susanna lived with her husband, the doctor John Hall. The building is remarkably well preserved, and also has a nice garden. It also had (appropriately enough) an exhibit on period medicine. Though Shakespeare never lived in the house, he was likely a frequent visitor. Walking around, you still get a sense of the type of atmosphere that surrounded Shakespeare in Stratford.

We had to get back to London for Sunday, though, when we had tickets to see Christopher Marlowe's play Doctor Faustus at the Sam Wanamaker Playhouse. Seeing the show by candlelight was a real treat. The following day (New Year's Eve) I visited the Tate Britain, where they had on display a portrait of Mary Ann Yates in Arthur Murphy's play The Orphan of China, itself a reworking of a zaju play by Ji Junxiang. 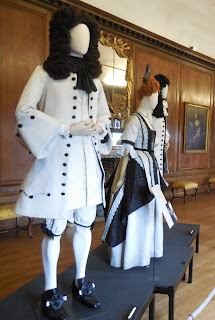 After welcoming in the New Year, we visited Kensington Palace, which had on display costumes from the recent film The Favourite. After touring the palace, we went to the Victoria and Albert Museum, where I of course had to see the theatre collection. They had on view the Royal Patent which Charles II gave to Thomas Killigrew in 1662. That patent gave Killigrew a near monopoly on theatre produced in London, though he still had to compete with William Davenant, who had a similar patent.

I spent most of the following day in Greenwich, where (among other things) I toured the Queen's House, designed by Inigo Jones, who also designed masques during the Jacobean era. That night, we had tickets to see Danai Gurira's play The Convert at the Young Vic. I enjoyed the play thoroughly. However, the Young Vic is located dangerously across the street from The Bookshop Theatre, where I picked up a few more books to load down my luggage for the return trip.

The next day there was a trip to Pollock's Toy Shop, where I picked up the colored prints to make a toy theatre of Oliver Twist. I already have a modern toy theatre of another Charles Dickens novel, Great Expectations, but that is a modern design. These prints are facsimiles of actually 19th-century designs. When I will actually have time to build a toy theatre with them remains to be seen, but I'm glad I have them. 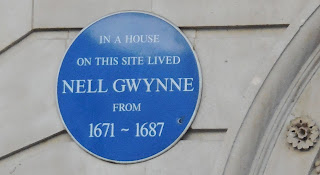 My final day in London was spent on another Dickensian errand: visiting the newly rediscovered portrait of the author at Philip Mould & Co. While on my way there, what did I pass but the site of the house where the actress Nell Gwyn once lived!

So it was a trip with many theatrical connections. It's good to be back, however, and now I need to settle in and do some writing. Happy New Year!
Posted by James Armstrong, Playwright at 7:43 PM