I'm currently in London visiting my sister for the holidays, and today I went to The Foundling Museum, in part to see a small exhibit on the 18th-century actress Kitty Clive. 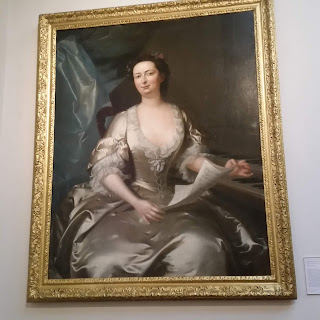 No, Clive was not a foundling, but the museum also houses a collection related to the composer George Frederick Handel, who was intimately involved with concerts raising money for the Foundling Hospital in London. Clive participated in these concerts, and in fact sang in the first London performance of The Messiah.

Clive was also a playwright, but of short dramatic sketches like Every Woman in Her Humour rather than full-length works. Her acting gained the respect of Horace Walpole, Henry Fielding, and other great writers. She played Portia opposite the Shylock of Charles Macklin, and later acted regularly with David Garrick.

Before she was discovered, Clive was lodging in a house across the street from where the Beefsteak Club, a collection of men involved with the theatre, used to meet. She was supposedly singing a song while washing the steps to the house, and the members of the Beefsteak Club, having their windows open, heard her and were immediately enchanted. In 1728, at the age of 17, she joined the company at Drury Lane, the most prestigious theatre in the country,

Clive did not always get along with management, however. Eventually, she had to defend herself and her right to make a livelihood in a pamphlet called The Case of Mrs. Clive Submitted to the Public. Some scholars have speculated that Fielding might have aided her with the prose, but the general consensus is that the force behind the pamphlet was Clive herself.
Posted by James Armstrong, Playwright at 3:33 PM