The Restoration-era playwright Aphra Behn dedicated her comedy The Feigned Courtesans to "Mrs Ellen Gwyn" better known today as the actress Nell Gwyn. In her over-the-top dedication, Behn claims that future generations will be missing out, "since all the pictures pens or pencils can draw, will give 'em but a faint idea of what we have the honour to see in such absolute perfection." 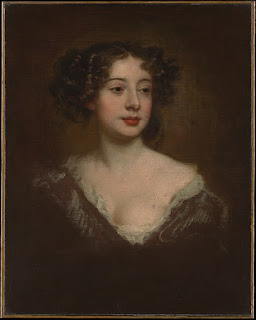 Many pencils, pens, and paint brushes have left us with more than faint ideas of what Gwyn looked like. Numerous portraits of her survive, including this study (thought to be of Gwyn) by Sir Peter Lely. According to Behn, Gwyn possessed "an eternal sweetness, youth and air, which never dwelt in any face" but hers. When Gwyn speaks, Behn tells us, "men crowd to listen with that awful reverence as to holy oracles or divine prophecies, and bear away the precious words."

Gwyn came from rather humble origins. Supposedly, she got her start in the theatre as an employee of Mary Meggs, better known as "Orange Moll." Meggs received a license to sell fruit in the Theatre Royal opened by Thomas Killigrew on Bridges Street, and later relocated to Drury Lane. As one of the "orange girls" of the theatre, Gwyn would hawk fruit for sixpence and possibly serve as a go-between connecting wealthy audience members with the actresses backstage.

After less than a year of this, Gwyn became an actress herself, making her stage debut at the age of fourteen. Shortly thereafter, she appeared in John Dryden's The Indian Emperour, playing the the daughter of the Aztec Emperor Montezuma.  Her love interest in this drama was the Spanish conquistador Cortez, played by Charles Hart. Gwyn and Hart went on to be frequently paired on the stage, but generally in comedies, to which Gwyn was more suited. They went on together in James Howard's The Mad Couple and in Dryden's tragicomedy Secret Love, or The Maiden Queen.

Actors on the Restoration stage frequently caught the eyes of the nobility, and by the summer of 1668, Gwyn seems to have become the mistress to no less a figure than King Charles II. In spite of being a royal mistress, she continued to act, appearing in Dryden's An Evening's Love among other plays. We know she appeared in Dryden's two-part The Conquest of Grenada in 1670 and 1671. Dryden even had her speak the prologue to the first part, in which she wore a broad-brimmed hat and proclaimed:

This is the hat, whose very sight did win ye
To laugh and clap as though the devil were in ye.
As then, for Nokes, so now I hope you'll be
So dull, to laugh once more for love of me.

James Nokes was a comic actor like Gwyn, but Gwyn it seems would be leaving the stage very soon. In 1670, she gave birth to a son by the king, and the following year Charles II set her up in a brick townhouse on Pall Mall. Did she ever return to the stage again?

Well, Behn's play The Rover, which was first produced in 1677, clearly credits a "Mrs Gwin" as playing the role of Angelica Bianca. Behn's subsequent play, Sir Patient Fancy, which premiered the following year, also credits Gwyn in the cast. Since The Feigned Courtesans with its dedication to Gwyn came out in 1678, it would seem that the actress came out of retirement to perform Behn's plays, and then received a grateful acknowledgement.

Many theatre historians, however, demure. How could Gwyn have been absent from the stage for six years, and then make a come-back without great comment from the gossip mongers? They suggest a certain "Anne Quin" might be the "Gwin" in question. Are they right? Who knows?

In any case, both the textual evidence of Behn's plays and numerous anecdotes of the period suggest Behn and Gwyn knew each other, and quite possibly worked together as well.
Posted by James Armstrong, Playwright at 9:55 AM