Thomas Southerne wrote his play The Fatal Marriage with the actress Elizabeth Berry in mind. In his dedication of the play to Anthony Hammond, he wrote of Berry, "I made the Play for her part, and her part has made the Play for me."

Though Berry took on the leading role of Isabella, Anne Bracegirdle, who played the cross-dressing Victoria, also excelled in the original 1694 production at Drury Lane. It was Bracegirdle who recited the play's prologue, claiming:

For Criticks now a days, like Flocks of Sheep,
All follow, when the first has made the leap.
And, do you Justice, most are well enclin'd
To censure Faults you know not how to find... 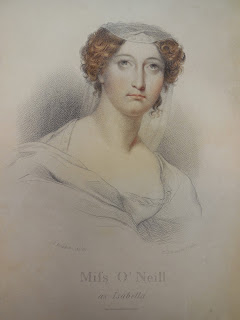 Southerne had written two failed comedies before he found his niche writing tragedy with The Fatal Marriage, so it should come as no surprise he was skeptical of the critics. As it happens, though, The Fatal Marriage was a hit, not just in Southerne's day, but for future generations as well. In 1757, David Garrick revised the play for Susannah Cibber, retitling it Isabella after its leading character. Subsequent actresses including Sarah Siddons and Eliza O'Neill went on to star in this version.

The plot for The Fatal Marriage comes from Aphra Behn's novel The Fair Vow-Breaker, just as Southerne would subsequently adapt another Behn tale, Oroonoko, for the stage. Unlike Behn's heroine, however, Southerne has Isabella be honorable throughout the story, making the role a favorite with performers trying to emphasize their own respectability. Though supposedly widowed, Isabella puts off her suitor, Villeroy, since she is poor and "the Unfortunate cannot be Friends." Thus, she does her duty to her former husband, but seems to be looking out for Villeroy as well.

Isabella's father-in-law turns her out of his house, though, and even fires two servants for helping her. The unfortunate woman has a young son, and it seems to be for his sake that Isabella begins to consider Villeroy's proposal of marriage. He pays off her debts, asking nothing in return. Isabella is understandably grateful, and her brother-in-law Carlos (for his own reasons) urges the match. At last, she accepts him, but asks him never to press her to put off the mourning attire that accompanies her "melancholly thoughts."

When it comes time for her wedding day, though, Isabella does indeed take off her mourning clothes, sensing that "Black might be ominous." Indeed, the wedding has cause to be ominous, since in the following act, Isabella's first husband Biron returns, very much alive, despite supposedly having been killed in a war. When he confronts Isabella, she falls into a swoon. After she recovers, she becomes distracted, unable to tell him what has transpired since his departure.

The fifth act earns the play its designation as a tragedy. Isabella draws a dagger upon Villeroy as he is sleeping, but as if to make it clear she is mad, Southerne has her switch from poetry to prose at this moment. In any case, she is unable to do the deed, and in order to prevent herself from making such a fatal error again, even considers suicide.

Isabella eventually dies due to severe mental distress. Southerne pokes fun of himself in the play's epilogue:

Now tell me, when you saw the Lady dye,
Were you not puzled for a Reason why?
...
We Women are so whimsical in Dying.
Some pine away for loss of ogling Fellows:
Nay some have dy'd for Love, as stories tell us.

Isabella, it seems, has died for love, and that, I think, is part of the reason the play came to be such a success. Everyone loves a good, tragic love story.

Posted by James Armstrong, Playwright at 7:16 AM