Because Queen Elizabeth I never married and bore no children, when she died in 1603, she left no clear heir. Fearing civil war, Elizabeth's chief advisor, Robert Cecil, proclaimed King James VI of Scotland as the new king. James was the son of Mary, Queen of Scots (a cousin of Elizabeth whom the English queen had executed for treason). Now King James I of England as well as King of Scotland, James took up residence in London and set up court. His reign, known as the Jacobean era, saw an even greater flowering of drama than England under Elizabeth.

The king had a literary bent, and while still in Scotland had written several books, including a work on witchcraft called Daemonologie. He personally took on the patronage of Shakespeare's company, which became known as The King's Men. No doubt in part to please his new patron, Shakespeare wrote Macbeth, a dark tragedy featuring one of the king's ancestors (Banquo) portrayed in a particularly good light. Also not surprisingly, the play featured witches, another great interest of the king. James had a notoriously short attention span, however, and The King's Men probably had to abridge plays performed at court even more drastically than they had to under Elizabeth. 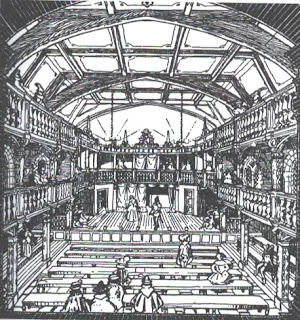 During the early years of James's reign, Shakespeare produced some of his greatest plays, not only Othello and King Lear, but also the dark comedy Measure for Measure, and the Roman tragedies Antony and Cleopatra and Coriolanus. In 1608, Shakespeare became part owner of an indoor theatre known as Blackfriars. Though located within the city limits, the theatre was on land formerly belonging to a Dominican monastery and so was legally outside the control of local politicians who disapproved of plays. The King's Men now had a second permanent theatre, and it was one where plays could be performed year-round. Though the audience and performers were protected from the elements, the theatre had to use candles to light the stage, which was an expensive proposition.

The Blackfriars Theatre was a smaller, more intimate space than the Globe, and it charged a considerably higher admission, guaranteeing an exclusive clientele. Shakespeare's later plays, including Pericles, Cymbeline, The Winter's Tale, and The Tempest, while also no doubt performed at the Globe, display a level of sophistication and subtlety that might have been influenced by the new theatre. Also, while plays at the Globe were performed without intermission, the Blackfriars Theatre required multiple act breaks in which expiring candles could be replaced. This led to the break-up of plays into five acts (following the model of the Roman playwright Seneca) with musical interludes played between acts. Nobles who paid extra could sit on the stage at Blackfriars, likely to the consternation of actors.

One Elizabethan dramatist who successfully made the transition to the new style of the Jacobean period was Thomas Heywood, whose play A Woman Killed with Kindness was performed in the first year of James's reign in England. Like the city comedies of the era, Heywood's play focuses on middle-class characters, but in the genre of tragedy, instead. Jacobean revenge tragedies, which took inspiration from plays like The Spanish Tragedy and Hamlet, were particularly popular. Notable among them is the anonymous play The Revenger's Tragedy, sometimes attributed to Cyril Tourneur (author of The Atheist's Tragedy) and sometimes to Thomas Middleton (author of another revenge drama, Women Beware Women). Middleton later collaborated with William Rowley (author of The Birth of Merlin) on The Changeling, a play that explores forbidden love and madness.

However, John Webster is generally considered the master of Jacobean revenge drama. His play The White Devil seems to have been a failure when it was first performed in 1612 at the open-air Red Bull Theatre. His later plays proved more popular, perhaps because they were presented in the more intimate Blackfriars. Not long after the debacle of The White Devil, The King's Men performed Webster's masterpiece The Duchess of Malfi, based loosely on the events surrounding an infamous Italian duchess a century earlier. The play not only proved a hit, but it received numerous revivals for years to come.

Theatrical entertainments at court frequently involved the courtiers themselves on stage, and sometimes even members of royalty. These elaborate spectacles came to be known as masques. They involved music and dancing as well as poetry, and writers of masques were often accomplished poets. Though English courts had performed masques even before the reign of Henry VIII, these entertainments particularly thrived under James I. During his reign, Ben Jonson became the predominant writer of masques at court. 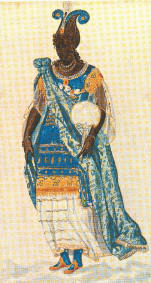 In 1604, Jonson co-wrote a court entertainment called The Coronation Triumph together with Thomas Dekker. The following year, the court performed Jonson's The Masque of Blackness, in which James's wife Queen Anne took a leading role. Other masques followed, with Jonson writing about one entertainment a year for the court. In 1611, he introduced the king's heir, Prince Henry, to the court, with the masque Oberon, the Faery Prince. Not all of these performances met with approval, however, and the audience dealt harshly with Jonson's 1618 masque Pleasure Reconciled to Virtue. The failure might not have been all Jonson's fault, though. Prince Henry had died six years earlier, and Pleasure Reconciled to Virtue marked the debut of James's younger, physically frail son, Prince Charles, who was the new heir.

Jonson's collaborator in these masques was Inigo Jones, an architect and stage designer. Jones had traveled to Italy and brought back Italian scenic techniques, especially those of Andrea Palladio. As time went on, the costumes and scenic designs for masques took on greater importance, and Jonson's words receded into the background. The great writer commented in verse on the meteoric rise of the scene designer, writing:

Oh, to make boards to speak! There is a task!
Painting and carpentry are the soul of masque.
Pack with your peddling poetry to the stage:
This is the money-get, mechanic age!
To plant the music where no ear can reach,
Attire the persons as no thought can teach
Sense what they are: which, by a specious, fine
Term of the architects, is called design!

After 1634, Jonson stopped writing masques, but Jones continued designing the popular entertainments. His greatest design was probably for Salmacida Spolia, a masque written by William Davenant for celebrations at the beginning of 1640. By that time, Prince Charles had become the decidedly unpopular King Charles I. The king cast his political enemies in the masque, hoping to win them over to his side. His attempt at reconciliation failed, though, and two years later civil war would break out in England.
Posted by James Armstrong, Playwright at 8:26 PM