The Thane on the Big Screen 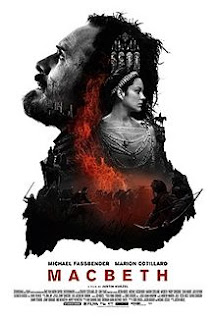 Shakespeare never wrote a tragedy without laugh-out-loud jokes, just as he never wrote a comedy that didn't have a serious side. Kurzel's film strives for unrelieved gloom, though, so it cuts not only the hysterical porter scene, but also every laugh line in the play.

Of course, it's not just the laughs the play eliminates. Very little of the original text remains. Instead of communicating the story through poetry, Kurzel uses ponderous shots that dwell upon battlefields, castles, and the two enormously good-looking leads, Michael Fassbender and Marion Cotillard.

As the film begins, we see a dead child of the Macbeths, and then soon after a young man (presumably Mac Junior) dies in battle. The couple's painful lack of heirs becomes even more painful, and it doesn't help that the three witches frequently carry babies and are accompanied by a suitably creepy little girl.

These witches are the highlight of the film. The scars on the faces are never explained, and don't need to be. Their dead-pan delivery of many of their lines works, and Lady Macbeth's scenes in churches (in one scene staring at a depiction of the Last Judgement, with poor souls being carried off to Hell) make the audience wonder how different Christianity is from the warped morality of the Weird Sisters.

Personally, it was Shakespeare's poetry that made me fall in love with his plays, so I found the mud-filled images a poor trade-off for the missing text. Keep in mind, however, that I've seen some pretty amazing productions of Macbeth recently, including a surprisingly good version by The Public Theater's Mobile Shakespeare Unit earlier this year and last summer's even better version at the Park Avenue Armory featuring Kenneth Branagh.

Films frequently have other aims, however, and this version does benefit from one of the better Lady Macbeths I've seen in a while. Cotillard appeared last year in James Gray's film The Immigrant, and once again she gives all she has to a project, even if the follow-through on the concept isn't entirely successful.