Last night I attended the Public Theater's Shakespeare in the Park production of Cymbeline starring Hamish Linklater and Lily Rabe. Make your plans to see it now. This is a production you're not going to want to miss.

The Public's summer offerings at the Delacorte Theater can be hit or miss. I was mostly disappointed by The Tempest earlier this year, though last summer's King Lear was amazing. Daniel Sullivan, who also directed Lear, helmed this production, which boded well. 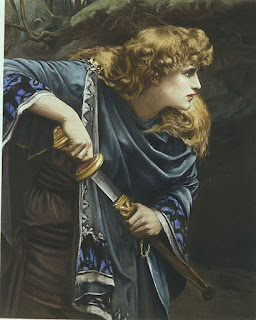 Earlier this week, going up to Belvedere Castle, I spied down into the Delacorte to see if I could get an idea of what the set looked like. I couldn't, which meant that walking into the theater yesterday was a bit of a surprise. Set designer Riccardo Hernandez has constructed a circular faux-grass stage on top of the regular stage at the Delacorte. The green circle is literally framed by a golden proscenium decorated with a golden eagle and sun, and surrounded by various bric-a-brac of Western civilization, including reproductions of some of the paintings you can see at the Metropolitan Museum of Art not far from the theater.

On either side of the stage-within-a-stage are rows of green seats with audience members. Yes, if you go to this production, you might be seated right up there with the actors. Here's what it says of the show's website:

Due to the intimate nature of this production of CYMBELINE, there will be a limited number of seats on The Delacorte stage. Guests in these seats will be required to adhere to a certain set of rules in order to ensure the safety of both the actors and the audience. These tickets may not be requested, however, some guests may be solicited by staff to fill those seats on the day of the performance at The Delacorte Theater.

It looked like the Public staff selected these audience members from the back and side of the audience, where there were some empty seats during the show. But beware! You might also be given lines. During the opening sequence, as actors David Furr and Jacob Ming-Trent set up the story, some of these audience members read questions assigned to the "two gentlemen" in the first scene of Shakespeare's text.

Furr and Ming-Trent constantly reappear in the show as various lords, soldiers, courtiers, and eventually as Guiderius and Arviragus, lost sons of the king. In fact, there is so much doubling the entire cast of characters is portrayed by only nine actors. Linklater plays both Posthumus and his rival, Cloten, a pairing I've also seen used by the British company Cheek by Jowl. Kate Burton is crazy sexy as the evil queen, and then later a perfectly believable old man as Belarius. Perhaps the most fun piece of double casting is Teagle F. Bougere as both the Roman general Lucius and the physician Cornelius, leading to some quick-change antics in the final scene.

That last scene, in which wonder upon wonder is revealed, is the heart of the play, and the production does it all brilliantly. We see ever-increasing joy bestowed upon King Cymbeline, played lovingly by Patrick Page. Lily Rabe, in the cross-dressing role of Imogen, strikes a balance between forgiveness and chastisement, and Steven Skybell warms our hearts as Pisanio, the put-upon servant of Posthumus.

Perhaps the most lasting element of the production, however, will be the original music composed by Tom Kitt of Next to Normal fame. Kitt provides a delightful lounge-lizard number for the villainous Iachimo, played by Raul Esparza with such sleaze you expect a trail of slime everywhere he goes. The funniest song, however, is Cloten's:

Hark, hark! the lark at heaven's gate sings,
And Phoebus 'gins arise,
His steeds to water at those springs
On chalic'd flow'rs that lies;
And winking Mary-buds begin
To ope their golden eyes.
With everything that pretty bin,
My lady sweet, arise;
Arise, arise!

When read on its own, this might just seem like bad poetry, but Shakespeare, perhaps the greatest poet of all time, put it into the mouth of Cloten, one of his densest idiots. This is intentionally bad poetry, and Kitt gives it a fun, playful melody. The cast, too, is game in singing the silly words.

The most famous song in the play comes in Act IV:


Fear no more the heat o' th' sun
Nor the furious winter's rages;
Thou thy worldly task hast done,
Home art gone, and ta'en thy wages.
Golden lads and girls all must,
As chimney-sweepers, come to dust.
Fear no more the frown o' th' great;
Thou art past the tyrant's stroke.
Care no more to clothe and eat;
To thee the reed is as the oak.
The sceptre, learning, physic, must
All follow this and come to dust.
Fear no more the lightning flash,
Nor th' all-dreaded thunder-stone;
Fear not slander, censure rash;
Thou hast finish'd joy and moan.
All lovers young, all lovers must
Consign to thee and come to dust.
No exorciser harm thee!
Nor no witchcraft charm thee!
Ghost unlaid forbear thee!
Nothing ill come near thee!
Quiet consummation have,
And renowned be thy grave!

For me, Loreena McKennitt's mournful version will always be the gold standard for this song, but Kitt gives it a very different feel, reminding us all that death is just another part of life.

In his own day, Shakespeare's plays were always followed with a jig, and in keeping with that tradition, the cast ends the performance with a lively dance number, which even incorporates a few period steps.

My only regret about this production is that it cut the dream sequence in which:

JUPITER descends in thunder and lightning, sitting
upon an eagle.

We miss that classic Shakespearean line: "Thanks, Jupiter!"

Ah, well. The Public more often errs on the side of too few cuts to the text, so I'm glad they kept this production from being excessively long, though it was still quite a bit more than the "two hours' traffic" Shakespearean audiences would have enjoyed.

For tickets, you can wait in line in Central Park, sign up for the virtual line, or do what I did, get in the cancelation line starting around 6 pm and try your luck. Whichever method you use, seeing Cymbeline will definitely be worth your while.