"Hang not on my garments"

The most noticeable oddity, however, was one of pronunciation. Waterston pronounces the home city of his character as Milan, the way we normally pronounce the name of that city. However, to fit in with the meter, it really ought to be pronounced Milan. (It's a trochee, not an iamb.)

For instance in the second scene of the play, Prospero says: "Thy father was the Duke of Milan, and / A prince of power." If this is regular iambic pentameter, it should scan: "Thy FA-ther WAS the DUKE of MI-lan, AND a PRINCE of POW-er." Why the change? Perhaps the Public wanted to make the play more accessible for an audience less familiar with the mechanics of verse. Still, it threw off the meter, and to me sounded very odd.

Prospero caries a staff and wears a magical cloak. In this production, that staff is a wand-like stick, and the magical cloak is a flimsy cape that hardly covers his back. Though each production is welcome to reinterpret great characters, I certainly don't picture Prospero holding a twig and wearing a fringed shawl. 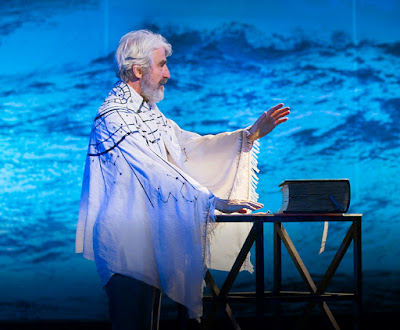 I went leafing through some of my books, and I came across a great sketch of Charles Kean in the same role in 1857. Now THAT is a cloak! Perhaps I am being too critical, and maybe this is a time to heed Prospero's injunction to "Hang not on my garments." But since I've already brought up Kean's 1857 version, I can't help but mention that Charles Dickens and his interminable houseguest Hans Christian Andersen attended opening night of that production. Here's what Andersen had to say about it:

The entire opening scene was shouted out... while the act curtain was still down, and when it rose, great, heavy waves rushed forward towards the footlights. The entire theatre was a raging sea, a large vessel tossed forth and back, filling nearly the whole stage.... The masts fell, and soon the vessel itself disappeared beneath the heavy seas; this was managed, as Dickens told me, by means of a complete ship of air-tight canvas which had been pumped up, and from which they suddenly released the air. The great body collapsed like a rag and was hidden by the waves, which towered to half the height of the stage....

Sound impressive? We haven't even gotten to the magic part yet.

Ariel's first appearance was highly poetic and lovely. As Prospero called him forth, a shooting star fell from heaven and touched the turf; it shone in blue and green flame, in which one suddenly saw Ariel's beautiful, angelic form. All in white he stood, with wings from his shoulders to the ground.... Each revelation of Ariel was different and beautiful. At one point he suddenly appeared hanging by his hand from festoons of vine leaves; at another he floated across the stage in a mechanism which was hardly possible to discern....

Though practically minimalist in comparison to such elaborate productions of The Tempest in the Victorian era, the Public's production, directed by Michael Greif, does has its moments. The masque is quite lovely (with Iris being played by a gifted aerialist), and the reconciliation scene was affecting, once Waterson quieted some of his bluster and began to relate to the other characters on a more human (and humane) level. The play also features original music by Michael Friedman. 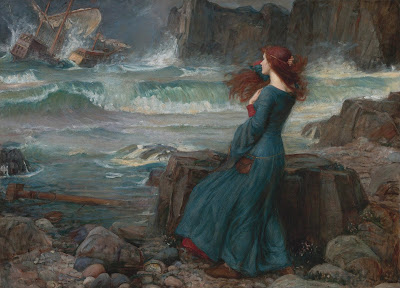