A warning to all those planning on seeing Amazing Grace on Broadway: Bring extra tissues. You will need them.

A warning to all those not planning on seeing Amazing Grace on Broadway: Make plans. You are going to want to see this.

A few years ago, I ran into Arthur Giron, an old mentor of mine, at a reading of one of my plays he had graciously come to see. He told me he had been asked to work on a new musical about John Newton, the man who wrote the song "Amazing Grace." If you don't know Arthur, the author of Edith Stein and other amazing plays, he was the perfect person for them to ask. 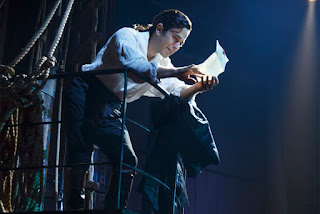 "They said they wanted me," Arthur told me at the time, "because I understand redemption." This is a story of redemption, inspired largely by Newton's autobiography Out of the Depths. Newton was a pretty terrible human being, scorning his father, abandoning the woman who loved him, and worst of all, up to his neck in the slave trade, and enjoying every minute of it.

After hitting rock bottom, though, and miraculously surviving a storm that should have killed him, Newton felt God had given him a second chance at life. He returned to England and joined the abolitionist movement, and because he had once been a part of the slave trade, he was able to expose its darkest secrets.

Newton was also a songwriter, and in addition to Amazing Grace wrote scores of other hymns. It was another songwriter, Christopher Smith, who was inspired by Newton's story to write this musical. Though Newton's song is clearly the star here, Smith is no shabby composer himself. I particularly liked the witty "Expectations," sung by Chris Hoch as Major Gray, Newton's rival for the hand of his childhood love, Mary Catlett (played by the wonderful Erin Mackey). 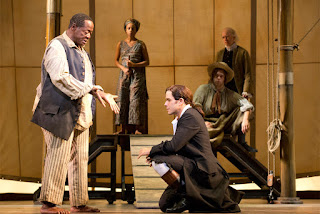 Josh Young plays Newton, and is totally convincing both as a good-for-nothing wastrel and as a conscience-stricken convert trying to do what he can to atone for past sins he can never quite undo. He is particularly good in the second act with songs like "Testimony," but also when reacting to other characters. There is a particularly tense scene between Newton and his former slave Pakuteh (played powerfully by Chuck Cooper) where you don't know if Pakuteh will embrace Newton or throttle him, and indeed, Pakuteh probably doesn't know himself.

Director Christopher Gattelli, ably aided by associate director Kim Weild, spares no expense in this production. The costumes, sets, lighting, and staging are magnificent. The act one curtain certainly beats any falling chandelier or rising helicopter of Broadway's past, with the added benefit that this time the spectacle is actually used in aid of the storytelling, and not just as a showy add-on.

After President Obama sang "Amazing Grace" in South Carolina, it seems that interest in the show has been growing, so I recommend seeing it soon. More information here: 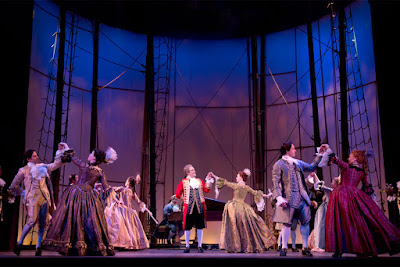 Posted by James Armstrong, Playwright at 7:30 AM