Last night I saw Anais Mitchell's Hadestown at New York Theatre Workshop. The play gets off to somewhat of a slow start, but it builds to become an emotionally moving reimagining of the Orpheus and Eurydice myth.

Rachel Chavkin, who previously directed Natasha, Pierre & The Great Comet of 1812, helms this production, starring Damon Daunno and Nabiyah Be as the ill-fated lovers. And just so we know they're ill-fated, the fates themselves appear on stage, as a trio of women who provide the role of the chorus.

The burly, bearded Chris Sullivan seems on odd choice to play the god Hermes, but he is surprisingly effective as the show's narrator, guiding us down into the underworld and back again. Make no mistake about it, though--the heart of this show is the immortal power couple of hell, Hades (played by Patrick Page) and Persephone (played by Amber Gray).

I loved Page as the titular king in The Public Theatre's production of Cymbeline in Central Park, and it was great to see him again on stage in the recent revival of Spring Awakening. While I had heard him sing before, never had I heard him like this, dipping down into the lower reaches of a gravelly bass voice. His rendition of "Why We Build the Wall" is nightmarish, and when he later softens at the song of Orpheus, the world itself seems to be changing.

Having a song that can make stones weep is a tall order, but Daunno's trilling falsetto voice works on you like nothing you're likely to hear in a traditional Broadway score. And as Persephone, the magnificent Gray champions the young lovers, both during her spring revels above the earth and throughout her marital strife with Hades below. Gray, who was a replacement for the role of Helene in the original production of The Great Comet, will be reprising that part on Broadway this fall.

But don't wait until then to see her! Hadestown is playing until the end of the month. Catch it while you can! 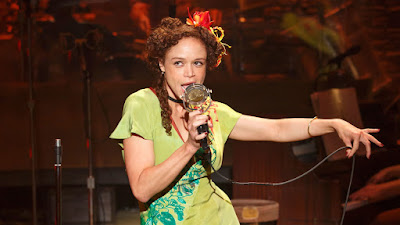 Posted by James Armstrong, Playwright at 11:52 AM