Last night, I saw Deaf West's wonderful production of Spring Awakening. While I was excited to see this revival, the original musical opened on Broadway less than a decade ago. This begged the question: Why is Deaf West doing this play now?

I found my question answered as soon as I opened the Playbill and found this director's note:

In 1891, Frank Wedekind's highly controversial and socially indicting play, Fruhlings Erwachen (Spring Awakening), was published in Germany and subsequently banned. Eleven years prior, the Second International Congress on Education of the Deaf (known as the Milan Conference) passed a resolution banning sign language in schools across Europe and the United States, declaring Oralism (lip reading, speech and mimicking mouth shapes) superior. The term given to Deaf students unable to succeed with the abusive oral method was "Failure," the same word that sends young Moritz Stiefel down his destructive path.

Deaf West's production makes Spring Awakening not just about the educational system of a hundred years ago or so, but specifically about the educational system for the Deaf at that time. Moritz, generally considered the most sympathetic character in the play, is played by a Deaf actor (Daniel N. Durant) and voiced by a hearing actor (Alex Boniello) who also plays guitar. This pairing of two different performers is used for a number of parts, though other roles, such as the central figure of Melchior (Austin P. McKenzie), are played by actors who both speak and sign. 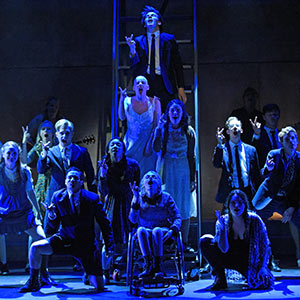 While I was prepared for that, I was not prepared for the brilliant use of supertitles in the production. We first get a taste of the supertitles during a scene where the male students are getting a Latin lesson. At first, Latin appears on a blackboard, with hearing students dutifully reciting it and Deaf students trying to spell it out. Quickly, however, we get the supertitles used in even more creative ways. Best of all, they are used for the benefit of both Deaf and hearing audiences. Sometimes, an actor might speak without signing, but the words will appear in a projection. Other times, an actor will sign without a spoken voice, but with supertitles for those who don't know ASL.

As a hearing member of the audience, I greatly appreciated the moments when the Deaf actors were allowed to perform without being voiced (and the voice actors had some pretty incredible pipes, so that's saying something). In the first act, Moritz has a scene with his father (Russell Harvard) that is performed nearly entirely in silence. The contrast with the very loud rock score creates an added intensity that is perfect for the moment. Even more powerful is the moment in Act II when Wendla (Sandra Mae Frank), who is normally voiced by musician Katie Boeck, vocalizes for herself as she confronts her mother.

The musical version of Spring Awakening takes liberties with Wedekind's original text, including changing the ending, but while this is a very different show from the play, it succeeds on its own merits. The songs by Duncan Sheik and Steven Sater (with frequently indecent lyrics) hit just the right tone for certain moments.

This revival also features some incredibly gifted performers, including Marlee Matlin, Camryn Manheim, and Patrick Page (who was brilliant in this summer's production of Cymbeline), as well as some younger performers to watch for in the future, including Krysta Rodriguez and Ali Stroker.

If you want to see the show, hurry, since it's a limited run ending January 24. You can get more information here:

Spring Awakening
Posted by James Armstrong, Playwright at 10:17 AM