Sophia Lee's tragedy Almeyda, Queen of Granada ran for five nights at Drury Lane in 1796. That might not seem like a long time, but plenty of tragedies had shorter runs in the preceding decades, and the London stage hadn't seen a truly remarkable tragedy since Hannah More's Percy in 1777. 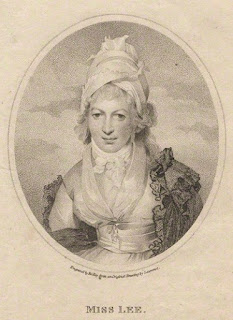 The success of Almeyda (such as it was) came largely from its leading lady, Sarah Siddons, who played the titular queen. Lee dedicated the printed version of the play to Siddons, and said she never would have written a second play (after her 1780 foray into comedy The Chapter of Accidents) if it hadn't been for the great actress.

"Not all the various charms you dignify the Drama with, can equal those of your sympathizing mind, and unassuming manners," Lee wrote in her dedication to Siddons. In a special advertisement to the reader, Lee went on to say that one "must have wanted taste and feeling, not to have been animated, by the exquisite talents of Mrs. Siddons" and that she was proud to have been "the means of displaying, in a new point of view, her various powers."

Though Lee created an original story for Almeyda, she acknowledged a debt to the Caroline playwright James Shirley. The play's prologue, written by Lee's sister Harriet, plays homage to other tragic writers as well, including William Shakespeare, Nicholas Rowe, and Thomas Otway. It urges the audience to cherish the "spark divine" of tragedy which had been all but extinguished in recent years:

Ah! gently fan the flame! lest fashion's breath
O'er the pale promise send the blast of death;
Nor let the wreath Thalia only wear,
Her sister muse deserves so well to share.

Thalia is the muse of comedy, and the comic works of Richard Brinsley Sheridan, Oliver Goldsmith, and John Gay continued to hold the stage even as tragedy had languished. However, according to Harriet Lee, tragedy "mends the morals while it fills the heart." Using strikingly gendered terms, the prologue urges the audience to not just enjoy making fun of folly and vice in comedy, but to "own the manly privilege to feel."

The title character in Almeyda is a Moorish princess who was raised in the court of Castile after the Spanish conquest of Granada. She converts to Christianity and falls in love with Alonzo, son of the King of Castile. However, at the start of the play, international politics call for Granada to be returned to the Moors, and for Almeyda to be installed as queen there. She remains devoted to Alonzo, but wonders if he will continue to love her, or if his patriotic duty to Castile will triumph:

Ah, no! For nature here makes distinction;
Forms man's large heart for many a various duty,
And blends his passions into a republic--
While woman, born for love and softness only,
Delights to feel love's absolute dominion!

This may sound sexist, and indeed it is, but perhaps not in the way it first appears. Remember, this was first performed in 1796, when the British monarchy was at war with Republican France. Patriotic audiences in London might well have cheered on the "absolute dominion" of woman while scorning the "republic" that represents the fickle heart of man.

Almeyda's uncle Abdallah seeks to control the throne of Granada by marrying her to his son, Orasmyn. Though Orasmyn is in love with his cousin Almeyda, he is too honorable to accept a forced marriage and hopes to truly win her heart. She, however, does not trust the policy of men. She recognizes that her honesty is not prudent, but she gains strength from the seeming foolishness of straight-forward sincerity:

--I would like you be guarded, prudent, selfish;
Preserve a silence might ensure my safety,
And rest upon the future.--But my soul
Disdains the mean, the temporising wisdom,
Nor knows to tremble in the cause of truth.

In Act III, we meet Alonzo, who was originally played by John Philip Kemble, the younger brother of Siddons. Like Almeyda, he is more passionate than judicious, and sneaks into the enemy palace at Granada in order to see his love. As he explains:

In vain would time, or distance, wrest her from me,
She, she alone, can shield me in the war,
Or nerve my arm at the fierce battle's onset.

Abdallah catches him though, and secure in the knowledge that no one knows Alonzo snuck into Grenada, imprisons him in a dungeon without fearing retribution from the Castilians. Orasmyn, out of both his own sense of honor and the love he has for Almeyda, rescues his rival Alonzo. Unfortunately, when Almeyda descends into the dungeon with her own rescue plan, she finds it empty and concludes that Alonzo has been cast into a gaping chasm. Her uncle appears, and she again uses honesty as her weapon against him, claiming:

I will have such revenge!--From thy black heart,
At once I'll pluck away its worldly veil,
And punish thee in mere sincerity.

In the final act, Abdallah realizes he will never get Almeyda to marry his son. He tries to get her to abdicate, and when that fails, he poisons her and then himself. As she is dying, Almeyda reconciles Alonzo and Orasmyn:

Orasmyn's gen'rous heart is virtue's temple!
Alonzo, dear Alonzo! honour--love him...
--And now, indeed, farewel!--A hand for each.
This gives away my crown; and this, oh! this,
The faithful heart that's in it!--I am cold;
And these dim eyes seek vainly for Alonzo!

Though Almeyda did not make its way into the permanent repertoire of Drury Lane, the performance of Siddons drew positive reviews. Lee's tragedy, even if it never became famous, added to the fame of Siddons by giving her acting a chance to shine.