Last night I saw Adrian Bunting's play Kemble's Riot at the New York International Fringe Festival. It was a fun show, and reminded me of the facts surrounding the "Old Price Riots" at Covent Garden in 1809.

To understand the story, you have to know a little bit about John Philip Kemble. He was one of the great British actors of the eighteenth century. Kemble was in his 50s and perhaps already past his prime in 1809. He often appeared opposite his (more talented) big sister, Sarah Siddons.

My first encounter with Siddons was seeing this portrait of her as the Tragic Muse, painted by Joshua Reynolds: 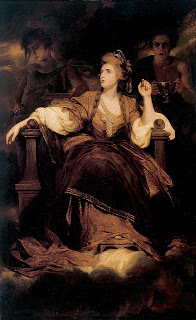 The picture always stood out to me in art history books, not just because it is stunningly beautiful, but also because it has to do with the theatre. I didn't know who this Sarah Siddons was, but I wanted to find out.

Siddons first came to prominence in 1774 when she played Belvidera in a revival of Thomas Otway's Venice Preserved. This was only a year after she married the actor William Siddons. William never reached her level of fame, however, and she instead tended to play opposite her little brother.

Kemble gradually rose to fame playing such roles as Raymond in The Count of Narbonne, an adaptation of Horace Walpole's The Castle of Otranto. He frequently appeared with Siddons in Macbeth, in which both garnered acclaim for their passionate and realistic acting. I will always remember Kemble as the first actor to play Rollo in Pizarro, Richard Brinsley Sheridan's adaptation of a melodrama by August von Kotzebue. Here's a portrait of him in that role: 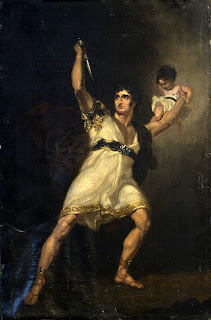 In 1803, Kemble became the manager of the Theatre Royal at Covent Garden. Unfortunately, he never insured the building, and he was nearly ruined when it burned down in 1808. Kemble secured funds to rebuild the theatre. When it was finished, it was more elaborate than before, with beautiful mahogany doors and lush interiors.

Kemble felt he had a right to recoup his expenses. Never mind Covent Garden and Drury Lane had a monopoly on legitimate theatre in London, due to holding royal patents. Never mind also that some of the richest men in the country had given him "loans" that ultimately amounted to free gifts. Kemble had built a grand theatre, and by golly, people were going to pay for it.

The gallery traditionally set aside for the general public was reduced, and Kemble converted space formerly allocated for these cheap seats for luxury private boxes which he rented out for 300 pounds a year. The price for regular box seats went up a shilling. Worst of all, however, Kemble took the price of a basic seat in the pit, which had always been three shillings and sixpence for as long as anyone could remember, and raised it another sixpence to four shillings.

Could average people afford an extra sixpence per seat? Perhaps. But that wasn't the point. Kemble profited from a government patent that granted him and the rival patent holder a virtual monopoly. The construction of the new theatre had amounted to a government bailout, at least in the eyes of many people. Plus, converting part of the gallery into luxury boxes was a deliberate attempt to upscale the theatre. Common people were essentially told that they weren't important anymore. Theatre would now be a luxury for the 1 percent. And to top it all off, the poor souls who occupied the pit, the ones least able to afford it, were being asked to pay nearly 15 percent more for the pleasure of being looked down upon. This was England, and theatregoers were not going to take this outrage lying down.

When Kemble and Siddons appeared in the newly built theatre in their most famous roles, the two leading parts in Macbeth, they were met with jeers, boos, and a very public protest. Though peaceful, these protests became known as the "Old Price Riots" or "OP Riots" for short. Patrons paid the full price of a ticket, but once inside the yelled at Kemble every time he appeared on stage, demanding that he bring back the old prices.

Opponents of the new priced called themselves "OPs," while Kemble's supporters were known as "NPs." There were OP banners, OP chants, OP songs, and even an OP dance. The OPs even pelted the stage with specially made old price tokens like this:

Kemble hired boxers to rough up the protestors, but when his thugs "arrested" Henry Clifford, a prominent lawyer who was a member of the OP faction, it backfired. Kemble was found guilty of false arrest, and public sympathy went more and more to the OPs. Finally, after nearly three months of protests, Kemble publicly apologized and announced a return to the old prices.

The play Kemble's Riot, playing until Saturday at The Players Theatre, dramatizes all of these events. Guy Masterson plays Kemble while Beth Fitzgerald plays Siddons. Matt Baetz and Marla Schutz, however, are the heart of the piece, portraying two rabble rousers, one OP and one NP, who stir up the audience, getting them to chant, sing, and even throw (soft!) objects at the actors on stage.