I recently read The Jealous Wife by George Colman the Elder. Coleman was an eighteenth-century playwright whose son of the same name also wrote plays, hence his title as "the elder." Here's a portrait of him done in the style of Joshua Reynolds, though apparently not by that great artist. 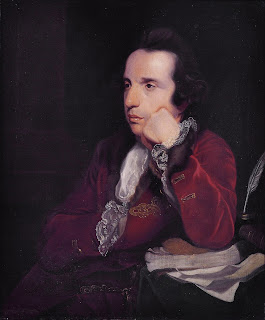 It is perhaps fitting that his portrait should just be "in the style of" a great artist. I think few people would argue that Coleman himself was a great artist, even though he did sometimes capture the style of superior writers.

The Jealous Wife appears to be Coleman's second play, produced in 1761, the year after his first dramatic work, Polly Honeycomb.  Though genuinely funny, The Jealous Wife is reminiscent of Henry Fielding's work, particularly Tom Jones. It also might have benefited from suggestions and cuts made by Coleman's friend, David Garrick. In any case, after the play premiered at Drury Lane, it made Coleman famous.

The first act sets up Mrs. Oakly as the titular jealous wife. She intercepts a letter intended for her husband, at first suspecting that it is a love note from a woman, in spite of the fact that the address is written in a man's handwriting. Mr. Oakly reads the letter and finds out it is a complaint by Henry Russet, whose daughter has eloped. Mrs. Oakly madly claims that he husband has run off with the girl, while the more likely culprit is Charles, an orphaned nephew of Mr. Oakly's. As it turns out, Charles was in love with Miss Russet, but he is innocent of this particular offense. She did not elope with anyone, but rather ran away from her father to avoid a forced marriage to Sir Beagle. (Got all that?) Young Harriet Russet makes the unwise decision to take refuge with her aunt, Lady Freelove. The woman's name alone should have been a hint she was not of good character!

Act II begins with Mrs. Oakly again complaining that her husband must be intriguing to have an affair. She pretends to make up with him, but she becomes enraged whenever she hears anything about Harriet. Mrs. Oakley sends her servant, the unfortunately named Toilet, to let the porter know she will not see anyone for the day. Mr. Oakly comments that she will sit all day feeding on her own suspicions. Exercising her prerogative to change her mind, however, Mrs. Oakly then orders a chariot so she can go out.

The second scene of Act II takes place at the home of Lady Freelove, who has been trying to arrange a match between Harriet and Lord Trinket. When Lady Freelove leaves her niece together with the lord, he tries to force himself upon her, and she is only saved by the timely arrival of Charles, who draws on Lord Trinket. Harriet escapes, but Charles looks bad, having arrived unannounced at Lady Freelove's house and promptly getting into a brawl. The situation is made worse when Mrs. Oakly arrives. Lady Freelove sees that her visitor is a jealous type, and takes advantage of the situation, planting hints that Mr. Oakly is having an affair with the girl, though this is clearly so she can get Charles out of the way.

In the third scene of Act II, we return to Oakly's home, where Harriet has fled, hoping to find some protection from Lord Trinket. Mrs. Oakly returns to find her husband speaking with this beautiful young woman and decides to hide and listen in on their conversation. Unfortunately, she only half-hears what they say. Mr. Oakly tries to arrange for a place for Harriet to stay without being under the same roof as Charles, but to Mrs. Oakly it sounds like he is setting her up to be a kept woman. Mr. Russet arrives, and Harriet collapses into Mr. Oakly's arms. Russet drags his daughter out of the house as the curtain falls.

The first scene of Act II shows Mrs. Oakly in her dressing room giving contradictory orders to the unfortunately named Toilet. Her suspicions of her husband are stronger than ever, and she resolves not to see him for three days. Given how many different things she has claimed she will do, however, the audience knows that this is not going to last.

In the final scene, Russet learns that Sir Beagle has decided he does not want a loveless marriage and has agreed to swap Harriet to Lord Trinket in exchange for a brown horse named Nabob. Mr. Oakly's brother manages to explain the whole mess to Russet, who agrees to allow his daughter to marry Charles. All that remains is for Mr. Oakly to stand up to his wife and cure her of jealousy. Taking his brother's advice, Oakly rails at his wife and cowers her into submission. His patriarchal supremacy reestablished, everything ends happily, and Mrs. Oakly proclaims that she has not merited her husband's kindness.

This play is not exactly a model of feminist enlightenment, but it does have some funny moments, and Mrs. Oakly is a great part for a comic actress, provided she's willing to partake in what is clearly a chauvinistic play. Hannah Pritchard originally played the role acting opposite Garrick, who played Mr. Oakly. In 1855, Charles Kean famously revived the piece with himself as Oakly and the actress Ellen Tree, by that point Mrs. Kean, in the title role.