What Julius Caesar Is Really About

I've now seen The Public Theater's brilliant production of Shakespeare's Julius Caesar twice, and can confirm indubitably that this nuanced and beautiful staging does an excellent job of telling a story that condemns all forms of political violence and calls for unity in the face of dangerous national divisions.

Though I wanted to post about the play earlier, I have refrained from writing about the piece at the request of The Public Theater, which has embargoed all reviews until tonight at 11:00 PM so the show can have a chance to officially open first. This is standard practice in the industry. As to why other outlets have reviewed the show in advance of the embargo, I don't know. You'll have to ask them.

What concerns me most is that some of these reviews seem to be so dishonest as to make me question whether the writers even saw the play at all. Reviewers at certain publications (they know who they are) have confessed to walking out of plays at intermission and still writing reviews. However, this production of Julius Caesar is performed without an intermission, so what is the excuse of Kyle Smith of The National Review?

Smith characterizes the audience of the Delacorte Theater (perhaps one of the most heterogeneous you will find in New York City, or indeed America) as "Chardonnay-sipping professionals in designer eyewear," though I for one don't wear glasses nor drink Chardonnay, and unlike Smith, I actually saw the show.

Why do I suspect he did not? In the next paragraph, he writes that Caesar's first appearance on stage is "to the sound of tacky electric guitars, with screaming hicks going bonkers in their MAKE AMERICA GREAT AGAIN caps and American-flag T-shirts." Um... no. I saw the play twice, and consulted with others who saw it as well. There was not a single red cap in the entire play. (Though flags and other images of Americana do figure prominently.) We do hear cheers, but Smith seems to have hallucinated the caps and T-shirts.

I was looking for those caps, too, since director Oskar Eustis takes the bull by the horns, immediately dealing with the play's contemporary resonance. When the audience walks in, they see crowds milling around onstage looking at famous images from the Women's March and other recent events. As the critic James Shapiro has observed, Shakespeare in 1599 dropped into this Roman play references to an English invasion of Ireland. Similarly, Eustis clearly was thinking about how this story applies to us, right here, right now.

Making the classics accessible and relevant is what The Public Theater does, and they can do it quite well. Remember, these are the same people who gave us Hamilton, a play about the Founding Fathers that is constantly making allusions to our own day. Hamilton won plaudits from across the political spectrum. (Barack Obama quipped the only thing that he and Dick Cheney could both agree on was that Hamilton really rocks.) Alas, conservatives today seem to have forgotten how to appreciate a well-written politically balanced play that deals with complex issues as being... complex.

Let there be no misunderstanding. This production of Julius Caesar does make manifest the obvious parallels between Trump and Caesar. Gregg Henry as Caesar wears a bright wig and red tie that make him unmistakable as the current resident of the Oval Office. While his wife Calpurnia (played by Tina Benko) looks a bit like Ivanka Trump, as soon as she opens her mouth, her East European accent makes her unmistakable as Melania.

Caesar's interactions with her (complete with pussy-grabbing) are not an indication that he can't work with women, though. His right-hand man, Marc Antony, is played by a woman, Elizabeth Marvel. Though her character is not readily identifiable with any particular political figure, Marvel's Southern drawl and folksy pseudo-honesty combined with a meticulous manipulation of the levers of power mark her as a certain type of politician we can all recognize. (Both Republicans and Democrats come to mind.)

So how does an audience in the heart of Blue America respond to the assassination of liberals' favorite punching bag? Here's where the lying Conservative Media gets it wrong. This production ensures we can only react to the assassination with shock and horror. The murder of Caesar is carried out with such brutality and violence that not even the most die-hard lefty will want to cheer on the conspirators. No matter how noble-minded the assassins seemed just moments ago, as Caesar's body lies bleeding and hands are literally washed in blood, the cost of political violence becomes all too clear.

A friend of mine who attended the first preview with me said she felt like vomiting during the scene where the assassins coat their hands in Caesar's blood. The conspirators do this to make a political statement, and exit with cries of liberty. Shakespeare dictated the lines the conspirators say, but it is Eustis who gives us reactions to the assassination. Everyone onstage not a part of the murder looks on with horror, as the audience must as well. This is by design. Having now seen Julius Caesar twice, I cannot imagine how someone being intellectually honest can claim the production is anything less than a full-throated condemnation of violence as a means to effect political change.

Despite the tragedy's title, the play isn't really about Caesar as much as it's about how others respond to him. Eisa Davis as Decius and Teagle F. Bougere as Casca shine brilliantly as usually minor conspirators. Cory Stoll, who appeared memorably in House of Cards, plays Brutus, the most complex of the assassins. As Brutus vacillates, John Douglas Thompson as Cassius revels in his opposition to Caesar, at one point donning a pink knitted pussy hat and running across the stage with a "RESIST" flag.

Brutus and Cassius are great roles, but the pivotal character in the play, particularly in this production, is the crowd itself. It is rare to see professional productions in New York with casts as large as this. The stage of the Delacorte Theater is practically bursting at the seams, and indeed the crowds spill out into the audience. As Brutus and Antony give their funeral orations for Caesar, we see how difficult it is to master the masses, and how once a crowd has shifted, anything can be possible, sometimes disastrously so.

And a disaster is precisely what the assassination of Caesar becomes. The cutthroat Antony allies herself with Octavius (played by Robert Gilbert as a young, privileged playboy) to destroy the remnants of the Roman Republic. The world closes around the conspirators as they meet in a claustrophobic motel room trying to salvage what is left of their resistance. The scene where Brutus and Cassius confront each other before the Battle of Philippi is perhaps the best in the play, and Stoll and Thompson's performance of it is a masterclass in acting.

Yet what happens to all that hard work creating complex, nuanced performances? Before the play even opens, corporate drones pull sponsorships for The Public Theater, presumably without seeing the production. If you actually saw this production and disagree with me, you have a right to disagree. Maybe Smith and the executives at Delta and Bank of America that pulled their sponsorships really did see the show and honestly thought it was incendiary. If so, they are in a very small minority, as not a single person at either of the performances I attended was incited to go out and cause a riot. Quite to the contrary, they left sobered, understanding the importance of working within the apparatus of Democracy even if it is tempting to go outside the rules when those rules don't appear to be working.

So are conservatives attacking the production in spite of its condemnation of violence, or are they attacking it because of its condemnation of violence? After all, it isn't liberals who are going out forming militias. Remember when Jesse Helms made an assassination threat against Bill Clinton? Remember when Donald Trump actively called for a violent revolution should Hillary Clinton win the election, saying "the Second Amendment people" could do something about it if she became President?

But this is the world we live in today. People claiming to be conservatives can openly call for the assassination of their rivals, and there are no consequences, but as soon as a 16th-century play gets staged in a manner that is interesting, complex, and provocative, right-wing zealots who haven't even seen the production start crying foul.

True conservatives like Ronald Reagan and even George W. Bush took repeated drubbings with dignity, and during the early days of our Republic, Federalist politicians were hanged in effigy. How did they handle it? Usually with grace. How did we get to a point where people calling themselves conservatives have such a persecution complex that they immediately condemn plays they haven't seen?

Some video of the assassination scene (which was presumably taken illegally) seems to have gotten the usual suspects riled up, but you cannot judge this production without seeing the whole thing, which you absolutely should do! Go to the website of Shakespeare in the Park right now to find out how to get your free tickets. I think you will find the production masterful.

If you don't, you have every right to tell me I'm wrong. What you don't have a right to do is to condemn a brilliant piece of art you've never even seen. 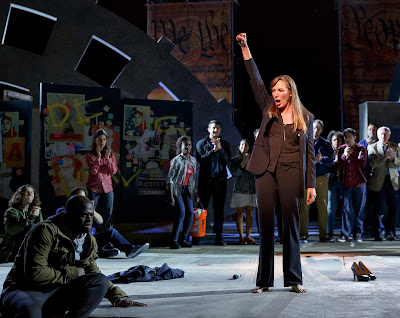 Elizabeth Marvel (center) and the company in The Public Theater’s Free Shakespeare in the Park production of Julius Caesar, directed by Oskar Eustis, running at the Delacorte Theater in Central Park through June 18. Credit: Joan Marcus.