In the Room When It Happened

When I found out that Lin-Manuel Miranda was writing a musical about Alexander Hamilton, I knew I had to see it. Fortunately, it was going to be at The Public Theater, so I clearly would be able to get rush tickets.

Well, I got that one wrong. Instead of rush tickets, the Public had to establish a lottery for the cheap tickets. That was okay, though. I could play the lottery. And I did. A lot. Unfortunately, no matter how many times I went, I never won. 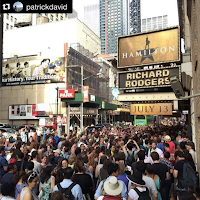 But that was okay, because Hamilton transferred to Broadway, and the producers announced there would be $10 lottery tickets (a Hamilton for a Hamilton) available on Broadway, too. This time, however, I was smart. I would go the very first day of previews. No one would have gotten word yet, and my chances of winning would be pretty good.

So I showed up for the first preview. As did hundreds of others. Someone tweeted a picture of that first day, and if you look very closely, way over to the right you can see me, hoping against hope that my name would be called. It wasn't called that day. Nor the next day. Nor the next. Nor the next. 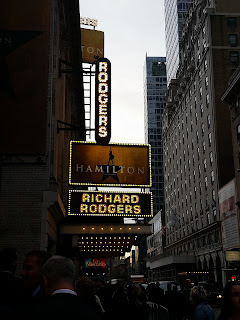 All summer long, when I wasn't in Cape Cod for Moby-Dick, I was putting my name in for the Hamilton lottery. Nothing. Nada. The summer ended. When I could, I still tried to play the lottery, but after all the amazing review, all the amazing buzz, getting to see Hamilton for a Hamilton became nearly impossible, and ticket prices were, well... Broadway.

But then I heard that President Obama, who had already seen the show once, was coming back for a special presentation of Hamilton as a Democratic Party fundraiser. Well, I've always supported the Democrats, and even worked on a few campaigns, handling phones for Clinton-Gore before I was even old enough to vote, and knocking on doors in New Hampshire for Howard Dean. Here was an opportunity to support a cause for which I believed, and finally see Hamilton at the same time.

So I did it. I paid... well, a lot. But it went to the Democrats, and I finally got to see Hamilton, and the President, to boot. My beloved "Spouse A" went to Obama's high school (a bit after he graduated), so she accompanied me and got to see a fellow Punahou alum... from a distance. We were in the next to last row, but the view was surprisingly good. The show was amazing, and the President was in rare form. He noted that both he and Dick Cheney loved Hamilton, and perhaps the only thing the two agreed on was that Hamilton was a great show. Marci snapped this picture: 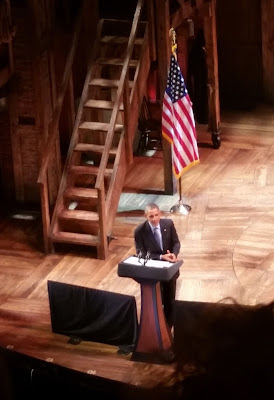 So now I never have to play the lottery again, right? Well, no, because now I want to see it again!
Posted by James Armstrong, Playwright at 7:26 PM