"Garrick was, perhaps, the first of the great English actors to reveal something of a modern attitude to publicity, especially favoring portraits, which could be reproduced in the form of cheaply-priced engravings," writes Roger Manvell, toward the beginning of his biography of Sarah Siddons. 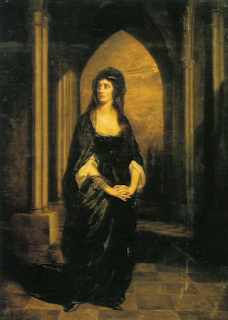 Siddons, however, far exceeded Garrick in her use of the portrait--and even more importantly, the engraving--to help secure and maintain her celebrity status. While still acting in Bath, Siddons had herself painted as an allegorical figure for Melancholy. The artist issued a mezzotint of the painting the day after Siddons made her celebrated return to the London stage in 1782.

Other engravings followed, including copies of William Hamilton's painting of Siddons as Isabella from The Fatal Marriage, together with her own son, Henry. Hamilton never sold his gigantic portrait of Siddons as Euphrasia from The Grecian Daughter, but he certainly sold plenty of prints.

The most famous image of Siddons is as the Tragic Muse, a portrait painted by the great Sir Joshua Reynolds. Most people couldn't afford the 1,000 guinea price Reynolds placed on the portrait, but they could buy smaller engravings, one of which ended up on a special screen decorated by Lord Byron.

Perhaps unsurprisingly for an actress used to fashioning her own image, Siddons eventually took up sculpture. She modeled busts of herself, one of which is now in the Victoria and Albert Museum in London. According to an anecdote related by Manvell:

"Sarah also visited Birmingham, where an eager shopkeeper sold her a stucco bust of herself without realizing who she was. He told her it was 'the likeness of the greatest and most beautiful actress in the world'. She thought its appearance appalling; she began studying statuary far more carefully, and took her own modelling in clay more seriously."

So if you think Madonna or Angela Jolie are good at self-promotion, remember Sarah Siddons was way ahead of them both.