Before criticizing the works of Arthur Murphy, we should first remember what he wrote in the preface to his collected plays: "A bad critic is generally a bad man: he is out of humour himself, and he wants to communicate his rancour to others."

Murphy's play The Grecian Daughter might seem old-fashioned to us today, but we are surely out of "humour" if we let loose our "rancour" upon this jewel of a play. Murphy was already known for his adaptation of The Orphan of China as well as farces like The Apprentice and The Citizen when The Grecian Daughter premiered at Drury Lane on January 23, 1772. At the time, the theatre was being run by David Garrick, a man Murphy both admired and found incredibly difficult as a collaborator.

The play focuses on Evander, the deposed King of Syracuse, and his titular Greek daughter, Euphrasia. In the original production, these two were actually played by a husband and wife team, Spangler and Ann Barry. Euphrasia is suitably feminine, but no blushing flower. When her ally Melanthon says that there is nothing to do but despair, Euphrasia answers:

Yet why despair?
Is that the tribute to a father due?
Blood is his due, Melanthon; yes, the blood,
The vile, black blood, that fills the tyrant's veins
Would graceful look upon my dagger's point.
Come, vengeance, come, shake off this feeble sex,

Murphy opens his second act with "A wild romantic Scene amidst overhanging Rocks; a Cavern on one Side." It is in this secret cavern that the tyrant Dionysius has imprisoned the rightful king, forbidding anyone from bringing him food or drink. Euphrasia begs to be admitted, and after much delay, the guards relent and allow her inside. Philotas, who had previously urged submission to the tyrant, then relates what he saw the faithful daughter do:

Wonder-working virtue!
The father foster'd at his daughter's breast!
O! filial piety!---The milk design'd
For her own offspring, on the parent's lip
Allays the parching fever. 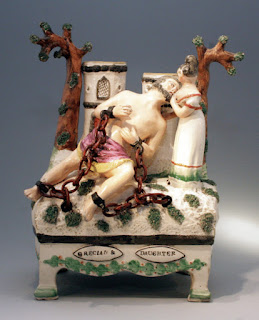 Though this event took place offstage, it clearly left an impression on audiences. A Staffordshire pottery maker chose this scene to represent The Grecian Daughter in ceramic. Such miniatures were common among theatre fans in the eighteenth and early nineteenth centuries. The figure pictured to the right dates from somewhere between 1820 and 1830. That was long after Ann Barry had originated the role of Euphrasia, but it had later been taken up by such notable actresses as Sarah Siddons and Eliza O'Neill. (Fanny Kemble first played the role in 1830, and some people believe it might have been her appearance that inspired this miniature.)

The third act of the play begins on a rampart near the harbor as the Greek general Timoleon comes to deliver Syracuse from the rule of Dionysius. Timoleon really did invade Sicily in 344 B.C., by the way, though his main target was the tyrant Hicetas, as Dionysius only controlled the small island of Ortygia, which formed the center of the city of Syracuse. The historical Dionysius subsequently went into exile in Corinth, though the play (as we shall see) departs from this history.

Murphy has Euphrasia secrete her father in her mother's tomb. In the fourth act, Dionysius plans to slaughter the Greek armies during a supposed truce to bury their dead. He also promises Euphrasia he will kill Evander before her very eyes. Dionysius, of course, doesn't know the old man has already been hidden in his wife's tomb. Euphrasia goes to him in her mother's monument, allowing her to recite this set-piece of gothic terror:

All hail ye caves of horror!---In this gloom
Divine content can dwell, the heartfelt tear,
Which, as it falls, a father's trembling hand
Will catch, and wipe the sorrows from my eye.
Thou Pow'r supreme! whose all-pervading mind
Guides this great frame of things; who now behold'st me,
Who in that cave of death art full as perfect
As in the gorgeous palace, now, while night
Broods o'er the world, I'll to thy sacred shrine,
And supplicate thy mercies to my father.

Here, as elsewhere in the play, Murphy seems to be invoking feelings of the sublime as theorized by Edmund Burke. The most sublime scene, however, comes at the end, when in "one glorious effort" Euphrasia draws a dagger, and strikes Dionysius, crying:

Notice that Euphrasia strikes "first" to defend her father, rather than waiting until her father is stabbed or she herself is threatened. Dionysius complains that he is struck "by a woman's hand" and dies. Engravers memorialized this scene in numerous prints, such as this one to the right of Sarah Siddons as Euphrasia.

Garrick recounted the spectacular ending in an epilogue he wrote:

A father rais'd from death! a nation sav'd!
A tyrant's crimes by female spirit brav'd!
That tyrant stabb'd, and by her nerveless arm,
While Virtue's spell surrounding guards could charm!

Euphrasia's charm cast a spell over the audience for many generations, leading Murphy's play to be a hit well into the nineteenth century. Around 1820, John Smyth printed in Belfast an anonymous broadside retelling the story of the play and illustrating the offstage breast-feeding scene. Over the top? Perhaps. But then again, that was sort of the point. 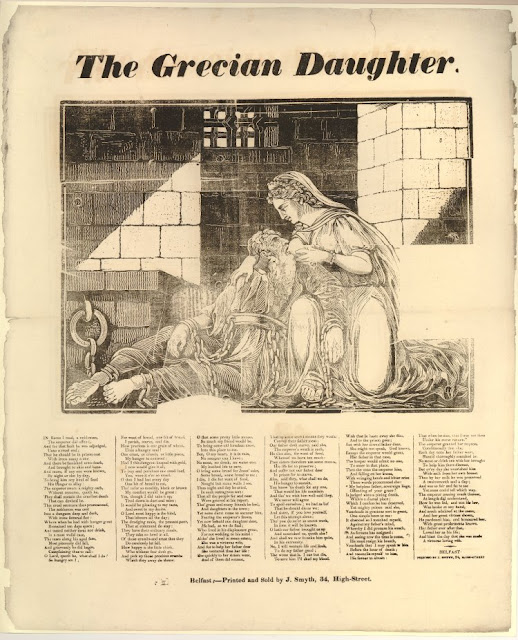