Did you hear the latest from Bath? OMG!

It's that hottie, Elizabeth Ann Linley, again. First of all, can you believe her father? Thomas Linley should be ashamed of himself, trying to marry off his daughter to old Walter Long just to get his money. Can you imagine? Betsy just a teenager, and Walter about 60?

Yes, yes, that Betsy. The prettiest musician in all of Bath. Remember how when she was a girl she used to stand outside the Pump Room and sell tickets for her dad's concerts? Of course now, more people want to hear her stunning soprano voice rather than listen to her father's boring old concerts. And I must say, she really blossomed, didn't she? Here's that portrait Tommy Gainsborough did of her and her little sister Mary. 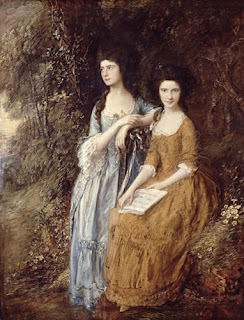 That's her on the left playing hard-to-get, while Mary just stares right at the painter. They say Mary's voice isn't bad, either, but it's Betsy all the boys have been after. Especially that young Irishman, Richard Brinsley Sheridan. Old Man Linley didn't approve of the match. Not just because Richie was Irish, and penniless, but come on! He's a PLAYWRIGHT! What man in his right mind would let his daughter marry a playwright? They say Old Man Linley arranged the marriage to Walter Long just to keep Betsy from going into the theatre. (And to get his hands on his money, of course.)

Well you know what happened next, don't you? Apparently Betsy told Walter she would never be happy as his wife, and that she was in love with the Irish boy, Richard. Well, Walter broke off the engagement after hearing that. I mean, he really liked Betsy, maybe was even in love with her, and he didn't want her to be unhappy. Old Linley had a fit! He threatened to sue for breach of promise, so Walter paid him three thousand pounds to get him to drop the suit. (Well, that's what someone told me, anyway. If anyone asks, you didn't hear it from me.)

And here's the part that makes me think Walter really did love her. You know all of those jewels and other gifts he gave her during the engagement? He told Betsy to keep them. I mean, what was he going to do with them anyway? But still, that was really nice of him, as it really wasn't his fault things didn't work out. Personally, I blame Old Man Linley, not that anyone asked my opinion.

But then, can you believe it, the Haymarket Theatre opened a play all about the whole affair! Samuel Foote (who I never liked anyway) wrote this comedy called The Maid of Bath in which he himself played a filthy old goat with lots of money who gets engaged to the prettiest girl in Bath. Well everyone knew who it was about! They say Walter threatened to knock his lights out if Sammy went ahead with the play, but he did, and Walter even sued, but I mean, come on, it's Foote! He gets sued for libel like every other week, so he didn't care.

You would think after all that Old Man Linley would just let Betsy marry Richard like she wanted to, but no! So what happened? Betsy eloped with her boyfriend--to France! They got married in Calais, and I hear the ceremony was lovely, but the marriage wasn't valid in England, because Betsy was only 17 and underage (so was he, for that matter, being only 20 himself), so without her father's permission it wasn't legal. Eventually, both their fathers gave in and granted consent, because really, it was kind of a done deal by that point. And my goodness, do you know what happened that summer--Richard Sheridan got challenged to a duel!

It was that awful soldier, Captain Thomas Mathews. Captain Mathews obviously wasn't much of a soldier, because they had hardly started fighting when he dropped his sword and had to beg for his life. Richard demanded that the good captain sign a retraction of all the nasty things he had said, which he did, but then a little while later he started being a jerk again and challenged Rich to a second duel!

No one could have blamed Richard if he had just ignored this moron, as he'd already won the first duel fair and square, but this time it was personal. They were fighting so hard, both of their swords broke, and they started pummeling each other with just the hilts. They were both lucky to have survived if you ask me. Anyway, after that, Captain Mathews didn't challenge Richard Sheridan to any more duels, believe you me.

Oh, and now that they're married, did you see the new portrait Tommy Gainsborough did of MRS. Sheridan? Here it is: 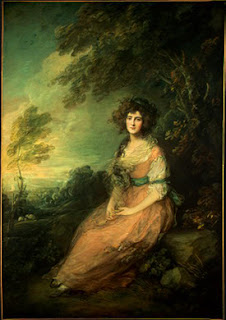 And speaking of duels, you simply MUST see Richard's new play The Rivals. There's this whole dueling scene at the end which is just hysterical. Not that it has anything to do with real life, of course.

I could tell you more about the happy couple (well, unhappy couple more recently), but you know me. I never gossip.