The Rise of the English Actress

I just finished reading Sandra Richards's book The Rise of the English Actress. By its nature, the book is a rather general study, but it gives a wonderful history of women on the British stage.

Women appeared on stage during the middle ages, but by the Renaissance they were official banned from taking part in the public performances of plays in England. There were some exceptions, such as the infamous "Moll Cutpurse" who acted illegally, and the French actresses who were hissed at the Blackfriars Theatre in 1629.

It wasn't until the Restoration that actresses became the norm in England, and they quickly became an attractive novelty. Richards points out that in 1664 Thomas Killigrew staged an all-female performance of his play The Parson's Wedding. All-female casts were still being used a decade later when John Dryden's Secret Love was revived with only women on the stage.

By the early eighteenth century actresses were using playwrights to pen works especially for them. Richards cites Henry Fielding's Deborah and The Intriguing Chambermaid, written for Kitty Clive, and Colley Cibber's The Careless Husband and The Provok'd Husband, both vehicles for Anne Oldfield. Such collaborations did not always go well, though. Samuel Jonson blamed the failure of his play Irene on a sub-standard performance by Hannah Pritchard. 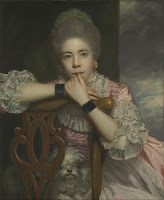 Perhaps the most celebrated eighteenth-century role created for a specific actress was Lady Teazle in Richard Brinsley Sheridan's The School for Scandal. According to Richards, Sheridan wrote the part especially for Frances Abington. It was Abington who made the mob cap fashionable after she wore it on stage in James Townley's two-act farce High Life Below Stairs. The role she played, Kitty, was originally played by Kitty Clive, but Abington used it to create a fashion sensation that came to be known as the Abington Cap.

Women were instrumental in the creation of the benefit performance, and their earnings could top those of male actors. Richards notes that in 1792 the top-grossing benefit night belonged to Dora Jordan. That year, Jordan earned 540 pounds, while the tragic actress Sarah Siddons earned 490 pounds, and the leading male actor, John Philip Kemble, earned only 480 pounds. The Jordan-Siddons rivalry mirrored a debate over whether comedy or tragedy was the superior genre. The Dramatic Magazine in 1788 sided with Jordan, declaring she "fairly beat Melpomene out of the field." 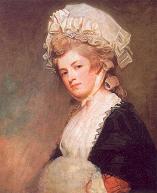 The late eighteenth century also saw the remarkable career of Mary Robinson, the actress who in 1775 began publishing her poems under the patronage of the Duchess of Devonshire. Unfortunately, her 1794 play Nobody struck a nerve, and was hissed off the stage when it exposed the gambling habits of a number of prominent society ladies. Robinson allegedly dictated her poem "The Maniac" while under the influence of opium. As one might expect, Samuel Taylor Coleridge saw a kindred spirit in her and in 1800 declared Robinson "a woman of undoubted genius."

Robinson was famously painted by the major artists of the day, and as Richards puts it, it was in the eighteenth century that actresses "now became a means of establishing a painter's reputation when they allowed themselves to be portrayed." Portraits of actresses "were offered to the market by painters satisfying a public demand, and reflected how audiences saw female players." Richards specifically cites Thomas Lawrence, whose 1790 portrait of Elizabeth Farren catapulted the painter into fame and royal favor. 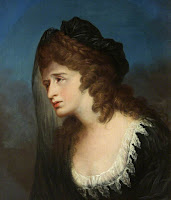 The great tragic actress of the late eighteenth century was of course Sarah Siddons, and Richards devotes an entire chapter to her. Drawing on Siddons's biography by Thomas Campbell, Richards points out that Siddons strove to be "natural" but by "natural" she meant credible for the character, rather than what we today might consider naturalistic. Siddons famously studied Egyptian and Greek sculpture, using it to help her achieve the exact poise and muscle tension she wanted to have.

In spite of her generally acknowledged superiority over her brother, John Philip Kemble, Siddons could not always enjoy her stardom. While Kemble was given a public dinner at the occasion of his farewell performance, Siddons received no such honor. She remarked to Samuel Rogers, "Well, perhaps in the next world women will be more valued than they are in this." Still, she left her mark on plays, and Richards notes that "Siddons's personality and bearing unquestionably informed and determined the role" of Jane de Monfort in Joanna Baillie's play De Monfort, which premiered in 1800.

Eliza O'Neill succeeded Siddons as the great British tragedienne of the early nineteenth century. O'Neill retired from the stage in 1819, though, and in the early Victorian period actresses like Helen Faucit and Siddons's niece Fanny Kemble took the reins. In 1837, Fanny Kemble wrote An English Tragedy, but William Charles Macready refused to stage the play, in spite of recognizing that it was "full of power, poetry and pathos." 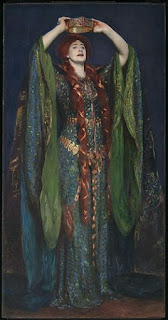 The most famous Victorian actress was Ellen Terry, and Richards gives Terry her own chapter. Terry was most renowned for playing Lady Macbeth, wearing "a gown of soft green silk and blue tinsel edged with rubies and diamonds, draped by a heather velvet cape and decorated with flaming griffins and real beetle wings of green to achieve a metallic dazzle.” John Singer Sargent painted a portrait of Terry wearing the dress, helping it to become, in Richards's words, "the most famous costume in stage history."

Sybil Thorndike was one of the great British actresses of the early twentieth century. Richards considers her production of Percy Shelley's The Cenci in 1922 to be one of the most important of the actress's career. According to Richards, "Sybil's Beatrice established her firmly as a great tragic actress and Shelley as a great dramatist." At the time, George Bernard Shaw was trying to determine who should play the title character in his new play Saint Joan. After seeing Thorndike as Beatrice Cenci, Shaw informed his wife, "I have found my Joan." Thorndike later became closely associated with the role of Joan of Arc, which she did indeed originate in Shaw's play.

Richards continues the story of the English actress past Thorndike, writing for instance about Peggy Ashcroft, who played Desdemona opposite Paul Robeson in Othello. She goes right up to the present, discussing Harriet Walter, who I just saw play Prospero in an all-female production of The Tempest. All in all, this is a wonderful book for anyone interested in the history of British acting.
Posted by James Armstrong, Playwright at 8:25 PM