"Nothing has been so much an object of man's curiosity as man himself." Thus wrote Joanna Baillie in the preface to her first volume of the Plays on the Passions published in 1798.

It's that remarkable woman's birthday today. She came into the world on September 11, 1762, one of two premature twins, the other of whom soon died. Her older siblings, Agnes and Matthew, seemed the remarkable ones. Matthew in particular excelled at his studies, while young Joanna was more interested in horses than her books.

When her father died, the family moved into the home of her uncle, William Hunter, a London doctor who kept an estate in Scotland but rarely visited it. Matthew went to college in Glasgow and then Oxford while the girls stayed at home with their mother. When Uncle William died, however, the Scottish estate passed to his younger brother, and the family moved to London, staying with Matthew, who was now a promising young physician.

The girls never lost touch with their Scottish roots, though. As one of Baillie's biographers puts it: "Agnes and Joanna never attempted to sophisticate their vowels or compromise with their r's." They were hardly social outcasts in London, and one of Joanna's acquaintances was Mary Berry, a writer and close friend of Horace Walpole. In 1798, the now married Matthew bought a new house in a more fashionable part of town, and his mother and sisters moved out to Hampstead, then a "country" area just outside of London. 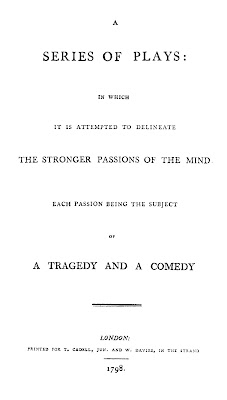 It was in that year that Baillie's first plays were published. As she wrote in her preface, she wanted to satisfy the "universal desire in the human mind to behold man in every situation, putting forth his strength against the current of adversity." The idea was to show people in the thrall of intense passions--passions so violent no one would wish to feel them in themselves--but these passions could be instructive when seen in others. As Baillie put it, no one wants to see a ghost, but we love watching those who believe in ghosts struck by the terror of their imaginations.

"There is, perhaps, no employment which the human mind will with so much avidity pursue, as the discovery of concealed passion," Baillie wrote. Thus, she proposed writing two plays, a tragedy and a comedy, on each of the major passions. She belittled the Gothic style then in vogue, but admitted that it did sometimes strike upon moments of truth, and she wanted to convey those natural truths about emotion in a more refined manner. Her plays, she said, would be studies in human nature, and would instruct the audience on how they might behave when moved by similar passions.

Most people assumed the author of the Plays on the Passions was a man, but the literary patron Hester Piozzi could not be fooled. She saw that Baillie was writing parts for older women who had psychological sophistication, whereas most male authors didn't seem to care for heroines once they passed the first bloom of youth. In 1800, Baillie's identity was revealed, and that same year her play De Monfort premiered at the Theatre Royal Drury Lane with John Kemble and Sarah Siddons in the leading roles.

Though the production was not as successful as the theatre had hoped, Baillie continued to enjoy a reputation as being the finest British dramatist alive. She met Walter Scott, who had written some of his own plays, but said that after reading Baillie's works he had decided to abandon the drama, feeling himself incapable of ever writing a tragedy as fine as one of hers. Scott wrote to her in 1808: "I may say this with confidence, because it is the simple truth, that there breathes not a person whose opinion I hold in equal reverence."

Baillie's plays have fallen out of fashion, though the Red Bull Theatre did recently perform a staged reading of De Monfort. Scholars are beginning to rediscover her work, and perhaps one day audiences will, too.
Posted by James Armstrong, Playwright at 9:33 AM