When the Society for Theatre Research published my article on Eliza O'Neill in Theatre Notebook I was very grateful to the British Museum for allowing me to use an image from their collection sans royalties.

Their policy made sense. Theatre Notebook is a non-profit journal with a very limited circulation. The image I wanted to reproduce was a cartoon created in the early nineteenth century, so it had long been in the public domain. True, the British Museum had gone to the trouble of photographing it and placing an electronic file in their database, but they are a public institution with taxpayer support.

I was disappointed, however, when I wanted to reproduce some other images from the British Museum in the journal SHAW. It seems the museum's policy has changed. I can't blame them. I'm sure the British Museum has been facing budget cuts from a Tory government intent on a policy of austerity. The museum must be having to look for every crumb of funding they can get now, so they probably had little choice but to monetize their online collection.

As I am not a British taxpayer, I have no right to complain. If the British people want to starve their public institutions, that's their own affair, and as a citizen of a republic that has just elected the least qualified chief magistrate in its history, I certainly should not be throwing stones. Still, it saddens me greatly that the British Museum has been forced into being so parsimonious. We are talking about images in the public domain. The only thing still under copyright is the photograph of the image, not the image itself.

Well, I paid the British Museum (or rather the contractor they hired) for the rights to the images I couldn't get anywhere else. There was one, however, that I was able to secure the rights to permanently. The image in question is of John Singer Sargent's famous painting of Ellen Terry as Lady Macbeth. The opening stage directions of G.B. Shaw's The Philanderer mentions "theatrical engravings and photographs" of various actors, including Terry. This was one of the images I definitely wanted to include in the article.

Since I wanted to illustrate Shaw's stage directions, I needed an engraving of Sargent's painting, not an image of the painting itself (which is owned by the Tate Gallery in London). The British Museum has such an engraving in their collection, but surely many such engravings exist. Couldn't I find one elsewhere? Well, not at the National Portrait Gallery (though they had an image of John Kemble I needed), and not at the New York Public Library (though I've used their images in the past).

After a search online, I discovered a print dealer selling an actual engraving of the painting for less than the British Museum wanted for the rights to reproduce the image in the journal. To be fair, the price was comparable--the same amount in dollars as the museum wanted in pounds, and I also had to pay for shipping. Still, by purchasing the engraving and scanning the image myself, I secured the rights to use it whenever I wanted.

So in the spirit of Christmas Eve, I am offering this image to anyone who wants it, to publish it in any journal, book, newspaper, or magazine they choose. I didn't paint it--that was Sargent. I didn't engrave it--that was C. Carter. The only value I added was making a digital image of the piece. You can have that for free.

If you want a higher quality image, feel free to contact me. You can credit it to the personal collection of James Armstrong. Enjoy! 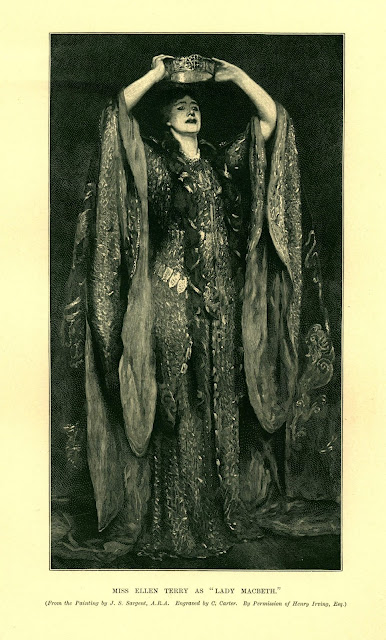