I have a long-standing interest in the Regency-era actor Eliza O'Neill, so I must thank Mari Lyn Henry, founder of the Society for the Preservation of Theatrical History, for pointing me in the direction of a source about her life I hadn't before encountered. 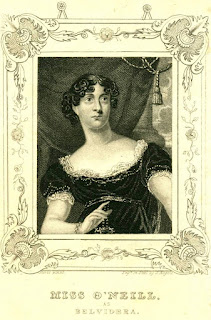 Charles E.L. Wingate wrote a book in the 1890s called Shakespeare's Heroines on the Stage. He goes over a number of women who played Juliet before reaching "the elegant Miss O'Neill" whom he calls "a Juliet of high rank." Wingate comments on O'Neill's physical attractiveness, which he refers to as her "external advantages," but maintains that they were "merely the mediums through which her internal powers displayed their brilliancy."

Wingate goes on to tell the story of how O'Neill got her big break in Dublin when "the leading actress of the city" refused to go on unless she received more pay. Oxberry's Dramatic Biography identifies this woman as Miss Walstein, sometimes referred to as the Hibernian Siddons, due to the resemblance of her acting to that of the famed Sarah Siddons. O'Neill and Walstein remained twin stars in Dublin for a while, with O'Neill playing Shakespeare's Juliet, Nicholas Rowe's Jane Shore, and Ellen in an adaptation of Walter Scott's The Lady of the Lake. Meanwhile, Walstein played Blanche in The Lady of the Lake as well as such roles as Lady Teazle in Richard Brinsley Sheridan's The School for Scandal.

John Philip Kemble, the little brother of Sarah Siddons, discovered O'Neill in Dublin and brought her to London, where she awed the crowds at Covent Garden. Eventually, O'Neill married and retired from the stage, but Wingate includes a touching anecdote about her meeting Kemble later in life. As he tells it:

Long after she had left the stage she met one day, in a private parlor, the Romeo with whom, 50 years before, she had loved and died. At the quick cry of the white-haired Kemble of seventy-five, “Ah, dear Juliet,” the lady of the Capulets again embraced her Romeo of old with touching, half-real, half-dramatic tenderness, reminiscent of those earlier days.

What a lovely story! Oxberry's doesn't include that tidbit, but it does confirm something else Wingate writes, that upon her marriage she left the entirety of her savings to her family. Wingate estimates that amount at 20,000 pounds, quite a sum for an actor of the day, but one clearly deserved by "a Juliet of high rank."
Posted by James Armstrong, Playwright at 7:44 AM