A Clown for All Seasons

Joseph Grimaldi was one of the great clowns of the early nineteenth century. His life story would have been fascinating no matter who recorded it. As luck would have it, though, his memoirs were put together by the greatest English writer of his day: Charles Dickens. 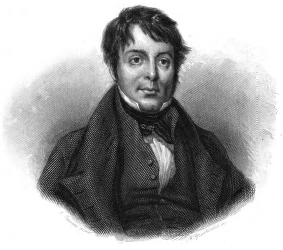 In 1838, the publisher Richard Bentley came out with two volumes of Memoirs of Joseph Grimaldi that had been "Edited by 'Boz'," with the Boz in question being none other than Dickens. The cover page is perhaps misleading, since "Boz" had already "edited" The Pickwick Papers and was currently at work "editing" both Oliver Twist and Nicholas Nickleby. In those cases, "edited" meant wrote from scratch. However, Grimaldi did leave a manuscript behind recalling his life story, so in this case, Dickens actually did just edit it (though he took a strong hand in the job).

A "clown" in Grimaldi's day was one of a number of stock characters on the British stage derived from commedia dell'arte, including "Harlequins, Pantaloons, and Columbines," as Dickens notes in his introductory chapter. These characters appeared together in the elaborate shows known as pantomimes that were staged every year around Christmas, often lasting until Easter. As a boy, Dickens had loved these shows, which is why when he was given a chance to edit Grimaldi's memoirs, he was "in a perfect fever" to undertake the job. Changing Grimaldi's first-person narrative into a third-person biography, Dickens was able to utilize the actor's personal recollections while combining them with his own writing style.

According to the account in the Memoirs, Grimaldi's father was a native of Genoa who became both a dentist and a dancing master in England, as well as playing the role of clown himself. His son, young Joe Grimaldi, was born in 1779, the same year the famous actor David Garrick had died. He made his debut on the stage of the Theatre Royal, Drury Lane at the age of one year and eleven months. He also began to perform at Sadler's Wells in 1783, appearing in the "arduous character of a monkey." He would frequently appear onstage with his father, and on one occasion, his father was so angered, he beat the boy in earnest right in front of the audience. As the memoir relates, "This was all taken by the audience as a most capital joke; shouts of laughter and peals of applause shook the house." 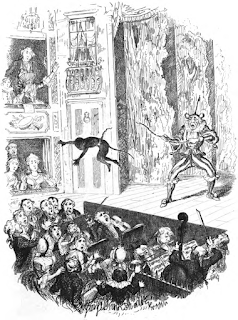 The artist George Cruikshank provided illustrations for the Memoirs. One of these shows a famous incident where Joe was playing a monkey and his father was supposed to swing him around by a chain. According to the story: "One evening, when this feat was in the act of performance, the chain broke, and he was hurled a considerable distance into the pit, fortunately without sustaining the slightest injury; for he was flung by a miracle into the very arms of an old gentleman who was sitting gazing at the stage with intense interest."

Grimaldi's father died in 1788 and was buried in the churchyard of Exmouth Street Chapel. While he provided handsomely for his two children, the executor of his will, Joseph Hopwood, invested all of the family's money in his own business and subsequently went bankrupt. The family was left destitute, and it was up to young Joey to support the family as a child actor. The following year, his younger brother set sail as a cabin boy on a ship and disappeared.

As a teenager, Joey fell in love with Maria Hughes, who also happened to be the daughter of his employer at Sadler's Wells. On the very day that Grimaldi delivered his first love letter to her, there was a tremendous accident at the theatre, and a heavy platform fell on him, injuring his shoulder. The next day, Maria rushed to his bedside, much to the delight of Joey. Eventually, he obtained the consent of her parents, and the two were married at St. George's in Hanover Square.

In 1799, things couldn't have been going better for Grimaldi. He had a successful career, a wife he adored, and what was more, the couple was expecting a child. Unfortunately, it was not an easy pregnancy, and after many difficulties, Maria died, leaving Joey with neither child nor wife. Maria's body was buried in the Hughes family vault at St. James's Church, Clerkenwell. Two months later, the Christmas season demanded another pantomime, and Grimaldi had to once again go onstage and play the clown.

Eventually, Joey did remarry. After he injured his foot onstage, a certain actress identified in the Memoirs as "Miss Bristow" tended him in his illness, and the two ultimately wed, spending more than thirty years together before the lady died. This was Mary Bristow, who married Grimaldi on Christmas Eve, 1801, and within a year bore him a son, Joseph Samuel, known as J.S. In 1803, Grimaldi's family life was momentarily turned upside down when his brother mysteriously returned from a life at sea, though Joey had long given him up for dead. Strangely, however, the brother appeared for only one evening, and then vanished again forever.

During the early part of his career, Grimaldi performed at Drury Lane, as well as minor theatres like Sadler's Wells. In 1806, however, he gave up Drury Lane to appear at the rival patent house at Covent Garden. His first appearance at that theatre was not as a clown, but as Orson in the Romantic melodrama Valentine and Orson by Thomas Dibdin. Grimaldi frequently appeared in melodramas and other entertainments as well as pantomimes, though it was always as a clown that he was best remembered.

Two years after he joined the Covent Garden company, the theatre burned down, and the company had to perform in smaller venues until it could be rebuilt. When the new building opened in 1809, its manager (John Kemble) tried to raise ticket prices, which had remained fixed by tradition for many years. The result was a massive protest known as the O.P. Riots. The Memoirs describe the disturbances as "the great O.P. Row" and note that "noises made by the audience utterly overwhelmed every attempt that the actors could make to render themselves audible." A few audience members even "brought live pigs, which were pinched at the proper times, and added considerably to the effect of the performances."

Given the impossibility of performing dialogue in such an environment, Kemble asked Grimaldi to perform in a pantomime version of Don Juan. Grimaldi took the role of Scaramouch, as he typically did in Don Juan, and the first night he performed the piece, there was great applause when he entered and very little disturbance afterward. Kemble thought he had finally found a way to win over the audience, and asked Grimaldi to play the same role the next night. However, on the second night of Don Juan, the disturbances recommenced, and they did not let up until Kemble agreed to lower the prices.

In 1812, Joey was invited to dine with nobility at Berkeley Castle, and it was there that he first met Lord Byron, who had usually patronized Grimaldi's benefit performances at Covent Garden. Byron praised the famous clown in such lofty terms, that at first he thought the lord was being facetious. Later, Byron gave Grimaldi an engraved snuff box, which the actor cherished for the rest of his life.

Joey's son was getting older now, and eventually the elder Grimaldi took on the role of Don Juan while J.S. played Scaramouch. In 1823 Joey's health took a turn for the worse, and he was forced to stop performing. J.S. became the company's principle clown, which greatly pleased his father. Unfortunately, upon finding success, J.S. "abandoned himself to every species of wild debauchery and riot," according to the Memoirs.

After years of hard living, J.S. died. The coroner said that "his body was covered with a fearful inflammation" and he had been found in "furious madness, rising from his bed and dressing himself in stage costume to act snatches of the parts to which he had been most accustomed." Two years later, Grimaldi's wife Mary died as well.

The concluding chapter Dickens provided for the Memoirs recounts how Grimaldi himself passed away on May 31st, 1837. The cause of death was apparently natural, and the coroner's jury declared that he "had died by the visitation of God." He was buried at St. James's Chapel on Pentonville Hill. The graveyard where his body was laid to rest is now a public space known as Grimaldi Park. 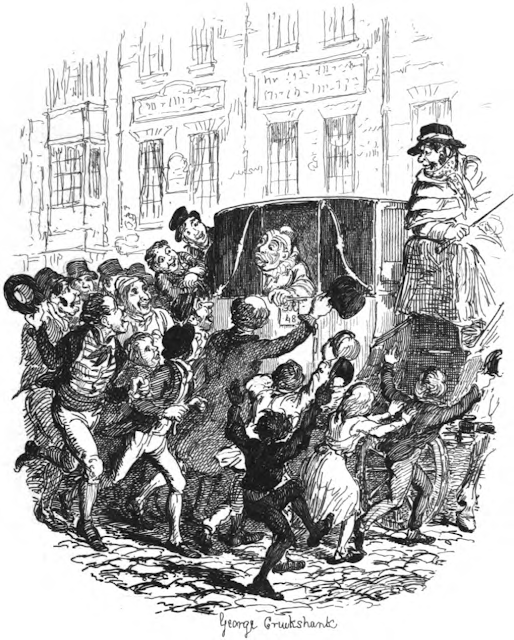