Earlier this year, the Theatre Royal Drury Lane shut down for renovations, including making all levels accessible by elevator.

That wasn't what it was like when I first went there. Since I'd bought a ticket way up in the cheap seats, I couldn't even enter through the lobby. Instead, I had to go around the corner to the side entrance--the one that had been built for servants during the 19th century--and walk up seemingly endless rows of stairs. And, personally, I wouldn't have had it any other way.

Don't get me wrong. It's important that we make theatres accessible for everyone. I'm just glad I had a chance to see Drury Lane the old-fashioned way, the way servants and other working-class folks saw it during the Regency period when the building first opened in London. The building that's there now goes back to 1812, though it's legacy goes back even farther.

During the Restoration, Thomas Killigrew got a patent from King Charles II to set up a theatre troupe known as the King's Company. At first, they just performed in a tennis court, as was sometimes done in France at that time, but in 1663 Killigrew opened a theatre on Bridges Street near Drury Lane. The flat area near the stage, what we today would call the orchestra, was known as the pit, and around it were boxes for wealthier patrons.

Originally, the pit was uncovered, but later the management added a glazed dome to (try to) keep out the rain. Unlike audience members in the pit of Shakespeare's Globe who stood, the audiences in the pit of Killigrew's theatre sat on backless benches. Even upper-class men would sit there to get a better view of the action. Respectable ladies, on the other hand, tended to stay in their boxes, as they didn't want to be mistaken for the infamous "orange girls" who sold refreshments (and sometimes other things) to audience members.

The rival Duke's Company had set up a magnificent theatre in a former tennis court located at Lincoln's Inn Fields. It included elaborate stage machinery hidden by a proscenium arch. Not to be outdone, Killigrew's theatre contained a proscenium and shutter-and-groove system for changing scenery. Actors weren't used to this setup, though, and continued to perform on the large apron in front of the proscenium. It was on this stage that Nell Gwyn began her career and attracted the attentions of the king himself. Unfortunately, the building was destroyed by fire in 1672. 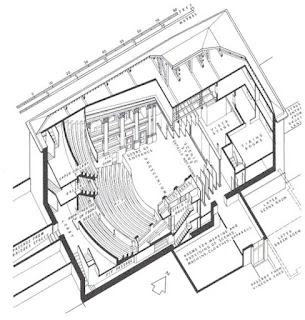 A replacement opened in 1674 and was referred to as "Drury Lane" since that street ran along the east side of the building, though the audience still entered through a passage from Bridges Street. Again, there was a pit surrounded by boxes. There were also two galleries of cheap seats above the boxes. This inexpensive part of the theatre was the "eighteen-penny place" alluded to in William Wycherley's The Country Wife. We don't know exactly what this building looked like, but the Theatre Royal Bristol was partially based on it when that theatre was built in 1766, so we have at least a general idea.

By the end of the 18th century, the Theatre Royal at Drury Lane seemed cramped and outdated, so it was torn down and replaced by a brand-new structure in 1794. It was huge, capable of holding up to 3,600 people. Richard Brinsley Sheridan managed the theatre and bore most of the expenses for its construction. It was a gamble, but he was a gambling man. As long as he packed the auditorium each night, he would be able to not only make his money back, but to make a fortune. Then, on February 24, 1809, the theatre burned down--only fifteen years after it had opened. Sheridan pretty much lost everything.

The present-day theatre opened at the same location in 1812 with a production of Hamlet. Its renovations are probably necessary, but I do hope they retain a bit of the history of the place. For me, Drury Lane will always be special.
Posted by James Armstrong, Playwright at 8:06 PM