If you haven't seen G.B. Shaw's play Caesar and Cleopatra, Gingold Theatrical Group is performing it at The Lion Theatre at Theatre Row until October 12th. And if you're interested in a lively discussion of the play, I'll be taking part in a Shaw Symposium at Symphony Space on Monday, September 23rd.

Officially, I'll be discussing "Building the Shaw canon with Caesar and Cleopatra" as a roundtable of Shaw scholars share our thoughts on the play and GTG's production. I'll be joined by Stephen Brown-Fried, Ellen Dolgin, Andrew M. Flescher, Bob Gaines, David McFadden, and Liam Prendergast. GTG Artistic Director David Staller will be moderating the discussion.

GTG has created some of the best and most innovative Shaw productions I've seen, including an amazing Widowers' Houses and last year's Heartbreak House, which also played at The Lion. I have high hopes for their Caesar and Cleopatra, which stars Robert Cuccioli and Teresa Avia Lim in the title roles. He was wonderful earlier this year in The White Devil, and she made a memorable appearance in The Taming of the Shrew in Central Park in 2016.

The Shaw Symposium will be at 7:00 pm, and there is a $10 donation necessary. You can get tickets through Symphony Space's website, or by coming to their box office at 95th and Broadway. Hope to see you there on the 23rd! 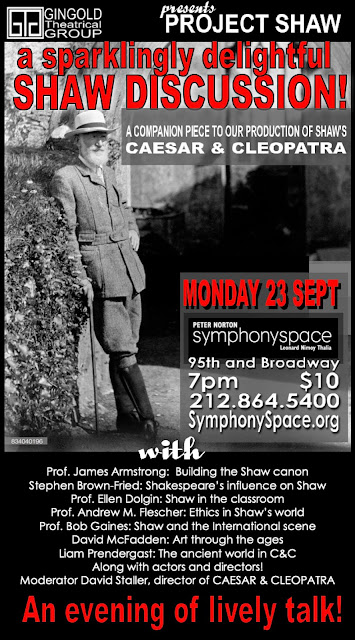 Posted by James Armstrong, Playwright at 9:47 AM