The Age of Garrick

Though the Licensing Act of 1737 kept politics off the stage in Britain for much of the eighteenth century, British theatre continued to make tremendous artistic strides, particularly in acting.

The provincial actor David Garrick moved to London the very year the Licensing Act was passed, and had the good fortune to be coached by Charles Macklin, an actor renowned for his performances as Shylock in William Shakespeare's The Merchant of Venice. At first, Garrick performed at a theatre of dubious legality known as Goodman's Fields, but in 1742 he made his debut at Drury Lane, one of the two patent theatres with a near monopoly on drama in London.  He soon began a long and productive artistic partnership with Peg Woffington, the leading actress with the Drury Lane company. Such was his success, that in 1747 Garrick took over the management of Drury Lane and instituted a number of reforms.

The most important of these reforms came in 1762, when Garrick banned spectators from the stage. Wealthy patrons had traditionally paid extra to sit on the stage itself and be seen as well as watch the actors. The practice was common before the English Civil War, and while it abated during the Restoration period when expensive new scenery was being introduced, theatres at the beginning of the 18th century placed benches onstage for the audience. Garrick abhorred the practice and eliminated the onstage benches. This allowed for greater realism, both in scenery and in acting. He also raised ticket prices to pay for the fancy new sets he was commissioning.

In 1771, Garrick hired the French-born artist Philippe de Loutherbourg to design sets at Drury Lane. De Loutherbourg also made numerous innovations in lighting, which made his sets even more impressive. His sets moved as well, so clouds could drift across the sky, and miniature ships could appear to sail through the water in the distance. Eventually, de Loutherbourg created a miniature stage he called the Eidophusikon, which controlled the lighting and scenery to an extreme degree, but had no room for actors. People paid money simply to watch the brilliant moving pictures, and the Eidophusikon attempted to compete with the theatre itself. Fortunately, the Eidophusikon never put Drury Lane out of business. 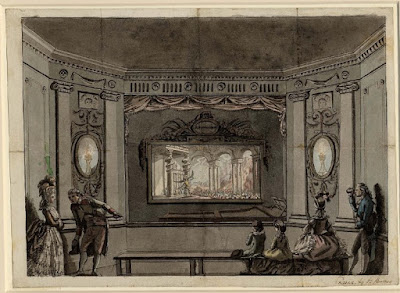 Garrick wasn't satisfied with the new plays being written, however, so he began writing his own. He collaborated with the playwright George Coleman the Elder (best known for his hilarious but misogynistic comedy The Jealous Wife) to write The Clandestine Marriage, which was based loosely on a series of satirical pictures by William Hogarth. Garrick's plays might not have been terribly original, but they were entertaining and remained popular well after his retirement. In 1769, Garrick held a massive celebration of William Shakespeare in the Bard's hometown of Stratford-upon-Avon. Though it was a little late for the bicentennial of Shakespeare's birth five years earlier, Garrick spared no expense in arranging a Jubilee celebration, which featured a pageant of Shakespeare's most popular characters. Unfortunately, heavy rains flooded a special tent for the occasion, and all Stratford was covered with mud. Not to be put out, Garrick wrote a play about the event, called it The Jubilee, and performed it at Drury Lane along with the procession of characters.

Garrick's most important contribution, however, came in raising the standards of acting in the eighteenth century, not just in England, but on the European continent as well. The French philosopher Denis Diderot after seeing Garrick wrote a famous essay called "The Paradox of the Actor" in which he tried to determine what made a great actor's performances so engaging. According to Diderot, great actors like Garrick display the illusion of feeling without feeling strong emotions themselves. The paradox is that the more emotional an actor becomes, the less able he is to convey emotions consistently on stage, while the more rational he is, the better he is to show different emotions night after night. Intelligence was what a great performer needed, not feeling.

Though Drury Lane dominated London's theatre scene under Garrick, the rival theatre at Covent Garden scored a palpable hit in 1773 with a play by Oliver Goldsmith called She Stoops to Conquer. Goldsmith loathed the sentimental comedies that had become popular in the eighteenth century and considered his play a "laughing comedy" since the crazy antics of the characters provoked outright guffaws rather than the knowing smiles of earlier works.

Though not as bawdy as Restoration comedy, She Stoops to Conquer captures much of the energy of earlier comic works, and it helped to pave the way for another playwright, Richard Brinsley Sheridan. In 1775, Covent Garden produced Sheridan's play The Rivals, about a man who creates an alter-ego for himself to be his own rival for the love of the woman he wants to marry. The play features a duel, which had special interest for the audience, since Sheridan himself had fought two widely publicized duels over the honor of his fiancée and later wife, the singer Elizabeth Ann Linley.

In 1776, Garrick retired from the stage, and the newly successful Sheridan bought his stake in Drury Lane. He soon took over the theatre, and tailored his next play, The School for Scandal, to perfectly suit the strengths of the actors in the Drury Lane company. The play was a massive hit, and Sheridan later used his fame to launch a successful bid for parliament. From 1780 onward, he enjoyed a dual career as both a theatre manager and a politician. The mild-mannered Age of Garrick was over, and increasingly the theatre was becoming politically charged.
Posted by James Armstrong, Playwright at 6:20 PM