In 1814, Lord Byron, together with Henry Angelo, made a collage screen for his apartments. On one side he placed images of famous boxers. The other side was filled with depictions of Byron's favorite actors.

Perhaps it should come as no surprise that Byron, so theatrical in his own life, was such a theatre fan. In the center of the screen are portraits of Edmund Kean and Sarah Siddons. Kean in particular seems to loom large over much of Byron's work. 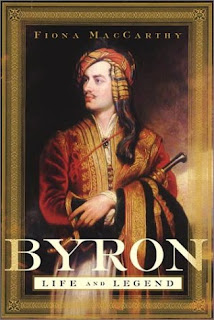 According to Fiona MacCarthy in her biography Byron: Life and Legend, Byron was instrumental in getting Samuel Taylor Coleridge's play Remorse staged at Drury Lane. Later, he tried to get Coleridge to write a new tragedy specifically for Kean. She quotes a letter Byron wrote to Coleridge in 1815, stating: "In Kean, there is an actor worthy of expressing the thoughts of the characters which you have every power of embodying."

It's interesting that Byron writes of the playwright, and not the actor, as embodying characters. But Byron, much like Oscar Wilde after him, put much of his genius into his life rather than just his work, embodying the very principles of which he wrote.

McCarthy makes it clear, however, that Byron was still somewhat scandalized by the Shelleys, who fully lived the philosophies they preached. Byron preferred clandestine affairs. He felt people should have sex with whomever they wanted, provided they were discreet. Percy Bysshe Shelley, still married to his first wife Harriet, traveled openly and without apology together with Mary, as if true marriages were created by love rather than pieces of paper. Now this was shocking!

It was after that Frankenstein summer Byron spent together with the Shelleys on Lake Geneva that he turned in earnest to writing drama. Touring the Swiss Alps, he found inspiration for his play Manfred, whose title character would have been a suitable role for Kean.

Later, when traveling in Italy, Byron watched Vittorio Alfieri's tragedy Mirra, and reportedly broke down into such sobs he nearly fainted. In Italy, he wrote Marino Faliero, complaining that he could not finish writing a single scene without being obliged by some woman or another to go off and commit adultery with her. And yet the Shelley's unnerved him!

Quickly after writing Marino Faliero, Byron composed Sardanapalus, and then The Two Foscari. Though these plays were not performed during Byron's lifetime, the writer still took an active part in the theatre. He even made plans for an amateur production of Othello at the Palazzo Lanfranchi, with himself playing Iago.

When Sardanapalus and The Two Foscari were published in 1821, they were overshadowed by the third play published with them: Cain. In this remarkably powerful piece, the world's first murderer asks Lucifer to teach him the mystery of his being. Though the play is not unfaithful to the biblical accounts of creation, it sparked remarkable controversy.

One British clergyman called Byron "a denaturalized being, who, having exhausted every species of sensual gratification, and drained the cup of sin to its bitterest dregs, is resolved to show that he is no longer human, even in his frailties, but a cool, unconcerned fiend."

Ouch! With critics like that, no wonder Byron paired theatre artists with pugilists! Alas, Kean never did perform in Cain, and neither did anyone else while Byron was alive. 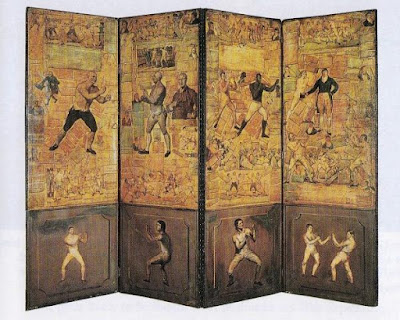 Posted by James Armstrong, Playwright at 7:08 AM