The French Revolution and the London Stage

I recently read George Taylor's book The French Revolution and the London Stage, which tracks theatre on both sides of the channel from 1789 to 1805. It tells a fascinating story that makes me want to read more of the plays of that period. 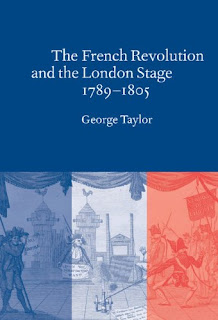 Taylor's first chapter covers England and France in the year 1789. It so happens that on July 14th, when the French were storming the Bastille, audiences at the Haymarket Theatre in London watched Inkle and Yarico, a play by George Colman the Younger that was critical of the slave trade. People in both countries seemed to be calling out for freedom.

Chapter Two discusses the staging of the Revolution, and it is interesting to me how quickly theatres began re-enacting the events of the 14th of July. In August, freedom-loving citizens of London had multiple opportunities to see what had been accomplished by their brethren in France. John Dent produced a spectacle called The Triumph of Liberty; or, the Bastille at the Royal Circus. Astley's Royal Grove Amphitheatre followed that up with Paris in an Uproar; or, the Destruction of the Bastille. By the end of the month, Sadler’s Wells had jumped into the fray with Gallic Freedom; or, Vive la Liberté.

In Paris, historical dramas echoed recent events. Marie-Joseph Chénier's play Charles IX, which he had written in 1787, went into production at the Comédie Français. The story, about how the Cardinal of Lorraine and the Duke of Guise used Marie de Medici to get the king to authorize the St. Bartholomew’s Day Massacre, had clear parallels with the present day. Scheming churchmen and foreign queens certainly didn't look very good in the play. The revolutionary Danton even claimed that "If Figaro killed the aristocracy, Charles IX will kill the royalty."

The following chapter discusses theatre after the Revolution but before the Terror. Chénier’s anti-clerical Henry VIII, banned in 1789, became a hit in Paris in 1791. The next year saw his new play Caius Gracchus, which looked back to Republican Rome for inspiration. The French also turned to Shakespeare, and in 1792 Jean François Ducis premiered his adaptation of Othello (a play later adapted into French by Alfred de Vigny). The French also staged numerous fêtes which celebrated the Revolution in grand public ceremonies.

For the British, however, censorship made it difficult for the theatres to speak openly about a Revolution that was becoming increasingly controversial. Instead, producers turned to gothic dramas that reflected the heightened sense of anxiety. The Haunted Tower premiered in 1789, The Siege of Belgrade in 1791, and The Pirates in 1792. Then, in 1794, John Philip Kemble produced his spectacular Lodoiska, featuring villainous noblemen, imprisoned maidens, and burning castles.

In a chapter on dramatizing the Terror, Taylor discusses the quintessential gothic drama, Matthew G. Lewis's The Castle Spectre. He notes that Dora Jordan played the ingénue, Angela. In the play, men are ineffective, and it is Angela who must stab the villainous Osmond. This event, Taylor says, parallels Charlotte Corday's very real murder of Marat, with the spectre perhaps representing the spirit of the slain Marie Antoinette, looking on and aiding the action.

The following chapter discusses the performers of the era, who seemed to be moving toward a greater naturalism. Taylor also spends a good deal of time on William Betty, the so-called "Infant Roscius" who began his career at age 10, playing adult roles to great acclaim. Apparently, both Kemble and George Frederick Cooke, the leading tragedians of the day, took a brief break from the stage while Bettymania burned itself out, then returned to what they had been doing before the young curiosity came to town.

Taylor argues that the diminutive Master Betty was in some ways a stand-in for Napoleon, the subject of his next chapter. The big play here is Pizarro, Richard Brinsley Sheridan's adaptation of the Incan epic by August von Kotzebue. Jordan again played the ingénue role, Cora, while Sarah Siddons played the weightier role of Pizarro's mistress, Elvira. Apparently, Sheridan expanded this latter role from what Kotzebue had originally written.

The final chapter covers the feeling of alienation many people felt in the wake of the Revolution and how this was reflected on stage. Taylor argues this alienation helped to create the new form of melodrama. Whether or not he is right in this, he certainly gives one food for thought.

Posted by James Armstrong, Playwright at 7:08 AM