In my last blog post, I wrote about the mysterious Mrs. Gibbs. Today, I'll be covering an actor about whom considerably more is known: Alexander Rae. 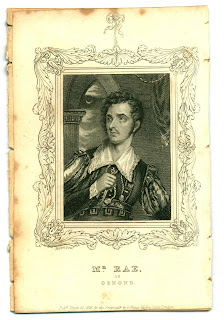 Rae is probably best known for playing Ordonio in Remorse, a tragedy by Samuel Taylor Coleridge. According to his memoir in the 1826 Dramatic Biography, Rae "had the good-fortune to receive a classical education.” His training in recitations of classical texts prepared him for a lifetime on the stage.

Born sometime in May of 1782 (no exact date is given), Rae lost his father at a young age and worked for a while in the office of an army agent. Passing up a chance to go to India, Rae appeared as Hamlet in 1810 at a theatre in Huntington. He later acted in Hamlet at both Bath and Bristol and was favorably received.

Still, Rae was praised for "the elegance of his style, rather than his capabilities as an actor.” He attracted the notice of George Coleman the Younger at the Haymarket Theatre, where he subsequently appeared as Sir Edward Mortimer in Coleman's The Iron Chest. At the close of the Haymarket's season, he proceeded to Liverpool, where he took on the management of a local theatre.

On the circuit, Rae played with both Sarah Siddons and John Philip Kemble. After the Theatre Royal at Drury Lane reopened in 1812 following a disastrous fire, Rae took to the stage there, appearing both in Hamlet and Coleridge's Remorse. The Dramatic Biography calls Rae's Ordonio "a first-rate effort" adding that he "was a picture of horror we shall never forget.” Rae did not entirely capture the tragic spotlight, however, but had to share it with Robert William Elliston, who played Alvar in the play.

Elliston, as it turned out, probably had more of an aptitude for comedy, but at that point in his career he still frequently played tragic roles. It seemed that Elliston would be Rae's rival for the tragic leads, but that was not to be. The next year, Edmund Kean made his Drury Lane debut as Shylock, and the theatrical world would never be the same. Rae acted with Kean in Richard III, but the two reportedly did not get along, and Rae turned to comedic roles. The one part in which he successfully competed with Kean was as De Zelos in Charles Robert Maturin's tragedy Manuel.

Rae eventually rose to become stage manager of Drury Lane, but his tenure did not go well. He was said to have been overly lavish in his expenditures, and his attempts at reviving some classic comedies failed with the public. Leaving Drury Lane, Rae went to the Royalty Theatre. Money troubles followed him though, and soon even greater difficulties. Rae was married, but a certain woman who had fallen in love with him threatened to commit suicide if he would not abandon his wife and move in with her. He obliged her, much to his wife's dismay.

While living with his new mistress, the Dramatic Biography tells us, Rae developed a painful "stone" which caused him physical as well as mental distress. His wronged wife came to his bedside, and the remorseful Rae died under the surgeon's knife. After Rae's death, his fellow actors staged a benefit performance of The Rivals at Drury Lane for his widow and family.

One of Rae's daughters followed him into the theatre, but I have been unable to trace the rest of his family. The general feeling is that Rae's case was one of missed opportunity. As the Dramatic Biography lamented: "He studied little, was frequently imperfect, and may therefore be said to have never given himself a fair chance in the field."

Posted by James Armstrong, Playwright at 9:38 AM