In 1816, the Theatre Royal at Covent Garden decided to revive David Garrick's Jubilee, a celebration of the works of William Shakespeare, as a way to commemorate the bicentennial of the death of the Bard. The theatre decided to have Eliza O'Neill represent the Tragic Muse and a certain Mrs. Gibbs represent the comic muse. But who was this Mrs. Gibbs? 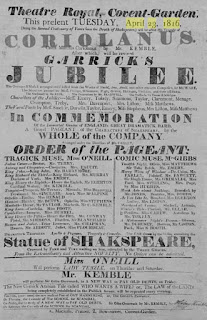 A memoir of Mrs. Gibbs published in London in 1826 gives scant information on her, not even a first name. It does say that she was the daughter of a certain Mr. and Mrs. Logan, born in the year 1770. As Miss Logan, she made her debut at the Haymarket Theatre on June 18, 1783 in the role of Sally in a play called Man and Wife. This was the same year, her memoirist assures us, that "the great Kemble first appeared in London." (John Philip Kemble made his debut at the Theatre Royal at Drury Lane on September 30, 1783, playing the role of Hamlet.)

Just as mysterious as Gibbs's given name is the identity of her husband. Miss Logan began to be billed as Mrs. Gibbs at least by June 20, 1787, when she appeared in Garrick's Miss in Her Teens. Who Mr. Gibbs might have been appears to be anyone's guess. However, George Coleman the Younger took a liking to the talented comedienne, and invited Mrs. Gibbs to join the company at the Haymarket Theatre. Later, Drury Lane hired her, but she quickly jumped ship to join the rival patent house at Covent Garden.

Gibbs continued to perform at the Haymarket during the summers while Covent Garden was closed. The smaller Haymarket, with its lighter fare, seems to have agreed with her comic talents. Coleman created a number of roles for her in his plays John Bull, The Heir at Law, and Blue Devils. She was frequently compared with Dorothea Jordan, the comic actress who became the mistress of the future King William IV. Gibbs had a less exalted lover, but one of consequence, at least in theatrical circles. For many years, she lived together with Coleman.

Coleman and his wife had eloped to Scotland in 1784, and then had their union ratified by a second ceremony four years later. Unfortunately, it was apparently not a happy marriage. Gibbs was better suited for him, and when he delayed finishing a play, she reportedly would harangue him until he completed it. In any case, she was frequently received as Coleman's wife, in spite of their different last names.

Here's how her biographer described Gibbs in 1826:

Mrs. Gibbs's voice is peculiarly pleasing; her person
still retains sufficient marks of beauty, to tell us, what an
exquisite creature she once was; her eyes (what eyes they
were!) are blue; her complexion light; her figure was
always plump, and has of late years been peculiarly so.

I cannot trace her death year, but she seems to have entertained audiences well into her 50s at least. 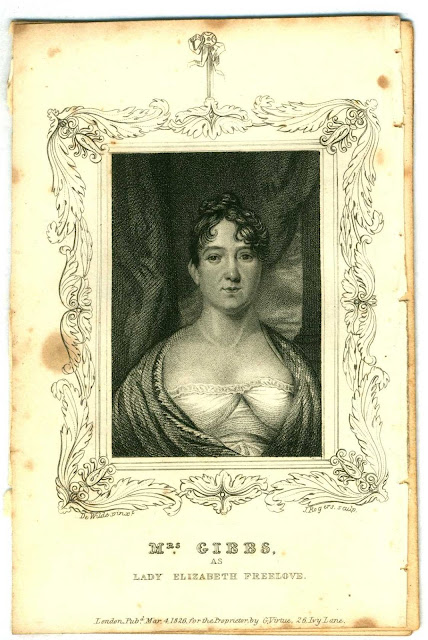 Posted by James Armstrong, Playwright at 9:33 AM