On May 17, 1820, William Charles Macready opened a new play at Covent Garden called Virginius. The play was by James Sheridan Knowles, and according to the author's own preface, he had written it in three months. 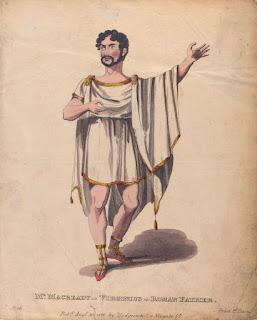 Knowles was careful to credit the Glasgow Theatre, which performed his play a month prior to the opening at Covent Garden. It was Macready who made the play's reputation, though, and to Macready that Knowles dedicated the published script.

According to the critic Michael R. Booth, Knowles originally wrote the play at the suggestion of Edmund Kean, but by the time the playwright submitted it to Drury Lane, the theatre had already accepted a play on the same subject by another author. Virginius had a respectable run in Glasgow with John Cooper in the title role, and a friend passed the script on to Macready, who snatched it up for Covent Garden.

A potential crisis arose when King George IV requested to see the manuscript personally. On the eve of the opening, he gave it back with several lines crossed out--lines that referenced tyranny. Not wanting to offend the new monarch, the company dropped the offending passages. Charles Kemble went on as the young lover Icilius, Maria Foote appeared as the virtuous Virginia, but Macready towered over all in the title role of Virginius.

The story deals with the Second Decemvirate of the Roman Republic. The Romans created the First Decemvirate in 451 B.C. to codify their law in the wake of unrest among the lower plebeian class. All of the city's magistrates resigned so that a council of ten men with dictatorial powers could both run the government and draft a new code of laws. The Decemvirs produced ten bronze tables inscribed with the law, but there was a general consensus that an additional two tables would be needed.

Here's where things get tricky. The original Decemvirate included the two men who had just been elected consuls and had to resign: Appius Claudius Crassinus and Titus Genucius Augurinus. When the Romans elected a new Decemvirate, however, only Appius got re-elected from the old Decemvirate, and the other nine Decemvirs were all his close friends. It seems Appius was the one who had counted the votes.

In Knowles's play, Viginius comments on this situation, but by attacking the people who elected Appius rather than accusing Appius of cheating:

At least Appius said he was sick of ruling. That, too, was likely a ploy. Virginius, for all his anger, does not hate all the supporters of the Decemvirate, though. He agrees to allow his daughter Virginia to marry Icilius, who apparently had a hand in the election. The two young people are in love, and Virginius cannot bear to refuse his daughter her choice.

Trouble brews in Act II, when Appius sees the beautiful Virginia and falls in lust with her. It isn't just me who says Appius doesn't love her, but Appius himself who recognizes that his feelings are a much less patient emotion than love. He says at the beginning of Act III:

It is not love, if what I've felt before
And call'd by such a name, be love--a thing
That took its turn--that I could entertain,
Put off, or humour--'tis some other thing....

Appius hatches a plot to have his friend Claudius claim Virginia was a child of one of his slaves, illicitly sold to Numitoria (the now deceased wife of Virginius) because she was in fact barren. Then, Appius can have his way with Virginia, in spite of the fact she has rejected all of his smarmy overtures thus far. The plot sounds ridiculous, but Claudius has one of his slaves swear she is Virginia's real mother, and the girl's actual mother isn't around anymore to refute the claim.

Act IV is the heart of the play, and it is here that Macready could really shine. Appearing in the Forum, Virginius mocks the idea that his daughter should be taken from him on the word of one of Claudius's slaves:

Is she not his slave! Will his tongue lie for him--
Or his hand steal--or the finger of his hand
Beckon, or point, or shut, or open for him?
To ask him if she'll swear! Will she walk or run,
Sing, dance, or wag her head; do any thing
That is most easy done? She'll as soon swear!

When asked to answer the slave woman's oath, Virginius brings forth his daughter as the answer:

Is this the daughter of a slave? I know
'Tis not with men, as shrubs and trees, that by
The shoot you know the rank and order of
The stem. Yet who from such a stem would look
For such a shoot? My witnesses are these--
The relatives and friends of Numitoria,
Who saw her, ere Virginia's birth, sustain
The burden which a mother bears, nor feels
The weight with longing for the sight of it.

However, as head of the government, Appius is the judge, and since the Decemivate has dictatorial powers, there is no right to appeal. The crowd supports Virginius, but Appius has troops and lictors (government bodyguards) hold them back. Appius declares he has long known that Virginia was born a slave, and he rules that Claudius must take her home. Seeing through the plot, Virginius appeals to the crowd:

Look not on Claudius--look on your Decemvir!
He is the master claims Virginia!
The tongues that told him she was not my child
Are these--the costly charms he cannot purchase,
Except by making her the slave of Claudius,
His client, his purveyor, that caters for
His pleasures--markets for him--picks and scents
And tastes, that he may banquet--serves him up
His sensual feast, and is not now asham'd,
In the open, common street, before your eyes--
Frighting your daughters and your matrons' cheeks
With blushes they ne'er thought to meet--to help him
To the honour of a Roman maid, my child,
Who now clings to me, as you see, as if
This second Tarquin had already coil'd
His arms around her. Look upon her, Romans!

Here it perhaps becomes apparent why the king was so concerned about this play. George IV had a reputation for numerous affairs. His separation from his wife and his possession of a string of mistresses (whom he did not always treat well) made him a decidedly unpopular figure. Audiences could very well associate their monarch with the tyrannical villain of the play.

I won't give away the outcome, but let it suffice to say that this scene helped to secure Macready's reputation. Poor Kean missed his chance when Drury Lane passed on the play. Years later, when Kean's career was on the skids, he decided to take on Virginius, in spite of the fact that it had been some time since he had learned a new role. Kean appeared in the play at the end of 1828, but suffered from unfavorable comparisons to Macready. The unfortunate Kean was dead five years later.

Knowles's play, on the other hand, continued in the repertoire for quite some time.
Posted by James Armstrong, Playwright at 5:16 AM