Did Macready REALLY try to revive the drama?

The Victorian actor William Charles Macready often spoke of "reviving the drama." To him, this meant one thing: the return of verse tragedy. Far from reviving the drama, however, Macready did his part to crush it. 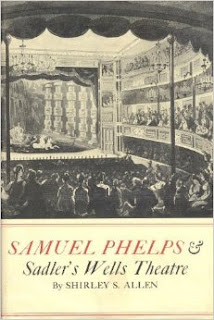 Shirley S. Allen might have been a little biased. She was a biographer of one of Macready's rivals, Samuel Phelps. However, in her book Samuel Phelps and Sadler's Wells Theatre, Allen makes a strong case for Macready acting like the villain in one of the melodramas he claimed to have despised.

When he first saw Phelps act in 1837, Macready wrote that he "displayed intelligence, occasionally great energy, some imagination--not much." Rather ominously, he added, "His best scene decidedly was his death." Macready planned to take over Covent Garden, and in spite of his lukewarm opinion of Phelps, he arranged to hire him.

First, however, Phelps had to make his debut at the Haymarket in the role of Shylock. He was an unqualified success, but his strength as an actor scared Macready more than excited him. The great tragedian recorded in his diary that "an actor's fame and his dependent income is so precious, that we start at every shadow of an actor."

Once Phelps joined Macready's company at Covent Garden, Macready made sure this upstart actor would never upstage him. Phelps made his debut as Jaffier in Venice Preserved by Thomas Otway, opposite Macready's own Pierre. Though the production was a success, Macready gave up the role of Pierre rather than appear with another actor who had garnered greater acclaim from the audience.

Phelps then appeared as Othello opposite Macready's Iago. Again, Phelps won the laurels, and again Macready was petty. He made Phelps act the part of Macduff to his own Macbeth, and aside from that, gave him only one other role (in Rob Roy) for a considerable time. Though Macready was paying Phelps handsomely, he would rather the actor not play at all than become a rival for his own glory. 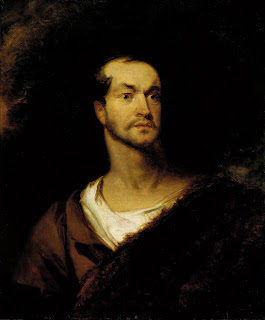 Macready did make some progress toward reviving the drama with a production of Edward Bulwer-Lytton's The Lady of Lyons in 1838. Phelps was not allowed to perform in that piece, and most critics credited its success not to Macready, but to Helen Faucit, who played Pauline, the titular heroine. The following year, Macready premiered another Bulwer-Lytton play, Richelieu, with a title role written expressly for Macready.

Unfortunately, Macready quarreled with the owners of Covent Garden, and he and Phelps both ended up at the Haymarket during the summer of 1839, alternating in the two leading roles in Othello. Much to Macready's pain, Phelps received the better reviews. Macready demanded that the play be withdrawn, despite the fact it was attracting full houses. He set about looking for a new piece, and approached Robert Browning. Surely, if anyone could revive poetic drama in England, Browning could.

But Macready did not think highly of Browning's play King Victor. Taking over the management of Drury Lane, Macready looked for other playwrights to produce. He decided to stage Gerald Griffin's tragedy Gisippus, but he made a bad play even worse, revising it to divide one character into two different parts, just so no one would have a chance to challenge his own preeminence as the lead.

In was in October of 1842 that Macready introduced his famous production of King John. Later that year, he staged the premiere of another new play, Westland Marston's The Patrician's Daughter, with Helen Faucit in the title role. The reviewers praised Faucit, Phelps, everyone but Macready. The play only lasted 11 performances. Macready turned down another tragedy, William Smith's Athelwold, because he felt there was not a sufficient leading role for himself. 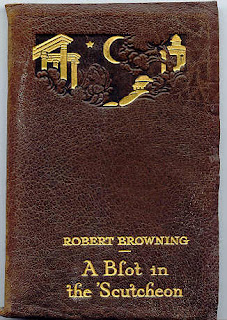 Then, Macready finally turned to Browning, who more than a year before had given him the script to A Blot in the 'Scutcheon. Macready treated the play with contempt, though. In the past, he had invited authors to read their plays aloud to the cast. In this case, he assigned that duty to the prompter and left the room. Though he hadn't been present for the reading, Macready told the author that it had been a disaster and demanded a revised second act. Browning complied.

Macready eventually divorced himself from having anything to do with A Blot in the 'Scutcheon, assigning Phelps to take his place. Toward the end of the rehearsal process, Macready inserted himself again, suggesting Browning change the ending so that Phelps would be deprived of a dramatic death scene. Browning declined, and in his diary, Macready called the author "a very disagreeable and offensively mannered person." For his part, Browning saw the suggestion for what it was, a plot to avoid giving Phelps the opportunity of acting in a true tragedy.

According to Allen, the play premiered to "tumultuous applause." Phelps called for the author to come take a bow, but Browning declined. Macready was not called to the curtain, a fact that made him angry. Reviewer after reviewer, even those hostile to Macready, praised the play. Audiences flocked to see it, packing Drury Lane. Yet Macready pulled the play at the height of its popularity, never allowing it to be performed again under his management. Writing in his diary after the whole affair was over, Macready called Browning a "wretched insect."

The year 1843 saw the end of the monopoly Drury Lane and Covent Garden had enjoyed on "legitimate" drama in London. Macready had always argued that the monopoly was necessary, but in 1843, he asked the owners of Drury Lane for a decrease in rent. (He was also asking each actor to accept a one-third reduction in pay.) The owners declined.

Phelps successfully revived the adaptation at Sadler's Wells, presenting the play 30 times in his first season of managing the theatre. In 1848, however, Macready wrote to Phelps about the play, saying, "as I intend to act it myself during my present engagement, I do not consider it right to extend the permission for performance at present." Phelps must have been confused. Since when did he need Macready's permission to perform a play the actor had not written?

Perhaps trying to save face, Macready then magnanimously granted Phelps a permission he had not asked for nor required. "You will therefore receive this note, if you please, as the requisite permission to perform the play of the Bridal at Sadler's Wells," Macready wrote a few days later.

When Macready finally retired in 1851, he did give Phelps some credit, praising the "learned and tasteful spirit of his productions." According to Allen's account, Phelps, not Macready, had actually done the most to revive the drama.

At the end of the 1856-57 season, Phelps chaired the Theatrical Fund Dinner. Charles Dickens gave a tribute to the actor, praising his "sensible subservience of the scene-painter and the mechanist to the real meaning of the play."

Dickens was a good friend of Macready, but he, too, saw the value of what Phelps had done.
Posted by James Armstrong, Playwright at 7:28 AM