Last Chance to See The Changeling

If you haven't seen Red Bull Theater's production of The Changeling, this weekend is your last chance. Don't let the snow keep you away. Shows will still go on as scheduled, and this is a production you won't want to miss. 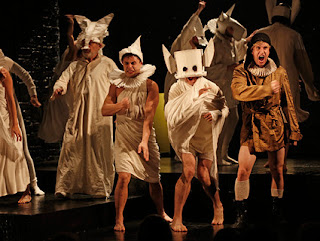 I had the good fortune to see The Changeling last night just as the snow was starting to come down in New York. This jewel of a play by Thomas Middleton and William Rowley is perhaps a flawed jewel. Some commentators have remarked the text we have for the play seems to be missing a scene. (Where is the entertainment the lunatics are supposed to perform for the wedding?)

But just as the flaws in a gemstone can most bring out its luster, the supposed weaknesses in The Changeling add a sense of unpredictability. When Beatrice-Joanna (Sara Topham) sees the handsome nobleman Alsemero (Christian Coulson) at church, the two fall in love. Since she is already engaged to Alonzo (John Skelley), and since this is a revenge tragedy, we're pretty sure we know where this is all headed.

Only when Beatrice-Joanna employs the ugly and loathed servant De Flores (Manoel Felciano) to do the deed, things take an unexpected turn. Love and loathing become inextricably linked, and gasps can be heard in the audience. Yes, indeed, a play first performed in 1622 still has power to shock jaded New York audiences in the 21st century.

The madhouse scenes are particularly memorable, thanks in large part to the costumes designed by Beth Goldenberg. Marion Williams's set design, which provides mirror images of the actors at key moments, is also quite effective. As usual, Red Bull founder Jesse Berger provides excellent direction for the whole ensemble.

If you want to go, hurry to the Lucille Lortel Theatre tonight or tomorrow afternoon for the final performances. For more information go to: