In her book Ziegfeld Girl, Linda Mizejewski examines the iconic dancers appearing on Broadway in the early twentieth century, who came to symbolize a certain feminine ideal in America for decades to come. 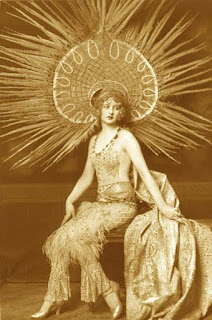 Florenz Ziegfeld Jr. staged elaborate reviews from 1907 to 1931, but even after the shows disappeared during the Great Depression, versions of his famous chorus girls continued to haunt American film. The name "Ziegfeld" even became shorthand for a particular style of glamour.

Though he had already been staging shows for years, in 1915 Ziegfeld began hiring fashion mannequins modeling clothes in department store windows to perform on stage. Mizejewski sees these performers as functioning in the same way onstage as they did as department store advertisements, producing consumer desire and creating a trademark identity.

Long before that, Ziegfeld's first big star was Anna Held. Though Held was born in Warsaw and began her career in the Yiddish theatre in London, Ziegfeld re-packaged her as a Parisian chanteuse. He engineered outrageous news stories about her, such as that she took a daily bath in fresh milk, and he even invited in reporters to witness the event. Held starred in a succession of musical comedies from 1896 to 1912. Though she never appeared in the Follies, she left her mark on all of Ziegfeld's later shows.

When Ziegfeld produced the first of his Follies in 1907, he replaced Held with younger, more American-looking girls. Chief among them was Lillian Lorraine, who mirrored Held's milk-bath trick by singing the song "Nothing but a Bubble" from a soap-filled tub. Ziegfeld Girls came to give beauty advice in newspapers and magazines, gaining female as well as male fans.

Once sound came to motion pictures, movies inevitably aped the Ziegfeld style. The first all-sound musical film, 1929's Broadway Melody, featured an elaborate musical review produced by "the Great Zanfield." Though Ziegfeld himself hated Hollywood, he married the film star Billie Burke and was involved in a "cinematic documentation" of his Follies called Glorifying the American Girl. When the film was released in 1929, it bombed.

As the Depression-era film musical took off, Ziegfeld was left behind. The Follies gave its last performance in 1931, and Ziegfeld died the following year. Mizejewski notes that Hollywood continued to honor him in the 1936 film The Great Ziegfeld and later in 1941 with The Ziegfeld Girl starring Lana Turner, Hedy Lamarr, and Judy Garland.
Posted by James Armstrong, Playwright at 8:04 PM