It's the end of the year, and like many others, I'm putting together a round-up of the best new productions I saw that opened in New York City in 2015. Some of my choices might seem unconventional, while others will surprise no one. Here they are, in reverse order:

10. Allegiance - With all the great new Broadway musicals opening this year, Allegiance is in danger of getting lost in the shuffle. It shouldn't be.

9. 'Tis Pity She's a Whore - Red Bull Theater Company usually does good work, and their production of John Ford's masterpiece was no exception. 'Tis Pity proved once again that you don't have to have the budget of The Royal Shakespeare Company to put on good classical drama.

8. Wolf Hall - Of course, if you do have the budget of the Royal Shakespeare Company, it doesn't hurt. The RSC's adaptation of Hilary Mantel's first two novels about the life of Thomas Cromwell didn't gain as much attention (or fill as many seats) as it did in London, but it was still worth seeing. Wolf Hall was a magnificent display of skilled theatre professionals doing precisely what they do well.

7. Amazing Grace - Speaking of shows not embraced by Broadway, Christopher Smith and Arthur Giron's fantasia on the life of John Newton drew the ire of critics, but thrilled those who had enough good since to ignore them and come anyway. I cried more at this show than at anything I've seen in years. As with Allegiance, the songs did not always rise to level one might hope, but the storytelling was both moving and timely.

6. Cymbeline - Though The Public Theatre seems to misfire with their Shakespeare productions as often as they produce a hit, this summer's Cymbeline was a delight. Hamish Linklater and Lily Rabe were hysterical as the play's romantic leads, but the best thing about this production was how the small cast came together to create a true ensemble. Tasteful audience interaction and superb music by Tom Kitt also served to make this a memorable production.

5. Something Rotten - Even more memorable than some of the many Shakespeare productions I saw this year was Something Rotten, the Broadway musical making fun of the Bard. Yes, I saw Fun Home, which beat it out for the Tony this year, but I found myself seated where that play's ill-conceived direction showed nothing but the actors' backs. Something Rotten by contrast has not only a great score, ingenious lyrics, and a creative book, it's also well directed and a pleasure to watch.

4. Freight: The Five Incarnations of Abel Green - Howard L. Craft's one-man play featuring J. Alphonse Nicholson, probably hasn't made it onto a lot of people's top-ten lists, but that's because they didn't see it. Beginning at the dawn of the 20th century and proceeding to the present day, Freight manages to examine the American experience (and more specifically the African-American experience) in ways that are constantly surprising. Each of the play's five scenes move forward through history, yet we seem to revisit the same set of characters over and over again, reminding the audience that even as some things change drastically, others remain tragically the same. 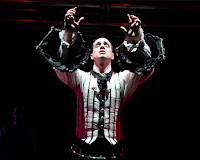 3. Nevermore: The Imaginary Life and Mysterious Death of Edgar Allan Poe - Though Nevermore came to New York once before, this creation by Catalyst Theatre had evolved since then, and it's production at New World Stages counted as a Broadway premiere. It didn't hurt that I saw the play on Mr. Poe's 206th birthday, but my own fan-boy-ing aside, this is one of the most creative and innovative plays I've ever seen. Bretta Gerecke's production design is a goth's dream come true, and Jonathan Christenson's text sounds so natural we hardly notice the play is almost entirely in verse. Like one of Poe's characters, Nevermore doesn't want to stay buried, and we should all be thankful for that!

2. Hand to God - I admit that I came late to this party. Hand to God was a hit off-Broadway way before it opened this year on the Great White Way, but this production was astonishing. In spite of the fact that he is clearly one of America's great playwrights, a Broadway hit still has not allowed Robert Askins to give up his bar-tending job, but that's just the state of the economics of this country's theatre. Never mind. This tale of a high-school misfit engaging in "puppet ministry" in a church basement continually goes to darker and more unexpected places, and Askins' voice deserves to be heard. I'm a sucker for puppets, and this show uses puppetry in ways that are dirtier than Avenue Q and yet with more skill than is hardly ever seen.

1. Hamilton - Okay, no surprise here. Since it opened off-Broadway at the Public, Hamilton has been the hottest ticket in town, but not without reason. Lin-Manuel Miranda has crafted a magnificent show out of American history and American popular culture. The music is exciting, the lyrics are smart, and the story of Alexander Hamilton's life and death, even to those who already know it, is enough to break your heart. Count me along with politicians as diverse as Barack Obama and Dick Cheney as one of the many fans of this show. If you can't see it right away, get the cast album. Listening to it reminds you of so much that the American musical is and can be. Ten dollar tickets (a Hamilton for a Hamilton) are still available through a lottery before each show, but good luck getting them. Spring for a regular ticket. It's worth it.

So that's my list! Honorable mentions this year to Doctor Faustus, I Will Look Forward To This Later, and Spring Awakening!
Posted by James Armstrong, Playwright at 4:46 PM