Romanticism (It's All in the Name...)

Three books, all with the same title, Romanticism, deal with the same topic. Indeed, all employ the same key word in discussing the art and philosophy of the late eighteenth and early nineteenth centuries. Yet each of the books' three authors, Aiden Day, David Blayney Brown, and Michael Ferber, understand the term "Romanticism" in slightly different ways.

Day's work, published as a part of the New Critical Idiom series by Routledge, begins its introduction by quoting heavily from M.H. Abrams, whose book The Mirror and the Lamp helped to illuminate Romanticism for the 20th century. In his first chapter, "Enlightenment or Romantic?", Day then sets up the dichotomy between Enlightenment thinking and Romanticism that is often rehearsed by scholars. On the Enlightenment side are figures like William Godwin, who "argued that human beings act in line with reason and that it is impossible for them to be rationally persuaded by an argument without their conduct being regulated accordingly." Romanticism, by contrast, in the works of William Wordsworth and Samuel Taylor Coleridge, is a "celebration of subjectivity."

The second chapter looks at constructions of the term "Romantic" which first appeared in the 17th century. Thomas Shadwell wrote disapprovingly of all things "Romantick" in the preface to his 1668 play The Sullen Lovers. By 1820, debates over Romantic literature raged on the European Continent, but Lord Byron declared he saw no conflict between the "Classical" and the "Romantic" among English writers. Later critics latched on to the term "Romantic" to describe a variety of authors in Britain, but Day warns against dubbing movements in retrospect. "Literature is not" he contends "something which can be regarded as occupying a 'trans-historical' space, but something which must be read as subject to the discourses and ideologies of a particular time and place."

Day's project is best summed up by the title of his third chapter: "Enlightenment AND Romantic." For Day, these two movements are inextricably linked. On the one hand, writers of the Romantic era continued to work towards the progressive social justice championed by Enlightenment figures like Godwin, while at the same time their focus did shift to that of the interior rather than the external world. A key figure here is Percy Bysshe Shelley, whose commitment to social change informed his "study of solitary imagination." Mary Shelley's novel Frankenstein can even be read as a defense of Day's "and" proposition, since the broodingly interior Frankenstein must ultimately face the consequences of the creature he has unleashed onto the world. As Day puts it, "the writings of those who have formerly been defined as Romantic are not necessarily anti-Enlightenment in any simple sense."

Though that might seem a fitting conclusion, Day includes a final chapter on "Gender and the Sublime" analyzing some of the consequences of Romantic theory first postulated in the eighteenth century by Edmund Burke. Certainly, Burke genders the sublime as masculine and its companion "beautiful" as feminine. Day's point, however, is that this gendering continued to influence Romantic poets. For instance, Wordsworth gendered Nature as feminine, but the female Nature only aided him in apprehending a higher "invisible world." This higher world, Day argues, is associated with the interior mind of the poet, and is thus gendered as masculine. Such arguments break down when the author is a woman, but Day contends that female writers of the period were skeptical of feelings of the sublime and instead focused on nature herself. 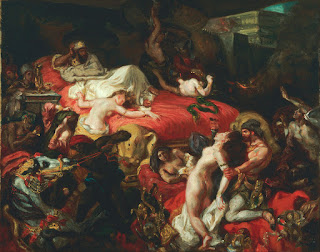 David Blayney Brown takes a different approach to Romanticism. While Day focuses on poets and novelists, Brown is interested in painters. He begins his introduction with an examination of Eugène Delacroix's painting The Death of Sardanapalus. He claims the "moral vacuum" at the heart of the piece is "all the more shocking for ignoring the message of the play by the English poet Lord Byron from which he had taken his subject." Notice that Day, discussing literature, ignores drama, while Brown, examining the visual arts, pays close attention to the theatre.

Brown finds a literary parallel for Delacroix's Romanticism in Victor Hugo, whose 1827 preface to his play Cromwell "advocated a rich variety of expression and experience to reflect the complexity of the world and the self, rather than the cold formalism of classical drama, and recognized the value of the ugly or grotesque in engaging the senses, rather than beauty in winning only admiration." For Brown, The Death of Sardanapalus is a "pictorial equivalent" to Hugo's theoretical preface.

Day emphasizes the continuity between the Enlightenment and Romanticism, but Brown stresses how revolutionary the new movement was. He claims: "Not since the Renaissance had such a profound change come over the Western consciousness." Instead of incorporating a collective ideal, the Romantic artists "emphasized individual experience, feeling, and expression." This, of course, came from the French Revolution, which Day emphasizes, but also from the rise and fall of Napoleon. As Brown puts it: "Romanticism was born in opposition and sorrow, in social or national crisis and in individual trauma." 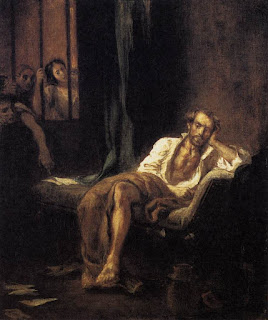 Brown traces the term "Romantic" to Friedrich Schlegel, who in the first issue of the journal Athenaeum in 1798, identified the Romantic with "progressive universal poetry" not based on "inherited and culturally specific forms." Schlegel was writing in the German university town of Jena, which became a hotbed of Romanticism. Though not in Jena, the German writer Johann Wolfgang von Goethe contributed greatly to the movement as well, and Brown cites Goethe's 1789 play Torquato Tasso as an inspiration for Delacroix's Tasso in the Madhouse, painted fifty years later.

Tasso was a Renaissance poet and playwright, but more modern poets also provided inspiration to Romantic artists. Brown cites Thomas Chatterton, a poet whose suicide in 1770 inspired Henry Wallis (painting in the 1850s) to create the magnificent Death of Chatterton, now hanging in the Tate Gallery in London. The cult of Chatterton was not confined to England, either, as Brown observes that the French writer Alfred de Vigny turned the poet's story into the play Chatterton, which "was a hit in Paris in 1835."

So while Day is interested in Romanticism as a philosophical movement in dialogue with the Enlightenment, Brown sees it as an artistic movement born of political turmoil. Michael Ferber wrestles with both of these concepts in his Romanticism, which bears the subtitle A Very Short Introduction. For him, Romanticism is both an intellectual movement and an artistic movement, and while he sees both sides as distinct, he does not seem to emphasize one over the other. Both of these elements, the philosophical and the aesthetic, are present in the pre-Romantic movement Ferber identifies as Sensibility.

Sensibility is a term that was much more in use in the eighteenth century than "Romantic" or "Romantick." It was associated with such works of "storm and stress" as Goethe's The Sorrows of Young Werther and with Gothic writers, including Horace Walpole and Matthew G. Lewis. Ferber also connects it to poets like Mary Robinson, as well as the hugely influential critic and novelist Madame de Staël. 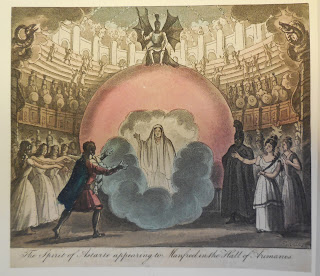 While Ferber successfully traces elements of Sensibility into Romanticism, he definitely seems to be coming at Romanticism from a position of greatly misunderstanding the period's drama. I can overlook his calling Shelley's Prometheus Unbound the poet's "greatest work" as that is a matter of taste. Downright strange, however, is Ferber's comment that Byron's Manfred is "unperformable." Is Ferber really unaware of the many, many successful performances there have been of Manfred? Samuel Phelps was probably the most famous actor to produce the play, but Manfred became so popular that toy theatre versions were made.

For all its faults, though, Ferber's book does give a decent introduction to Romanticism. It attempts to be more balanced than either Day or Brown, gazing into the philosophical and the aesthetic alike. In the end, as Ferber suggests, neither side can be fully understood without the other.
Posted by James Armstrong, Playwright at 6:58 PM