The Evolution of Madame de Staël

Anne Louise Germaine Necker was an odd fish. Her parents were Swiss Protestants who settled in Paris in the mid-eighteenth century. The year after she was born, her father went into politics, eventually rising to become the Minister of Finance for King Louis XVI.

Did I mention that her dad was Jacques Necker? You know, the financial genius who did everything he could to save Louis's rear end, and whose dismissal by the king helped to precipitate the French Revolution? Yeah, that Jacques Necker.

And her mom? That would be Suzanne Curchod. She used to hang out with Diderot, and she exchanged letters with Rousseau and Voltaire. Edward Gibbon wanted to marry her, but she pretty much turned him down. 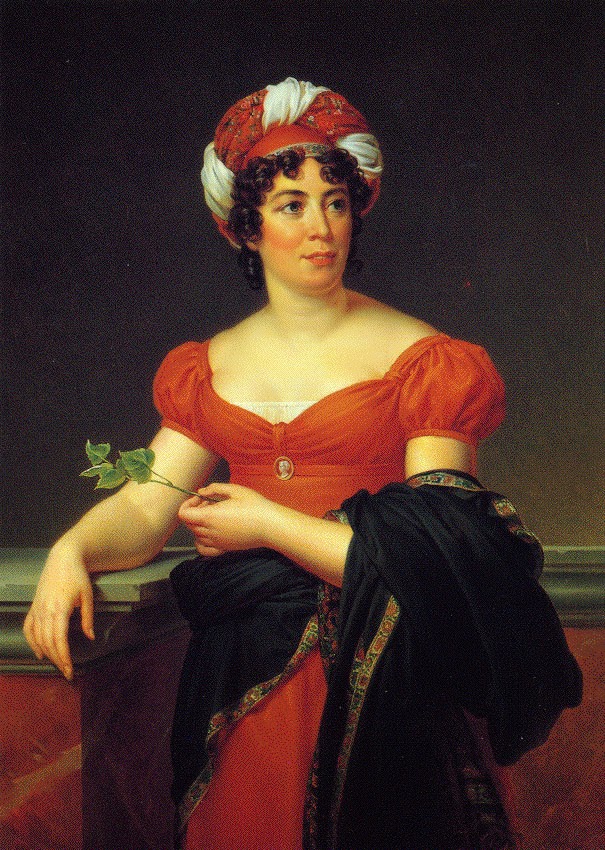 So with those two as your parents, it's probably hard to not be a genius. (Especially when you're an only child and your brilliant father dotes on you all the time.)

When she was 20, Germaine married the Swedish ambassador to Paris, Eric Magnus Staël-Holstein. They split after a couple of years, but she took his name, becoming known to history as Madame de Staël.

Madame de Staël published--under her own name--some rather radical little pieces right before the Revolution. She had to flee the Reign of Terror, but she returned to France after the fall of Robespierre and wrote a fascinating book called The Influence of Literature on Society. With this work of literary criticism, de Staël broke with traditional French Enlightenment thinking and began a journey along the road to Romanticism.

The Influence of Literature on Society holds that the rules of good taste are not arbitrary, but are based on "universal truths" that are "unanimously approved by all mankind." The book claims local customs often force authors of genius to depart from good taste, but that these minor errors in style should not obscure the greatness of works tainted by barbarous (read, non-French) customs.

The great example of this, of course, was Shakespeare. In her chapter on Shakespearean Tragedy, de Staël writes:

She claims that Shakespeare is superior to the Greeks in his portrayal of the passions, but inferior to them in terms of artful composition, citing "dull patches, useless repetitions, and incoherent images." The reason for these flaws, she claims, was that Will had to write for an ignorant audience. One gets the sense she thinks that if Shakespeare had only written for more civilized, French theatre goers, then his plays would have been perfect.

Later on in the book, de Staël links the style of Shakespeare and other English writers with the authors of Germany, theorizing about a type of imaginative literature emanating from the northern countries of Europe. While she does not prefer this literature to that of France, she recognizes its power, and she admits that highly structured French verse cannot always contain the deepest feelings of human passion. Ultimately, the book advocates "an intermediate genre between the decorum of the French poets and defects in taste of the Northern writers."

In 1800, de Staël still couldn't get beyond seeing Shakespeare--and other "Northern" writers--as being somehow defective. Perhaps writing her own imaginative works helped to change her mind. In 1802, de Staël published Delphine, an epistolary novel examining the roles of upper class women. She returned to France the next year, but she got in hot water with Napoleon and ended up touring Germany with her lover, a fellow Swiss-French writer names Benjamin Constant.

Now that she was spending some serious time in Germany, de Staël's feelings about that country and its literature began to change. She saw Goethe's theatre in Weimar and met Schlegel in Berlin. She then took a tour of Italy and wrote a new novel, Corinne. It was in 1810 that she wrote her second important piece of criticism: Germany.

Napoleon ordered all copies of the book destroyed. Three years later, she was able to have the book republished in London. What was it that made this book, more than Corinne, more than Delphine, more than The Influence of Literature on Society, so dangerous to the French Empire?

As de Staël points out in the book, many people in France had come to use the term "classical" as a synonym for perfection. French art was "classical" because it was based on Greek and Roman models. "Romantic" art by contrast had its origins in the songs of the troubadours of the chivalric age. In Germany, de Staël had the nerve to say that "classical" art wasn't necessarily the best way to go. In one passage she observed:

French poetry, being the most "classical" of all modern poetry, is the only modern poetry not familiar to the people. The stanzas of Tasso are sung by the gondoliers of Venice; Spaniards and Portugese of all classes know the verses of Calerdon and Camoëns by heart. Shakespeare is as much admired by the common folk of England as by the upper classes. Poems of Goethe and Bürger are set to music and can be heard from the banks of the Rhine to the Baltic. Our French poets are admired by the cultivated classes of France and the rest of Europe, but they are completely unknown to the common people, and to the middle class, even of the cities.

Thus, Germany linked all of French literature to the old aristocratic regime, and it associated foreign literatures with egalitarianism, which the Revolution had allegedly championed.

Madame de Staël was particularly biting when it came to drama. She attacked the French for holding fast to the unities of time and place when unity of action was the only one that really mattered. She did not advocate that French playwrights should adopt the methods and models of the Germans, but she welcomed foreign plays as a way to generate new ideas

Friedrich Schiller's Wallenstein trilogy seems to have greatly moved her. She noted that German audiences watching the play did not mind lingering over lengthy scenes, appreciating the feelings of the characters rather than only being on the lookout for the plot. She expressed a desire to see Wallenstein on the French stage, but she added that the play demanded a "youthful spirit" that many in France lacked.

Acting in France was too bound by what de Staël described as "the art of declamation." She praised German actors, such as August Wilhelm Iffland, as well as the British actor David Garrick. The French actor she most admired was François-Joseph Talma, who found new ways of acting old scenes in order to breath fresh life into them. She concluded a long digression on Talma by saying:

The artist gives as much as is possible to French tragedy of what, justly or unjustly, the Germans accuse it of lacking: originality and naturalness. He knows how to characterize foreign manners in the diverse plays in which he acts, and no actor hazards greater effects by simple means. In his declamation Shakespeare and Racine are artistically joined. Why won't dramatists also attempt to unite in their compositions what the actor has so well combined in his acting?

Germany was more than mere literary criticism. It included a manifesto for a new type of dramaturgy. Napoleon, who had limited the number of theatres in Paris and sought to tightly regulate drama, would have none of that. But all the Napoleons in the world couldn't keep de Staël's successors, including romantic playwrights Alexandre Dumas and Victor Hugo, from ultimately conquering the French stage.
Posted by James Armstrong, Playwright at 6:39 PM