It's that time of year again, and I'm compiling a list of the best new shows I saw in New York in 2014.

This year, the same rules apply. This list is only shows that opened in New York City in 2014. (Sorry, Matilda!) However, given my recent post on the top 12 plays of the late 18th century, I'm increasing my picks to a round dozen. Here they are in reverse order:

12. El Año en que nací  This documentary theater piece played at La Mama in January as part of the Under the Radar Festival. Performed in Spanish, with English supertitles, it featured young people imagining what life had been like in Chile for their parents around the years when they had been born. Playwright and director Lola Arias beautifully wove together narratives by each of the cast members, creating a haunting portrait of Chile under Pinochet.

11. Billy & Ray  This production at the Vineyard Theatre could hardly have been more different from the avant-garde style of Lola Arias, yet it also attempted to recreate true events. In this case, the action surrounded the writing of the screenplay for Double Indemnity, one of the most influential noir films of all time. Billy Wilder and Raymond Chandler, both brilliant writers in very different ways, collaborated to pen the screenplay, and the experience knocked poor Chandler off the wagon. Comic playwright Mike Bencivenga turned that story into a delightful, frequently farcical play that provided a platform for actors Vincent Kartheiser (Wilder) and Larry Pine (Chandler) to show their stuff. The result was an evening of pure magic.

10. Tamburlaine the Great  Christopher Marlowe might have been basing his megalomaniacal hero-villain on a real person, but facts in this play scarcely matter, and Theatre for a New Audience's production directed by Michael Boyd deftly set the production in a timeless era with geographical differences only hinted at from time to time. War, bloodshed, and pointless slaughter remain constant, no matter where or when they might occur. It's still playing until January 4, so get your tickets here.

9. pool (no water)  Mark Ravenhill's play received an excellent production at the Barrow Street Theatre in November, thanks to the One Year Lease Theater Company. Director Ianthe Demos broke up the famous in-your-face playwright's block text into five voices, performed by a superb cast of actors. The ingenious set consisted of only a handful of long, white benches, which the cast rearranged in astonishing ways. The story, which follows a group of artists invited out to visit the California home of one of their former associates, might not seem terribly moving (in part because the characters themselves are such terrible people), but innovative staging and exceptional acting made this piece a pleasure to watch, even as increasingly horrible things began to happen.

8. Lady Day at Emerson's Bar & Grill  This play by Lanie Robertson is sensational even without a star like Audra McDonald. However, with McDonald giving the performance of a lifetime, how could you not love it? James Noone provided a set design that transformed the Circle in the Square into a jazz club for legends fallen upon hard times. Instead of just a single piano player accompanying Billie Holiday, the audience was treated to a three-piece band that created a haunting and memorable sound. If you missed it, fortunately there's a cast album available.

7. Tristan & Yseult  Esteemed British company Kneehigh brought this fresh take on an old legend to St. Ann's Warehouse. Though the production contained less dance than I anticipated, I was not disappointed. Writers Anna Maria Murphy and Carl Grose kept a contemporary feel for the piece, with occasional nods to the medieval source material and the famous opera by Wagner. Most moving for me me was the portrayal of Whitehands, played by Kristy Woodward, who commented on the action with the aid of the Lovespotters, a chorus of crooners who observe love at arm's length but never engage in passion themselves. The audience, however, has no choice but to engage emotionally, whether flying with elated lovers or burning with despair in this production so skillfully directed by Emma Rice.

6. Red Velvet  Kudos to St. Ann's Warehouse for making the list twice with a second British import. Tricycle Theatre brought the 19th-century Shakespearean actor Ira Aldridge to life in this wonderful new play by Lolita Chakrabarti. Adrian Lester, known for his own Shakespearean acting, played Aldridge with both easy grace and simmering anger. As a bonus for theatre history nerds, both Charles Kean and Ellen Tree made appearances in the play.

5. Machinal  In January, Roundabout officially opened this stunning revival of Sophie Treadwell's classic play. I saw it in previews and was quite moved by Rebecca Hall's magnificent performance as a doomed murderess. Treadwell's expressionist drama gives the audience nine scenes of descent into an increasingly mechanized life. This production also featured transitional scenes, as Es Devlin's set rotated to reveal new rooms, like fresh cages for urban rats. Director Lyndsey Turner skillfully helmed the play, steering us toward the inevitable conclusion, where the true horror of the machine, literal as well as metaphorical, becomes apparent. This was the kind of production that makes me regret not getting a chance to see more of Roundabout's plays.

4. That Poor Dream  The Assembly's modern-day adaptation of Great Expectations had me on two fronts, adapting a work by my favorite novelist and setting it aboard a familiar Metro North train headed from Grand Central to Connecticut. Though the piece skillfully uses much of the dialogue by Dickens, it branches out to explore how the issues in the novel apply to the United States in the 21st century. I'm writing in the present tense now because while That Poor Dream closed in October, it is reopening in January for six performances at The Tank. It's playing only from the 9th through the 11th, so get our tickets here.

3. King Lear  The Public Theater doesn't always do Shakespeare to my liking, but they nailed it this year with this magnificent outdoor production starring John Lithgow. Though excessively long (combining Shakespeare's two texts of Lear to create an extended version lasting well over three hours), this production gave a moving portrayal of a once-great man slipping into madness and struggling to regain his senses (and his dignity) again. Chuckwudi Iwuji, who also played Bajazeth in Tamburlaine, was a memorable Edgar, feigning madness with compelling vigor. His father Gloucester, played by Clarke Peters, was also quite effective. Though the set (designed by John Lee Beatty) might not have been as creative as the one for That Poor Dream, it worked incredibly well in Central Park's Delacorte, especially with lighting designed by Jeff Croiter and projections by Tal Yarden. Thankfully, director Daniel Sullivan brought it all together this time. 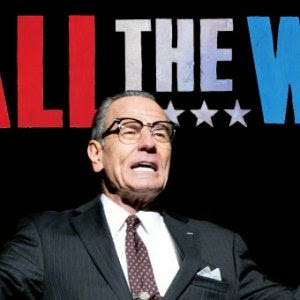 2. All the Way  Amazingly, I never blogged about this show, but perhaps I just wanted to keep the memory of it pure in my mind. The last time playwright Robert Schenkkan had a play on Broadway was The Kentucky Cycle in 1993. I saw that play as a freshman in college, and it left quite an impression on me. Now, more than two decades later, Schenkkan was back again with another play exploring America's history. This one focused on L.B.J.'s efforts to get the Civil Rights Act passed and then win re-election so the Republicans wouldn't smash it all to pieces. Bryan Cranston played President Johnson impeccably, virtually disappearing into his character. The rest of the cast was exceptional as well

1. Macbeth  Hands down, this was the theatrical event of the year. Kenneth Branagh starred in and co-directed this production at the Park Avenue Armory. Doctor Who's Alex Kingston played Lady Macbeth, and Jimmy Yuill (Captain Jamy from Branagh's Henry V) was Banquo. Though originally performed in a deconsecrated church, this production re-imagined itself for its new home in the Armory. It used the historic building for great effect, and when the doors opened into the massive drill hall, it was impossible not to be in awe of the Scottish heath that had been built inside the building. Open flames, clanging broadswords, and blood, blood, blood abounded. Even better, however, was watching Branagh illuminate Shakespeare's words in ways only he can do. The "Tomorrow and tomorrow and tomorrow" speech seemed fresh and new, as if we were hearing it for the first time, even though many of us had been forced to memorize it in high school. Thank you, Mr. Branagh! And please come back to New York soon!

Honorable mentions include Red-Eye to Havre de Grace, Row After Row, and Hellman v. McCarthy. Here's to an even better theatre year in 2015!
Posted by James Armstrong, Playwright at 9:29 PM