Harley Granville Barker was one of the more important British playwrights of the early 20th century. The actor-manager famously penned The Voysey Inheritance, which premiered at the Royal Court Theatre in 1905. However, as I was recently reminded by an issue of The Shavian, he also appeared as an actor in a number of the plays of George Bernard Shaw. 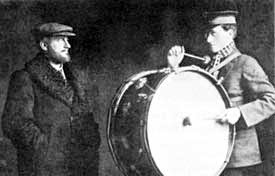 Later in 1905, Granville Barker originated the role of Adolphus Cusins in Major Barbara. This, however, was without McCarthy. When Major Barbara proved a disappointment following the successes of John Bull's Other Island and Man and Superman, Shaw blamed her absence. Concerned that she might leave the stage after marrying Granville Barker, Shaw wrote to her in a letter that his sole successes had been the two plays in which she had appeared.

Shaw later wrote Fanny's First Play specifically for McCarthy. The show was a hit, running for 622 performances. Clearly, McCarthy was a darling of the box office, but her husband's feelings for her soon cooled. In 1915, Granville Barker left to tour America with some Shakespeare plays he had directed. There, he fell in love with another woman. When he asked his wife for a divorce, it ended his creative relationship not just with her, but with Shaw as well.