The life of an actress is rarely easy, but Julia Glover had it harder than most. Born Julia Betterton to a family of 18th-century actors, she went to work early. By the time she was six years old, she reportedly had appeared more times on stage than most actors do in their entire lives. 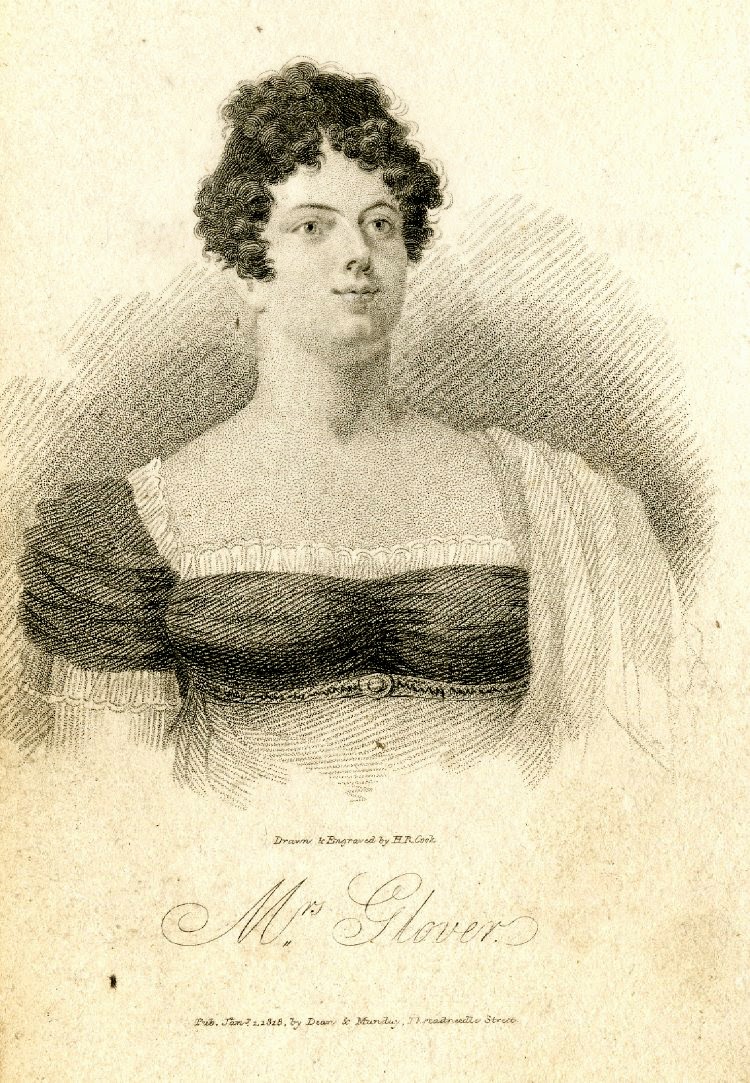 As a juvenile actress, she soon outshone her own father. Young Julia acted the part of the child Duke of York to George Frederick Cooke's Richard III. Her father drove hard bargains managing her career in the provinces, and in 1797 she made her London debut as Elvina in Hannah More's tragedy Percy.

While Mr. Betterton was living off of his daughter, he treated her horribly, and by one account even had her horsewhipped for slight or non-existent transgressions. Eventually, he decided to sell the goose that laid the golden eggs. In return for a thousand pounds, he agreed to coerce his daughter into marrying Samuel Glover, a so-called gentleman who was anything but.

Samuel said he loved Julia more than anything. He also said his bond for a thousand pounds was totally good. Mr. Betterton should not have believed him on either count. The two were married, and soon after, it was found that Glover's entire family had been reduced to poverty. Even had they still kept anything, Samuel wouldn't have received it. His father cut him off for marrying an actress, and Mr. Betterton was never paid.

Julia went from being forced to support a dead-beat parent to being forced to support a dead-beat husband. Fortunately, the theatres were willing to pay. John Philip Kemble gave her a three-year contract to play at Covent Garden. She played for four, and then after not getting what she asked for, left. In 1810, she joined the company of Drury Lane. Their theatre had burned down the previous year, so they were performing at the Lyceum, but when the new Drury Lane Theatre opened in 1812, hopes for the company were high. Though Julia was known for her comic roles, she did a turn as Alhadra in Samuel Taylor Coleridge's gothic tragedy Remorse. Even more memorable for her contemporaries were her portrayals of Mrs. Malaprop in Richard Brinsley Sheridan's The Rivals and Mrs. Candour in Sheridan's The School for Scandal. The real scandal, however, was her husband Samuel. In addition to living off of Julia himself, he used her earnings to support a mistress. When she discovered this, she left him. But as he was still her husband, he demanded that Drury Lane pay her salary directly to him. The theatre balked. He sued. He won.

As if that weren't bad enough, Samuel tried to get custody of their children, in spite of never having taken an interest in them before. Presumably, his real motive was to extract more money from his wife. Whether he got it or not, she kept custody of the kids. Her eldest daughter ended up making a fine actress, taking the role of Juliet opposite Edmund Kean in a production that featured Julia as the nurse. Julia went on to play numerous older characters as she continued to act well into her twilight years. She gave her final performance in the role of Mrs. Malaprop on July 12, 1850. She died four days later.

For all her tragedy in life, Julia never lost her comic timing. According to an anecdote, she was once gossiping with two other actresses after the renowned Madam Vestris had married fellow actor Charles Mathews. Supposedly, before Vestis had accepted the proposal, she had made a full confession of all her previous lovers. "What touching confidence!" cried one actress. "What needless trouble!" cried another. "What a wonderful memory!" cried Julia.

A woman of such wit deserved better in life.
Posted by James Armstrong, Playwright at 8:44 PM