This week, I was supposed to have arrived back from London just in time to see the opening of my new play, My Fellow Americans.
Well, I got back in time, alright, but then tested positive for a pesky virus. Fortunately, I haven't been near cast and crew since my return. That means the show will go on, and hopefully I'll be testing negative soon and will be able to see it for myself!
Where did I catch the bug? Well, I can't be sure, but the United Kingdom seems to be following the example of their outgoing Prime Minister in taking infections with as little seriousness as possible. I tried to mask whenever I could, but you have to take a mask off to eat and drink, which means that eventually you'll be vulnerable.
While there, however, I did get a chance to go back to Horace Walpole's estate at Strawberry Hill, where there is an exhibition on gothic toy theatres. The exhibition is titled "Cardboard Gothic: Damsels, Demons, and Heroes" and it contains miniature theatres from Pollock's Toy Museum. I was thrilled to be able to see so many toy theatres in such an amazing setting. For instance, take a look at this one: 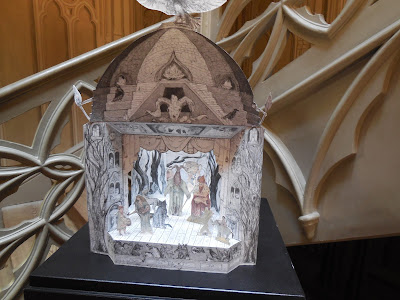 This modern toy theatre was made in collaboration with the Museum of Witchcraft and Magic in Cornwall. (Who knew there was such a place?) Though the design is modern, it was created using the same techniques used to print toy theatres all the way back in the Regency era. At Strawberry Hill, it is displayed at the foot of the grand staircase, leading up into Walpole's outlandish summer retreat.
During the early nineteenth century when toy theatres were popular, melodramas frequently dominated the stage, so it is no coincidence that many of these miniature stages enact melodramas. One example is the toy theatre version of The Mistletoe Bough by Charles A. Somerset. The play premiered at the Garrick Theatre on Leman Street in 1834. You can see here a toy version based on designs John Reddington executed sometime around 1859: 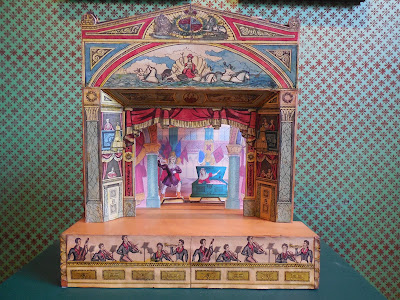 One of my favorite melodramas is Raymond and Agnes, also known as The Travelers Benighted, which retold the subplot of the Bleeding Nun from Matthew G. Lewis's novel The Monk. Here's a closeup of a toy theatre showing the key moment where the ghostly nun entreats the hero to protect the innocent heroine: 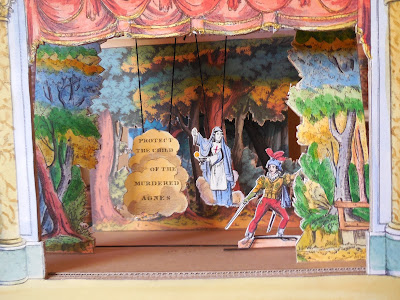 Horace Walpole's novel The Castle of Otranto has been adapted for the stage many times (including by me). On the toy theatre stage, however, it was generally seen in a spoofed version, Harlequin and the Giant Helmet, written by J.R. Planche. This toy theatre version issued by J.K. Green is currently on display in Walpole's library: 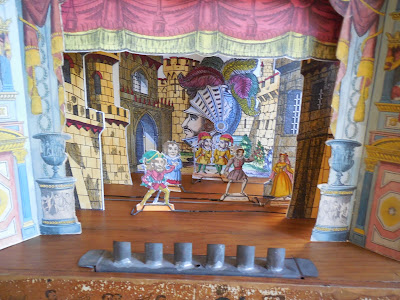 By far, the most popular toy theatre adaptations were of Isaac Pocock's melodrama The Miller and His Men. This 1813 play ended with a spectacular onstage explosion, which young theatre fans could re-enact in paper, looking something like this: 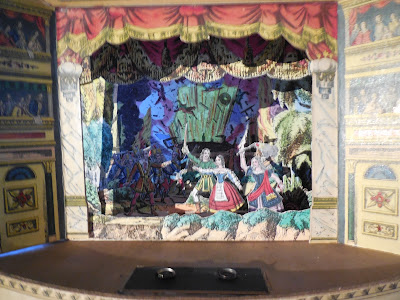 If you happen to find yourself in London between now and September 14th, when the exhibition closes, you'll definitely want to go to Strawberry Hill to see it. Just make sure you wear a mask! We need to try to keep the drama onstage...
Posted by James Armstrong, Playwright at 6:56 PM