In 1833, composer Hector Berlioz married Harriet Smithson, but she had enjoyed a distinctive career on her own as an actress long before she became Madame Berlioz. 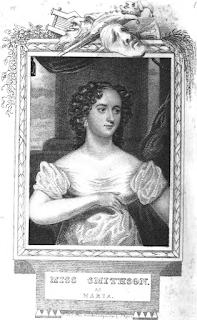 According to her entry in Oxberry's Dramatic Biography, Smithson was born on March 18th, 1800 in County Clare, Ireland, of English parentage. Her father, William Smithson, traced his ancestry back to Gloucestershire, but worked managing theatres in the Waterford and Kilkenny circuit.
At first, young Harriet's parents had great ambitions for her, and they actively kept her away from the stage, but after hard times fell upon the family, the young girl seemed their only hope. She made her stage debut in Dublin as Albina Mandeville in Frederick Reynolds's play The Will, and subsequently began to perform across Ireland.
In 1817, Smithson was introduced to Robert William Elliston, who was then manager of the Birmingham Theatre Royal. It was while performing in Birmingham that she caught the attention of the management of the Theatre Royal at Drury Lane in London. She made her debut at that theatre on January 20, 1818 as Letitia Hardy in Hannah Cowley's comedy The Belle's Stratagem.
Since her brother was manager of an English theatre in Boulogne, Smithson performed both there and in Calais. She made her Paris debut in 1827, performing the role of Lydia Languish in Richard Brinsley Sheridan's The Rivals. Charles Kemble's company, touring in France, then took her on to play Ophelia in Hamlet, and she made quite a stir with her mad scene. Kemble was apparently impressed, as he subsequently cast her opposite himself as they played the leading roles in Romeo and Juliet.
Berlioz saw Smithson perform as Ophelia in 1827 and promptly became obsessed with her. She was reportedly the inspiration for his Symphonie Fantastique, as well as other works of his. He also wrote her numerous love letters, which she failed to answer. Berlioz was three years younger than her, and not yet particularly well known. He also could just barely speak English. The young composer entreated her to meet with him. She declined.
Smithson returned to London, this time performing at the rival Theatre Royal at Covent Garden rather than Drury Lane. Unfortunately, the reviews were harsh. She toured a bit, joined the company of the smaller Haymarket Theatre, then eventually went back to Paris to set up her own troupe in 1830. She performed in English at the Théâtre-Italien, but the next year she broke her leg and had to put her whole career on hold.
Then, in 1832, there was a performance of Lélio, Berlioz's sequel to Symphonie Fantastique. She had missed Symphonie Fantastique's premiere in 1830, but this time she thought she'd give that mad Frenchman's music a try. That's when she figured out that this crazy twenty-something kid who'd been stalking her was a musical genius. She agreed to meet with him, and the next year they were married.
Sadly, their marriage was not the happiest. They never really got along with each other's families and friends. Plus, her career had already peaked, and his was just beginning. She became jealous of his success, not to mention of the mistress he picked up at the Paris Opera. Still, her performances were both inspired and inspiring, and for that, she should be remembered.
Posted by James Armstrong, Playwright at 8:39 PM