The Wolves of Kean

The actor Edmund Kean was notoriously associated with wolves, and in fact presided over a social group known as the "Wolves Club" that drank heavily and mocked the pretensions of the aristocracy.
Kean's infamous Wolves Club allegedly met at a pub known as the Coal Hole, which I visited in London back when the United Kingdom was still open to foreigners. In 1815, members of the club gave Kean a gold medal featuring an image of a lone wolf. 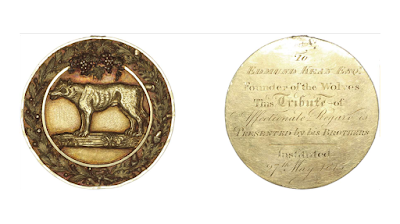 The Wolves Club had stopped meeting by 1817 when Junius Booth tried to star in a production of Richard III at Covent Garden. Unfortunately, a few nights earlier, Booth had disappointed a packed audience at Drury Lane, where he had been scheduled to act opposite Kean in Othello. Kean's fans took this as a slight, especially since Richard was a role associated with their hero, so they all showed up at Covent Garden, less than pleased.
Apparently, Booth couldn't even be heard amid all the uproar. He tried to apologize to the audience, but they refused to be quiet long enough for him to do so. Eventually, he came out wearing a placard stating "I have acted wrong..." The disaster was the talk of the theatre world, and a great embarrassment for Thomas Harris, the manager of Covent Garden. The artist George Cruikshank created a satirical print making fun of the whole affair, showing the theatre fans as well-dressed wolves. 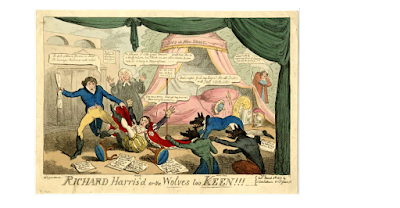 Two years later, another satirical print came out making fun of a dispute Kean and Drury Lane's manager, Alexander Rae, had with the playwright Charles Bucke. Poor Bucke's tragedy The Judgement of Brutus had been a failure, but then Kean starred in a suspiciously similar piece by John Howard Payne called Brutus; or, The Fall of Tarquin. Bucke kept at it, and submitted a play called The Italians which had a role explicitly written for Kean. While the play was in rehearsal, however, Kean refused to proceed, stating he would rather pay a thousand pounds than have to perform the role. Three wolves guard Kean in a rather funny cartoon on the matter. 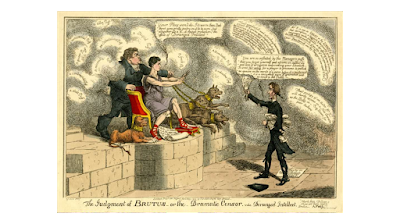 Later, when Kean got embroiled in a lawsuit over his affair with Charlotte Cox, Cruikshank's brother Isaac Robert created a print showing a whole audience full of wolves watching Kean perform on stage. As you can see, wolf imagery was frequently associated with Kean and his fans. 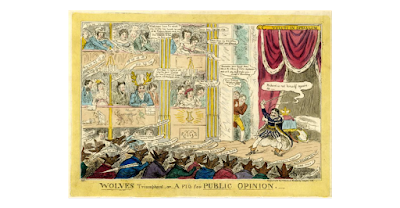 Posted by James Armstrong, Playwright at 8:33 AM