Edmund Kean has gone down in history as one of the greatest (though not one of the most beloved) actors of Shakespeare. The exact date of Kean birth is disputed, but in his book The Flash of Lightning, Giles Playfair concludes Kean was born on St. Patrick's Day, 1789. 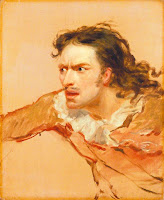 Poor Kean was the illegitimate son of Ann Carey, whose grandfather wrote popular songs like "Sally in Our Alley" before he committed suicide by hanging in 1743. Kean's father left the child with nothing but his own name, Edmund Kean, when he jumped off the roof of his house and died. Young Kean was three at the time.

Kean was raised primarily by Charlotte Tidswell, the reputed mistress of his uncle. According to Playfair, Tidswell "beat him, locked him in his room, tied him to his bedpost and--more ingenious--encircled his neck in a large dog collar, with her name and address inscribed on it." Though she mistreated the boy, she also introduced him to acting, and by the time he was eight, Kean had already played some small rolls at Drury Lane.

However, it was in the provinces that Kean truly learned his trade. He did not make his adult debut in London until January 26, 1814, when he appeared at Drury Lane as Shylock in The Merchant of Venice. Due in part to bad weather, the house was less than a third full. Kean cast aside the traditional red wig used for Shylock, as well as the traditional stage business used for the character. The audience was amazed, as was William Hazlitt, the reviewer for the Morning Chronicle. "No actor had come out for many years at all equal to him," Hazlitt wrote.

After the performance, Kean rushed home to his wife Mary and son Charles. Supposedly, he greeted his wife with the cry: "Mary, you shall ride in your carriage and Charlie shall go to Eaton." Indeed, they both did. Kean was a sensation; he single-handedly reversed the fortunes of Drury Lane, which was on the edge of bankruptcy. His acting provided his family with riches and his son with a first-class education.

Though most known today for Shakespearean roles like Richard III and Othello, Kean was equally popular as Sir Giles Overreach in Philip Massinger's A New Way to Pay Old Debts. Upon seeing him in the role, Lord Byron went into convulsions. Byron adored Kean's acting, but the admiration was not mutual. Kean once left a dinner Byron was holding in his honor, supposedly so he could dine with some boxers.

While Kean was ruling the stage at Drury Lane, Eliza O'Neill appeared at Covent Garden, creating a sensation as Juliet. The committee that ran Drury Lane insisted Kean play Romeo to compete with the new actress, but Kean's Romeo was weak. He was better at acting villains.

Perhaps that's not surprising considering how Kean courted scandal in his private life. A jury fined him 800 pounds for "criminal conversation" with Charlotte Cox, the wife of an alderman. To many, such social climbing seemed worse than the adultery itself.

Mary ended up raising Charles largely on her own, though the father paid for the boy's education. Much to Edmund's dismay, Charles took to acting, a horrible blow to his father's ambitions.

Kean's last role was acting Othello to his son's Iago. It was March 25th, 1833. The scene this time was Covent Garden, and it was the first time father and son had acted together on a London stage.

Halfway through, Edmund Kean collapsed into his son's arms. He whispered into his ear: "Oh God, I am dying. Speak to them for me." Two months later, he was dead.
Posted by James Armstrong, Playwright at 8:09 AM