As crowds throng to Leicester, England to mark the re-burial of what might be the remains of Richard III, defenders of that monarch often complain bitterly about how Shakespeare maligned the poor man. The murderous king didn't kill nearly as many people as the Bard said he did, they argue, or at least no one can prove it! And besides, usurpation and bloodshed were common in the Middle Ages, sort of like Napster in the early 2000s. Yeah, it might have been wrong, but almost everyone else was doing it, so what's the problem? 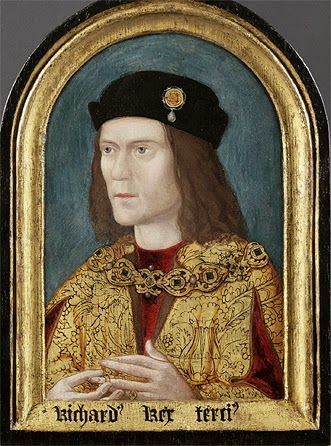 In many ways, however, the villainous reputation of Richard III came not so much from Shakespeare's play, but from a later adaptation of that play done by the actor Colley Cibber. In addition to reducing the number of characters and focusing more on Richard himself, Cibber brought offstage acts of violence right before the audience's eyes. While Shakespeare seems to show some sympathy for Richard, particularly toward the end of the play, Cibber never lets us forget he is a villain.

I had always assumed that Cibber wrote the adaptation with himself in mind for Richard, but as Riki Miyoshi points out in a recent article in Theatre Notebook, Cibber originally wrote the part for another actor, Samuel Sandford. Known as the best villain of the Restoration stage, Sandford excelled as the title character in Thomas Porter's 1662 play The Villain. He went on to play more villains in Thomas Otway's Alcibiades and Nathaniel Lee's Caesar Borgia. Sandford became so linked to villainous roles, that when he played an honest man in Aphra Behn's The Widdow Ranter, the audience was furious.

Cibber, by contrast, was known for playing comical fops. Miyoshi notes Cibber scored a great success in 1693 as Fondlewife in William Congreve's The Old Batchelor. Cibber later wrote the fop part of Sir Novelty Fashion for himself in Love's Last Shift. By the time he adapted Richard III, Cibber was firmly ensconced in the minds of audiences as a comedic actor, and one specializing in parts nothing like Richard.

Miyoshi argues that Cibber tailored the role of Richard to suit Sandford's strengths as a stage villain. Unfortunately, by the time Cibber wrote his play, Sandford's health had failed, plus he had signed a contract with a rival company, anyway. Without Sandford available to play the role, Cibber decided to act it himself.

The result was a disaster. Cibber tried to copy Sandford's voice and mannerisms, but the audience hated him in the role. One observer noted that:

Ouch. Cibber's failure in the role did not prevent the adaptation from being performed throughout the eighteenth century, and in fact even some modern productions make use of a few of Cibber's additions. Those changes to Shakespeare's play seem to have stemmed not just from Cibber himself, though, but from Sandford's reputation as an excellent stage villain.
Posted by James Armstrong, Playwright at 9:12 PM