Marathon theatre can always be fun. The Royal Shakespeare Company taught Broadway how to do it when the RSC brought David Edgar's eight-and-a-half-hour adaptation of Nicholas Nickleby to the United States. I still wish I had gotten to see the second half of Robert Schenkkan's The Kentucky Cycle in 1993, but I was in college and only had the time and money to see the first half. Fortunately, I did see all of Rose Rage, which reduced Shakespeare's Henry VI plays into a mere four hours. 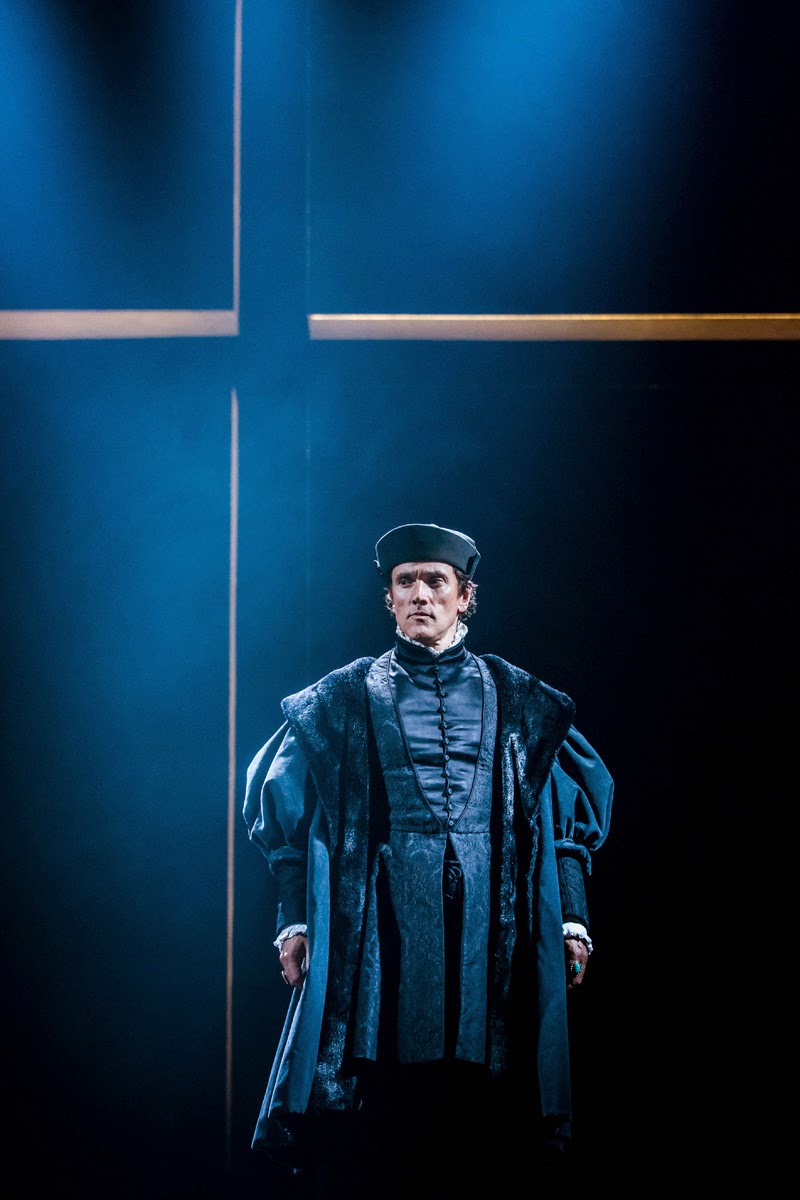 Yesterday, I got the chance to see Wolf Hall, both Parts One and Two, the latest marathon theatre event to hit New York. As with Nicholas Nickleby, this production comes from the RSC, but instead of adapting a behemoth novel by Charles Dickens, it adapts two Man Booker Prize-winning novels by Hilary Mantel: Wolf Hall and Bring Up the Bodies.

Though you can see Parts One and Two on different days, I recommend seeing them all at a go, getting Part One in with a matinee, and then seeing Part Two in the evening. Depending on whether you see it on Saturday or Sunday, this will give you two-and-a-half to three hours between shows to get dinner and relax before jumping into the next half.

In Part One, we watch the low-born lawyer Thomas Cromwell (played by Ben Miles) maneuver a way to help King Henry VIII (Nathaniel Parker) annul his marriage to Katherine of Aragon (Lucy Briers), all so he can marry the vivacious and power-hungry Anne Boleyn (Lydia Leonard). At the end of this first part, Henry has finally married Anne, but is already tiring of her. In a brief moment, he glimpses the beautiful Jane Seymour (Leah Brotherhead) at her family's estate, Wolf Hall. Their eyes lock, and we see that poor Cromwell will have to go through the whole mess all over again.

While the ending of Part One is effective, it leaves you ready to see what happens next, and I was glad to be able to return for Part Two after only a brief break. (Long enough to walk to the New York Public Library, stick my head into the World War I exhibit, walk back, and have a leisurely meal at Lillie's, just a couple blocks from the theatre.) As Machiavellian as Cromwell is in Part One, he is even more ruthless in Part Two. That part ends with a bit more closure, though it still makes you wish Mantel would hurry up and publish the third book in the trilogy. (That book, The Mirror and the Light, is scheduled to come out sometime this year.) 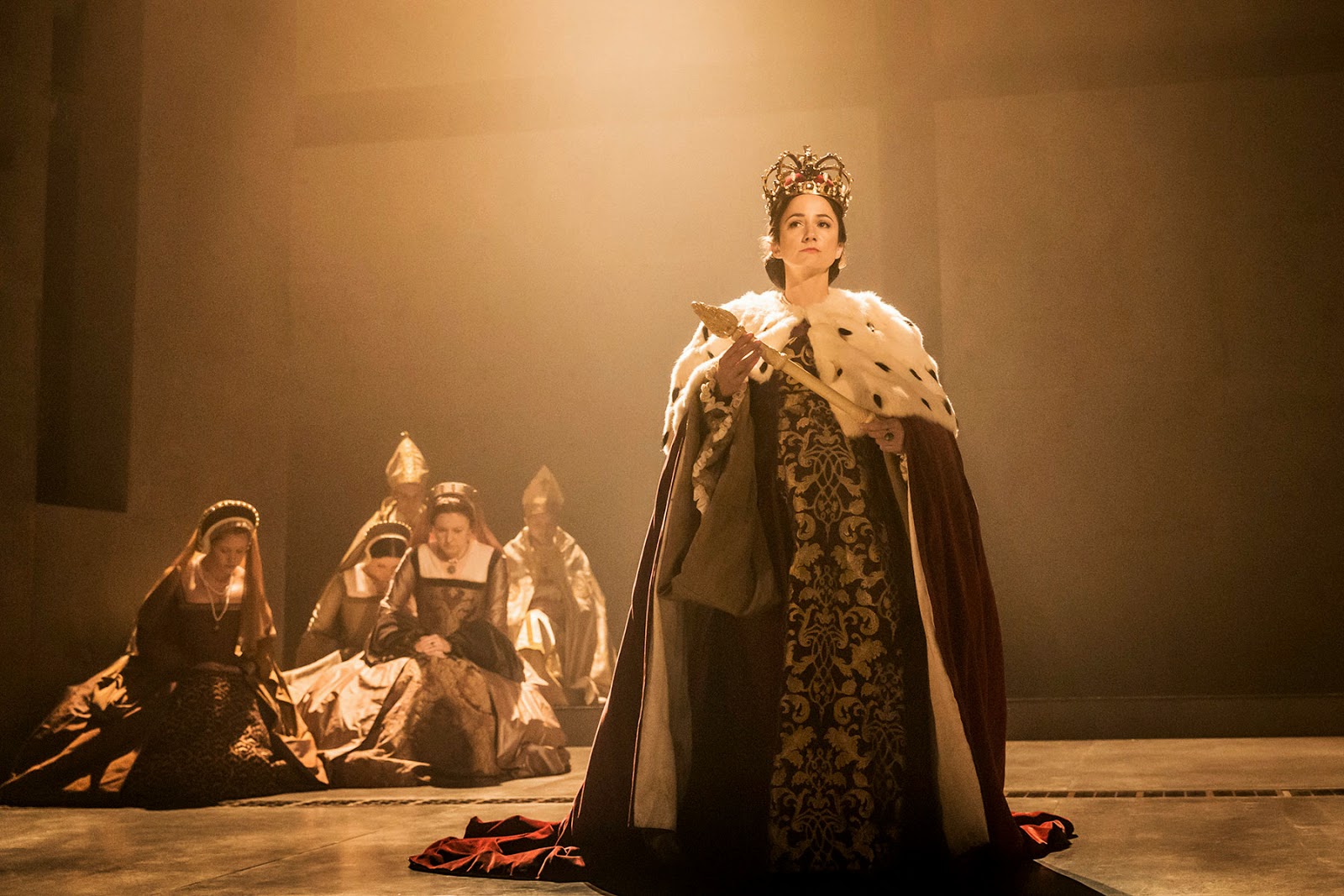 What makes Mantel's telling of the story so interesting is her unorthodox characterizations of the characters. Anne Boleyn, besieged heroine of Maxwell Anderson's Anne of a Thousand Days, becomes a shrewish, scheming, vengeful tyrant, who probably did do all those awful things she was charged with in her trial. Thomas More, the saintly hero of Robert Bolt's A Man for All Seasons, becomes a prideful religious zealot dedicated to burning every last heretic in England. And Cromwell, murderous, bloody, torture-loving Cromwell, become the hero!

Not that he's particularly heroic as he pulls down one person after another into an early grave, but the play forces us to sympathize with him. He has a loving and honest relationship with his wife Lizzie, though she completely disagrees with the king sidelining Queen Katherine. He also clearly loves his daughters, whom he educates just as much as his sons. When a deadly fever causes Cromwell to lose so many whom he loves, the audience can't help but to feel for him.

Also surprising is the portrayal of Cardinal Wolsey, the corrupt Archbishop of York who never even visited his own diocese, instead preferring to cavort with his mistresses and scheme how to get his way at the Vatican. Though Shakespeare makes Wolsey into a tragic figure in Henry VIII, he never lets us forget that the man is an overreacher. Wolf Hall, by contrast, makes Wolsey out to be a pleasant man, friendly and generous, who just wants a comfortable life and a nice college as Oxford as his legacy. In the end, he gets neither. 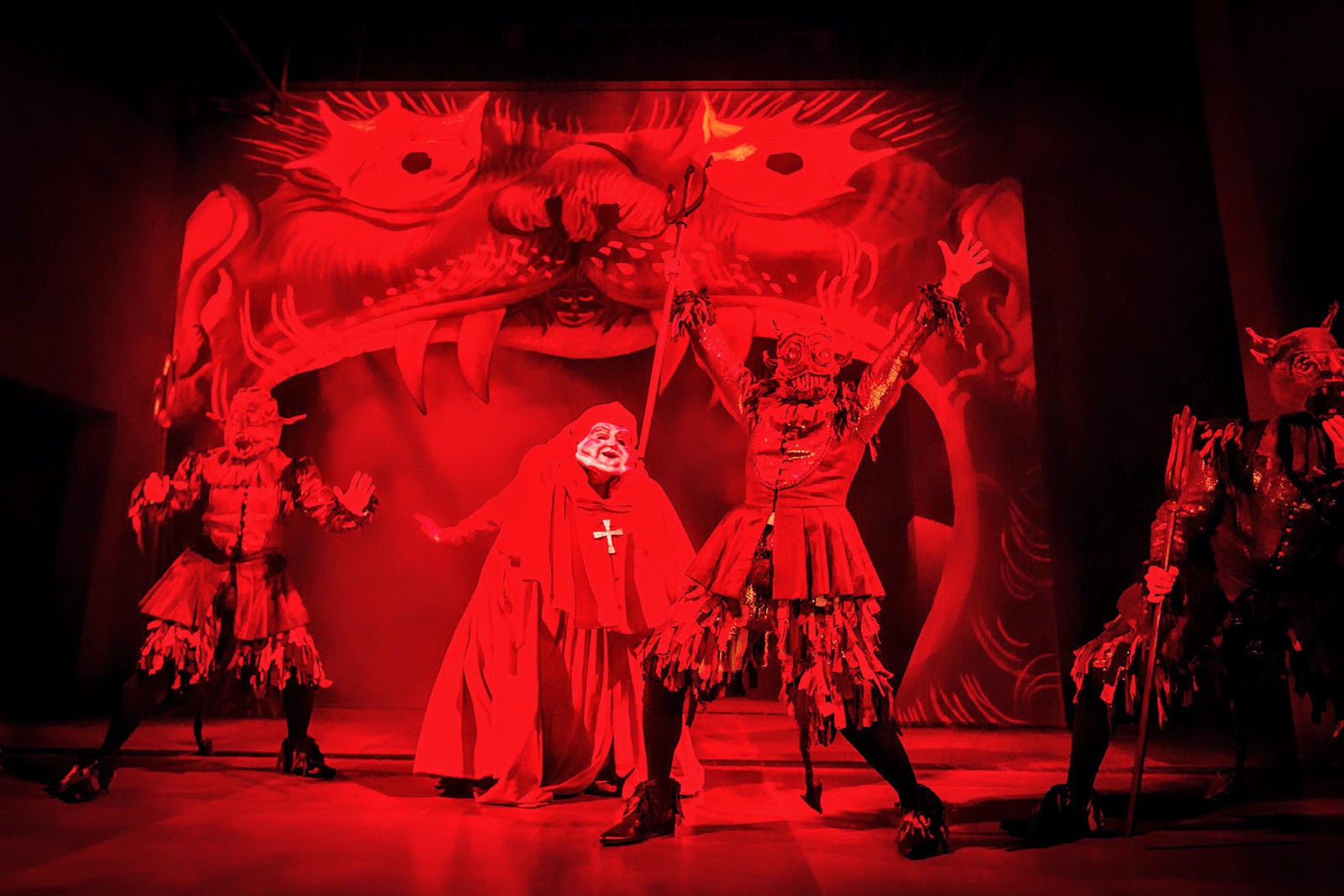 In a central scene, Anne has a masque staged in which devils drag a man dressed as Wolsey off into a Hellmouth. All of the courtiers cheer, with the exception of the poet Thomas Wyatt, who cries out that the whole performance is shameful. Cromwell, who formerly served the cardinal, does not forget Wyatt's act of decency, nor does he forgive those who laughed and jeered at his late employer.

The most striking production element was the sparse but effect set designed by Christopher Oram, who also designed the magnificent set for Kenneth Branagh's Macbeth at the Park Avenue Armory last year. Giant grey squares form a cross at the back of the stage, which can be lit in various ways. Above the stage, an evocative but mysterious metal grid hangs over everything. Occasionally, fire burst up from the floor. The set beautifully compliments the muted period costumes, also designed by Oram.

Wolf Hall is playing until July 5. There are a limited number of $39 rush tickets, plus discounts available for students. For more information, check out the show's website here: 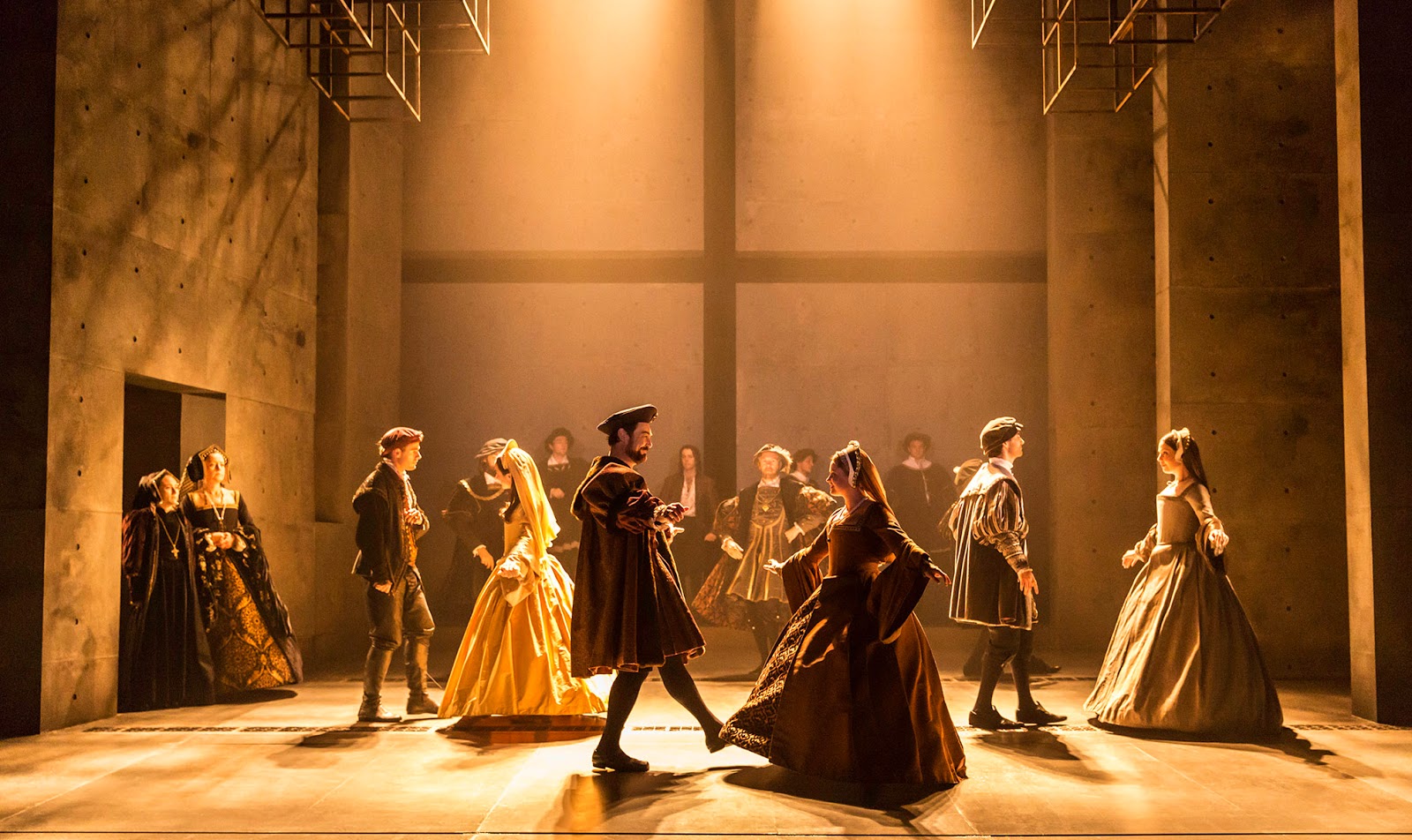 Posted by James Armstrong, Playwright at 10:36 AM