Hannah More's tragedy Percy, which premiered at Covent Garden in 1777, was probably the most successful English verse tragedy of its era. Incidentally, the play opened the same year Richard Brinsley Sheridan's The School for Scandal premiered at Drury Lane. Why has that play been remembered and More's drama largely forgotten?

The tragedy concerns Elwina, a noblewoman who in childhood was promised by her father to Lord Percy of Northumberland. After perceiving a slight from the lord, he instead married Elwina off to Percy's enemy, the Scottish nobleman Lord Douglas. The play begins in a "Gothic Hall" where Elwina pledges obedience to her husband. Unfortunately, obedience is not enough for Douglas. He cruelly upbraids her, saying:

Heart-rending word!—obedience? what's obedience?
'Tis fear, 'tis hate, 'tis terror, 'tis aversion,
'Tis the cold debt of ostentatious duty,
Paid with insulting caution, to remind me
How much you tremble to offend a tyrant
So terrible as Douglas.—O, Elwina——
While duty measures the regard it owes
With scrupulous precision and nice justice,
Love never reasons, but profusely gives,
Gives, like a thoughtless prodigal, its all,
And trembles then, lest it has done too little.

The king returns from the Holy Lands, and with him returns Percy, who participated in the latest crusade. (Anachronistically, the medieval lady Elwina disapproves of the crusades, criticizing them in distinctly Protestant terms, even though Martin Luther hasn't been born yet.) Douglas is jealous of Percy, and he condemns Elwina as an adulteress, saying she has betrayed him even if she never committed the deed in the flesh. As he puts it:

Will it content me that her person's pure?
No, if her alien heart dotes on another,
She is unchaste, were not that other Percy.
Let vulgar spirits basely wait for proof,
She loves another—'tis enough for Douglas.

News comes of Percy's death, but this doesn't comfort Douglas. When his wife weeps for Percy, he says that "If she laments him, he's my rival still."

The third act opens with Percy very much alive, and apparently unaware that Elwina has wed his enemy. More could have explained the marriage as one forced through strength of arms, but instead she explores the subtler forms of emotional intimidation parents can use against their children. Though her father did not raise his hand against Elwina, he forced the marriage nonetheless. As she explains it:

I could withstand his fury; but his tears,
Ah, they undid me! Percy, dost thou know
The cruel tyranny of tenderness?
Hast thou e'er felt a father's warm embrace?
Hast thou e'er seen a father's flowing tears,
And known that thou could'st wipe those tears away?

Though Elwina has been robbed of her peace of mind, her one consolation is that she has retained her fame, which she describes as "a rich jewel" she must keep "spotless, and unsoil'd."

Douglas discovers his rival has returned alive and stabs Percy's friend Harcourt, who was carrying a message to Elwina. In Percy's intercepted letter, he declines to return a scarf Elwina once gave him. For Douglas, this is proof positive of adultery. What he doesn't know is that Elwina gave him the scarf years earlier when they were young, and before she had even met Douglas.

Percy and Elwina meet in a garden, but she shuns his passion, explaining that emotions can be the enemies of virtue. Chastising desire, she tells him:

Heaven, when it gives such high-wrought souls as thine,
Still gives as great occasions to exert them.
If thou wast form'd so noble, great, and gen'rous,
'Twas to surmount the passions which enslave
The gross of human-kind.—Then think, O think,
She, whom thou once didst love, is now another's.

Douglas enters and tries to kill Percy, but the two instead resolve on fighting a proper duel.

In the next act, Elwina hears of the duel while waiting in her own chamber. Douglas returns, having slain his rival and sent a cup of poison for Elwina to drink. Dutifully, she drinks the poison, but when her husband finds out that she never gave Percy leave to see her since her marriage, Douglas begins to feel remorse. It is too late, of course, and Elwina has a magnificent death speech:

Soft, soft—no violence—he's dead already;—
I did it—Yes—I drown'd him with my tears;
But hide the cruel deed! I'll scratch him out
A shallow grave, and lay the green sod on it;
Ay—and I'll bind the wild briar o'er the turf,
And plant a willow there, a weeping willow—

Though More provides some striking poetry, her sentiments do not align well with modern concerns. It's interesting to see a man who is jealous even if adultery has not been consummated, but Douglas's change of heart at the end seems to work against this idea. Elwina's father is interesting at times, but he remains a minor character, and his motives are never fully explored.

The one character who really does stand out is Elwina, and that part continued to attract star actresses for years to come. Sarah Siddons played the role at Drury Lane in the 1780s, and Eliza O'Neill later excelled in the part, receiving "rapturous applause" when she first performed it in 1815. For all of the play's flaws, it still offers an opportunity for a talented tragedienne. 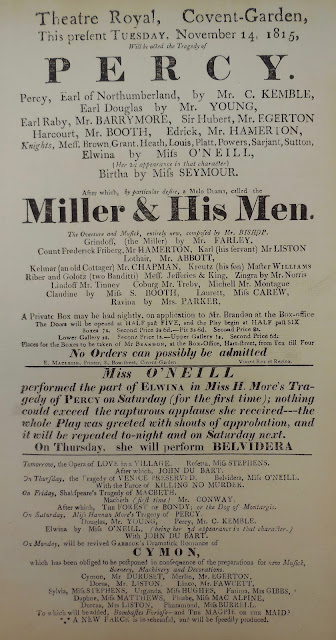 Posted by James Armstrong, Playwright at 7:25 AM