In 1819, the former actress Elizabeth Macauley wrote a pamphlet called Theatric Revolution, or Plain Truth Addressed to Common Sense. The pamphlet addressed the mistreatment of actors by the two patent theatres at Drury Lane and Covent Garden. Macauley argued that actors must band together for their common good, and for the common good of society. 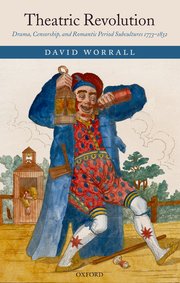 David Worrall, a professor of English at Nottingham Trent University, used Macauley's pamphlet as the title for his 2006 study of Georgian theatre Theatric Revolution: Drama, Censorship, and Romantic Period Subcultures 1773-1832. He argues that the close physical proximity of radical presses and seditious meeting-places to the great theatres in London was no mere coincidence. Both radical politics and its reactionary critique were intertwined with the theatre culture of the day.

In his first chapter, Worrall discusses the regulation of the theatres, examining both the patent system that gave Drury Lane and Covent Garden a monopoly on serious spoken drama, and the censorship system that gave an inordinate amount of power to one man, the Examiner of Plays. Beginning in 1824, the playwright (and son of a playwright) George Colman the Younger was the Examiner, which shows just how incestuous the whole system was. His first year in office, Coleman censored so many passages in Martin Archer Shee's tragedy Alasco that the playwright withdrew the piece from production at Covent Garden. He subsequently published the play with a preface objecting to Coleman's censorship, and by the end of the year Alasco was performed in New York.

Since the two patent theatres had a monopoly on spoken drama, minor theatres like the Royalty Theatre in the East End had to add music to plays, turning them into "melo-dramas" or "burlettas." Worrall's second chapter deals with attempts to suppress the Royalty, which the actor John Palmer built and opened in 1787. The theatre became the subject of a pamphlet war, with the partisans of the patent theatres arguing for its closure. The Royalty was denied a license in 1802, but then licensed again the following year. 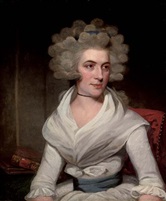 Worrall examines the role of the Examiner of Plays in his third chapter. Prior to Geroge Coleman taking over in 1824, the Examiner was John Larpent, and by extension his wife, Anna Margaretta Larpent. According to Anna Larpent's diaries, the couple read aloud all of the plays submitted for performance, and she seems to have given her husband considerable input. In 1795 the Larpents prohibited performance of Lady Mary Eglantine Wallace's play The Whim, a comedy in which an aristocrat, after reading about the Roman custom of Saturnalia, decides that for a day his family will trade places with their servants. Even though the play ends with the confirmation of the social order, this was too much.

Chapter Four deals with the famous scenic designer Philip de Loutherbourg, who was also a Freemason. His 1773 extravaganza A Christmas Tale contained a great deal of Masonic symbolism. Charles Dibdin provided music for the piece, which had a text by David Garrick. After the outbreak of the French Revolution, some critics of Freemasonry linked the Masons to the radical Jacobins, and by the late 1790s the Masonic imagery in A Christmas Tale "had become politically dangerous." The play was not performed for many years, though the Surrey Theatre did stage it in 1817, after anti-Mason (and anti-Jacobin) hysteria had quieted somewhat.

In the fifth chapter, Worrall examines the censorship of The Two Farmers by Thomas Dibdin, Charles Dibdin's son. Though the play was scheduled for performance at Covent Garden in 1800, it ran afoul of the Larpents. Britain had recently experienced grain shortages, and many people blamed farmers for allegedly hoarding their crops. The Two Farmers introduced a villain named Locust who hoarded grain in order to raise prices and justified his actions as being "for the good of the nation." Larpent's blue pencil made quite a number of cuts, and ultimately the censor rejected the play in its entirely. 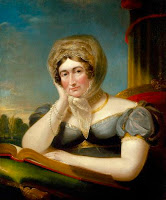 Chapter Six examines the return of Caroline of Brunswick, the wife of the Prince Regent who returned from self-imposed exile after George III died, making the Prince now King George IV, and Caroline--in theory at least--the queen. However, the king cruelly barred her from the coronation ceremony in 1821, and Caroline died only a few days later. Her return to England featured high-profile attendances at London theatres. At a private party in Montague House, Queen Caroline was even presented to guests as a statue that came to life, a scene consciously reminiscent of the last scene in Shakespeare's The Winter's Tale.

The following chapter looks at theatricalized popular British culture. Worrall notes that drama took place well outside even the "minor" theatres in London and official theatres of the provinces. For instance, the actor Peter Paterson performed a 12-minute version of Matthew G. Lewis's The Castle Spectre at fairgrounds around Birmingham. Audiences could also see spoofs such as W.T. Moncrieff's Frank-in-Steam, or, The Modern Promise to pay, which was performed in 1824, only a year after the English Opera House debuted Richard Brinksley Peake's Presumption; or, The Fate of Frankenstein, the first adaptation of Mary Shelley's novel.

Chapter Eight looks at two plays, the anonymous closet drama Plots and Placemen and James Powell's Drury Lane confection Harlequin Negro. Attributed to on "Zachary Zealoushead," Plots and Placemen satirizes the suppression of radicals during the Regency. The powerful foreign secretary Lord Castlereagh becomes "Callouswretch" and Lord Sidmouth, the widely reviled home secretary, becomes "Proudmouth." This might seem an odd pairing with Harlequin Negro, an 1807 play that Larpent approved without any excisions. However, Powell's play contains what Worrall calls "a vivid moment of empowerment changing the oppressed black Caribbean slave into a gorgeously costumed comic hero." Both plays, then, were furthering the agenda of Britain's radical progressives.

Worrall also includes a chapter on plays inspired by the infamous 1817 murder of 20-year-old Mary Ashford. The young woman went to a dance in Warwickshire one night, and the next day her body was found in a flooded sandpit, probably raped. In 1818, the anonymous three-act plays The Mysterious Murder and The Murdered Maid appeared in print. Two other plays based on the events appeared on the London stage: William Barrymore's Trial by Battle and John Kerr's Presumptive Guilt.

In the final chapter, Worrall looks at the performance of the radical play Swing at the Rotunda, an improvised theatre space where the well-known radical Richard Carlile staged Robert Taylor's five-act tragedy Swing; or, Who Are the Incendiaries? This "People's Tragedy" seems to have been performed with a cast of two, a man named Harrison and Taylor, who at one point appeared as himself under his nickname "Robert the Devil." The shockingly revolutionary play shows the proletarian Swing made king, but he then abdicates so that Britain can become a republic. Carlile hoped to collaborate with Taylor on a second play, but the latter's alcoholism rendered that impossible.

Overall, the picture that emerges of Georgian theatre in Theatric Revolution is one that is far different from the staid Shakespeare revivals people generally associate with that era. Writers like Martin Archer Shee, Eglantine Wallace, Thomas Dibdin, James Powell, and Robert Taylor were constantly pushing the envelope, staging--or attempting to stage--plays that engaged politically with the ever-changing world around them.
Posted by James Armstrong, Playwright at 10:49 AM