The New York City Fringe Festival opens on Friday, and this year there were quite a few plays I wanted to see. Yesterday I went down to Fringe Central and picked up my tickets. Here are the shows I plan to see, in the order I'll be seeing them: 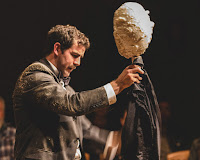 This performance piece is a collaboration between two brothers from Austria, actor Christopher Domig and painter Daniel Domig. The Waste Land presents T.S. Eliot's classic poem... with the aid of a giant puppet head. What could be better than that? The Domig brothers have been developing this piece for years, and now New Yorkers are going to get a chance to see it. Though the poem was written by a man, the speaker is (by Eliot's account) the Countess Marie Larisch, so it will be interesting to see the text performed by a man. Fiona Shaw probably did the most famous dramatic performance of the poem.

Lady Macbeth and Her Lover

This play by Richard Vetere (The Engagement) tells the story of two writers who make a suicide pact. One of them lives, while the other posthumously wins the Pulitzer Prize. The dead woman's daughter then demands that the survivor become her literary mentor. Sasha Brat directs this new drama, starring Maja Wampuszyc (Foggy Bottom) and Jenny Ashman (Romance Language).

The wicked commander is found murdered. And who committed the crime? "Fuente Ovejuna did it, sir!" Ducdame Ensemble (which was founded by graduates of the London Academy of Music and Dramatic Arts) presents this classic play by Lope de Vega. Previously seen in London, the production plays up the parallels between the 15th-century historical incident in Castile that inspired Lope and the Occupy Movement of recent memory.

The Merchant of Venice

This FREE outdoor production by the Hip to Hip Theatre Company is currently touring the outer boroughs, but it will be settling down in Tompkins Square Park for a Fringe Al Fresca run at the park's bandshell. Hip to Hip artistic director Jason Marr and dramaturg Adriana Alter have adapted Shakespeare's classic comedy as a parable about how not to live in a multi-cultural world. David Mold directs a cast that includes William Oliver Watkins (of Moby-Dick fame) among others.

The Broccoli Murder, DiCaprio Dance and Other Stories From My 20 Years as a NYC Cop

The title says it all. Peter Michael Marino directs this one-man play by Mark DeMayo, a retired NYPD detective with an arresting past. Now a comedian, DeMayo previously worked at the 26th Precinct in Harlem. The New York Post recently cited him in a snarky article about fanny packs. Though this one-man show might not have the gravitas of Freight, it is precisely the type of show the Fringe loves to do.

In this production by Los Angeles-based New Circle Artists, Misha Bouvion adapts and performs Shakespeare's erotically charged poem with the help of director Daniella Caggiano. The show got good reviews in California, and a similar project, a one-man performance of Shakespeare's other long poem, The Rape of Lucrece, recently took Philadelphia by storm. (But Shakespeare's twist on the sexy story from Ovid is probably easier to take than a tale of rape and suicide!)

So there you have it! The Fringe Festival is always hit or miss, but I'm hoping this year my selections won't leave me disappointed.
Posted by James Armstrong, Playwright at 7:52 AM